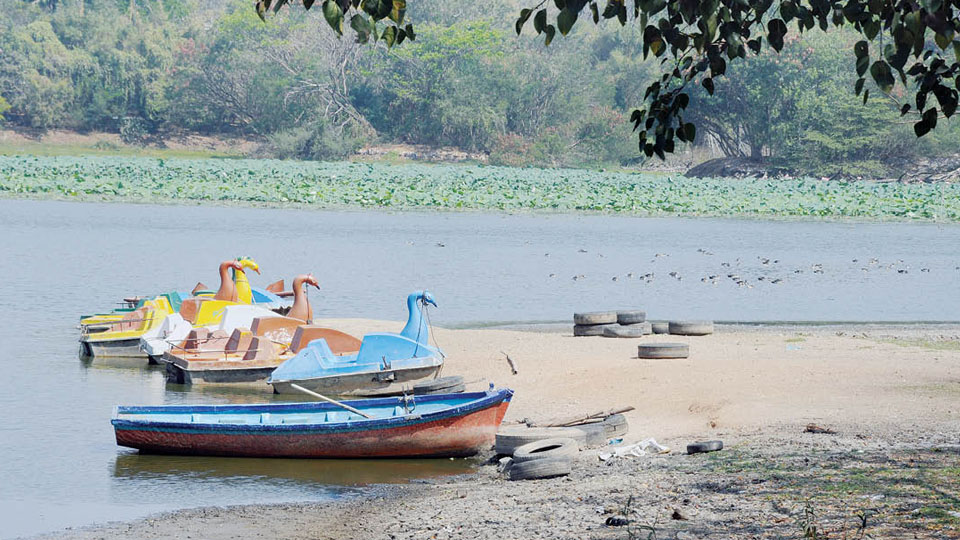 Luck seems to have run out for our Karanji Lake, though not completely. It is a place which I visit on most mornings with my wife. While she goes there for her morning walk, I go there for my morning stroll. Yes, there is a difference in our missions. While she spends her time there walking briskly to get her exercise like most other morning walkers, I spend my time strolling at a rather leisurely pace, getting more exercise for my mind than body.

To tell you the truth, being a bookworm, I’m actually not much of a walker, preferring any day to take my car out for its morning walk than for my own! I stop to look at every bird, wondering why it keeps bobbing its head or wagging its tail the way it does or to look at every bamboo shoot, making a mental record of how much it has grown in a week. From the waterside bench on which I sit and read my newspaper I also try to pry into the private life of a pair of nesting crows that is now trying to start a family. But, mind you, being the respectable man that I am, I do this only from a very respectable distance as the tree on which they have built their nest is on an island in the centre of the lake. I also try to count as accurately as possible the number of migratory pelicans that have now made the lake their home for the past one month while simultaneously assessing the growth and development of the many baby spot-bill ducks that abound there. It is a real joy to watch their antics. Very often, a lame peacock that only walks with much difficulty accosts me and perches itself on the back of my bench peering over my shoulder into my newspaper. Whenever it feels that there is nothing more to read it jumps off and scampers away!

A fellow daily walker, Rajinder Jain, who meets me often, says that my peacock friend seems to have a special kinship with me as he never sees it going close to anyone else. When I am done with the birds I look down at the many kinds of bugs and ants scampering around my feet to see what they are having for their breakfast! If I find a snail I spend a good deal of my time observing how much like me it leisurely explores its surroundings with its antennae before crawling to its destination. Now, the destinations of snails are a topic about which I simply know nothing, simply because I never have enough time to see where they end their journeys! Occasionally, when I am lucky enough to find a spider I stand and watch how deftly it builds its delicate but deadly web without getting the sticky strands entangled one bit. I envy it very much because it is always such a difficult task for me to get the wires of my mobile phone and camera chargers untangled whenever I take them out of my travel bag. But most of all, during my observations at Karanji I never fail to make a note of the water level in the lake. This I do by checking which rock it touches on the sides of the nearest island and I have found this to be an accurate enough method to serve my purpose.

READ ALSO  Do we need such a ‘festive’ Dasara?

Now, if all that I do here is not enough exercise for one mind on one day I do not know what else is. I have noticed that unlike in the past many years, this year the water level in the lake has been dipping rapidly even before the summer has set in. This is largely due to the stoppage of the inflow of raw sewage through the open drain that runs directly from Siddhartha Nagar to the lake. I was very distressed over the past few years that such a pristine lake had been turned into a virtual and had even written a couple of articles about it which sadly did not change its sorry state. What was most alarming was that the Zoo authorities had even allowed commercial fishing in such a contaminated lake. It is good that someone in power has finally that raw sewage is not very good for the health of our water bodies and has taken some corrective action. But now that there is no inflow of water into the lake, it seems destined to dry up completely and remain so all through the three hot summer months till the rains replenish it once again. But if this is allowed to happen, all the aquatic flora and fauna in and around it will perish which is a tragedy that needs to be averted at all costs. This can only be done by pumping in fresh water into the lake periodically which seems very impracticable because of the scarcity of water during the summer months

So the next best thing to do seems to be to pump in safely treated sewage water which is exactly what the Zoo authorities are now planning to do according to a recent press report. It is only a much compromised solution because the idea of keeping alive a water body with a diet of sewage seems rather sad. So I am inclined to helplessly say that trying to do some good is sometimes better than doing nothing. However, I would like to add here that the idea of pumping water from the sewage treatment plant only till the base of the Chamundi Hill and then let gravity do the work through the Rajakaluves seems rather far-fetched as more than half the water is likely to be lost en-route through seepage and percolation.  Nothing will work as efficiently as a direct pipeline all the way. So if a pipeline is laid from a tank at the base of the hill till the very edge of the lake, gravity can then be expected to do a free job.  But we should not stop here. We should look back into how this beautiful lake that was artificially built by our far-sighted Maharajas along with the Kukkarahalli Lake to increase the water table within the city, survived on its own over the last one hundred years and try to give it a new and more respectable lease of life!

A parting shot from the General !

After my last article in the special issue of the Star of Mysore about how patients these days read about their symptoms and then also check their doctors’ advice and prescriptions on the internet, I received this cartoon from Maj. Gen.(Retd.) S.G. Vombatkere. It very aptly sums up the sentiments on the doctors’ side! Hats off to you, General !