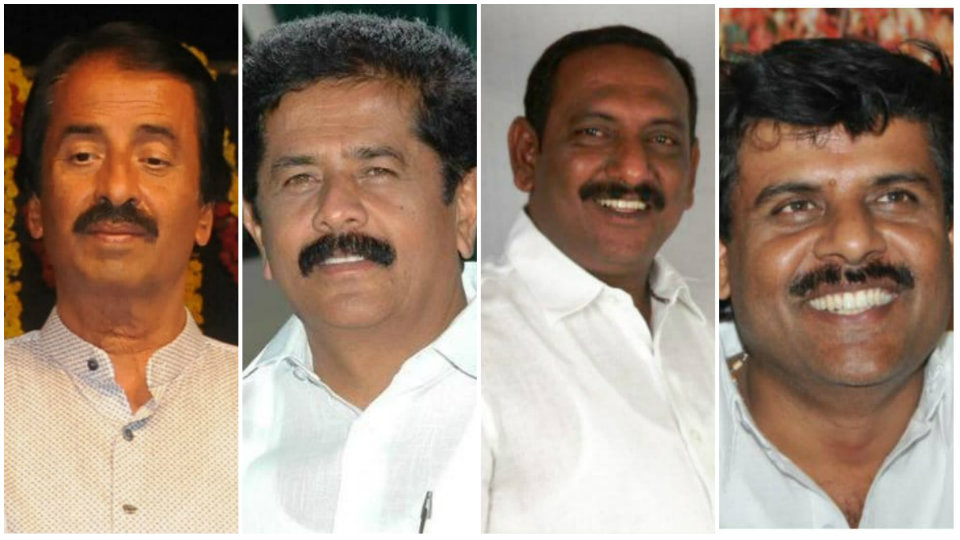 Chamaraja Congress candidate Vasu, who lost the Assembly polls to BJP’s L. Nagendra, has said that he would respect the voters’ mandate. Maintaining that he was not disappointed over the result, Vasu, who had won from Chamaraja in 2013, said that his defeat in last week’s election, may also be due to anti-party activities by some local Congress leaders and it was left to the party High Command to take action against such leaders. Pointing out that he was satisfied with his work as MLA, he hoped that the new BJP MLA would take forward the initiatives he (Vasu) had taken for the development of the Constituency.

Blaming the malfunctioning of EVMs for his defeat in KR Constituency, former Congress MLA M.K. Somashekar has said that he would lodge a complaint with the Chief Electoral Officer (CEO) in this regard. Claiming that he had taken up a lot of projects for the overall development of the Constituency, he thanked all those who had voted for him.

Alleging that malfunctioning of EVMs and voter list manipulation were responsible for his defeat, NR BJP candidate Sandesh Swamy claimed that many of his supporters could not cast their vote due to voter list manipulation. Maintaining that he had received tremendous response from the people during campaign, Sandesh Swamy said that he was very much surprised by the victory of Congress candidate in NR Constituency.

Pointing out that the SDPI candidate has already complained against EVMs, Swamy said he too had lodged a complaint with the Election Commission for malfunctioning of EVMs and VVPATs.

Money power cause for my defeat: K. Harish Gowda

Chamaraja rebel JD(S) leader K. Harish Gowda, who had contested as an independent candidate after the party denied him the ticket, said that money power unleashed by his opponents was the main cause for his defeat.

Claiming that the people were very much eager to elect him, Harish Gowda said that, however, his opponents together hatched a plot to defeat him.

Thanking the voters, he said that despite the loss he would carry on with his good work in Chamaraja Constituency.

I had banked on educated class: Prof. K.S. Rangappa

Defeated Chamaraja JD(S) candidate Prof. K.S. Rangappa said that he does not know the art of trickery. Stating that despite his loss, he would continue to serve the people, Prof. Rangappa, a former VC of University of Mysore and KSOU, said that he had expected a win as he had banked on the voters of the educated class, scholars, academicians and the like. ‘But I respect the people’s mandate and will continue to serve the people in my capacity as an academician,’ he added.

Even as some unsuccessful candidates blamed the malfunctioning of EVMs and VVPATs for their defeat, Deputy Commissioner (DC) Abhiram G. Sankar, who is also the District Electoral Officer (DEO), has said that it was impossible to hack the EVMs and VVPATs. He said that the allegations            were unfounded.