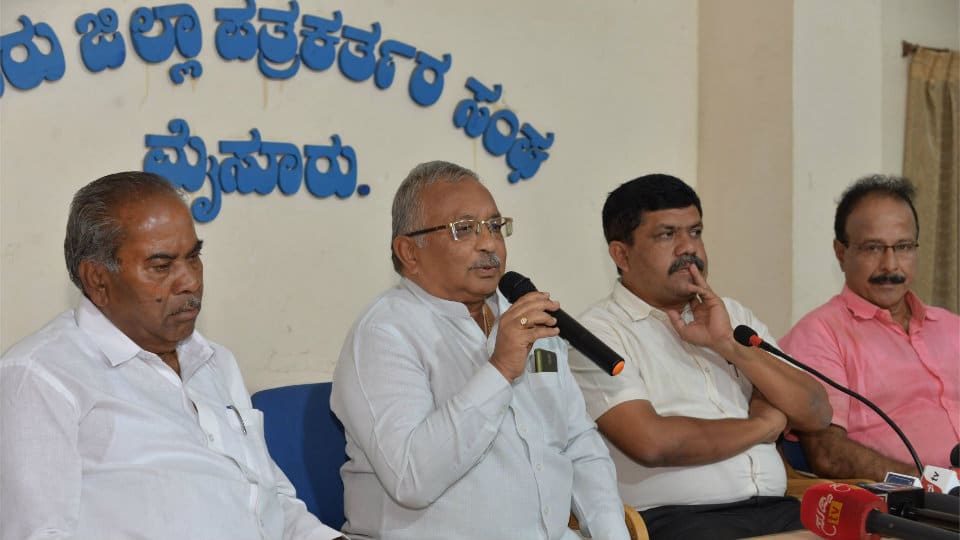 Karnataka Assembly Polls-2018: We will win, say all political parties

Mysuru: At an interaction meet organised at Pathrakarthara Bhavan here this morning, leaders of Congress, BJP & JD(S) expressed confidence of their respective candidates winning in city. The interaction was organised by Mysuru District Journalists Association (MDJA)

Listing the failures of the NDA Government at the Centre, he said that Prime Minister Narendra Modi is yet to keep the promises he had made ahead of the 2014 Lok Sabha polls.

BJP National Council Member and former KEA Chairman, B.P. Manjunath said that the Karnataka polls will be one step closer to make the country ‘Congress Mukta’ (free of Congress). Stating that Siddharamaiah had become a leader in his own right in the Congress, Manjunath said that the CM was only showing his arrogance and audacity by repeatedly saying that he will be the CM once again.

Maintaining that fear of defeat in Chamundeshwari was haunting Siddharamaiah, Manjunath sarcastically said that the CM, who is currently thinking of contesting from two Constituencies, may contest from three as the polling date draws closer.

Accusing the Congress of following ‘Divide and Rule’ policy, he said that the Congress Government went ahead with Tipu Jayanti celebrations when no one asked for it. Manjunath maintained that the Congress party’s appeasement of minority community was part of its vote-bank politics.

Expressing confidence that the BJP would return to power, he said that all the BJP workers were working overtime to ensure that the BJP’s ‘Mission-150’ is achieved.

JD(S) City President K.T. Cheluvegowda also said that the JD(S) will win all the four city Assembly segments including Chamundeshwari. Abdul Majeed, the leader of SDPI (Social Democratic Party of India) asserted that his party would win from N.R. Constituency, the lone seat where he is contesting.