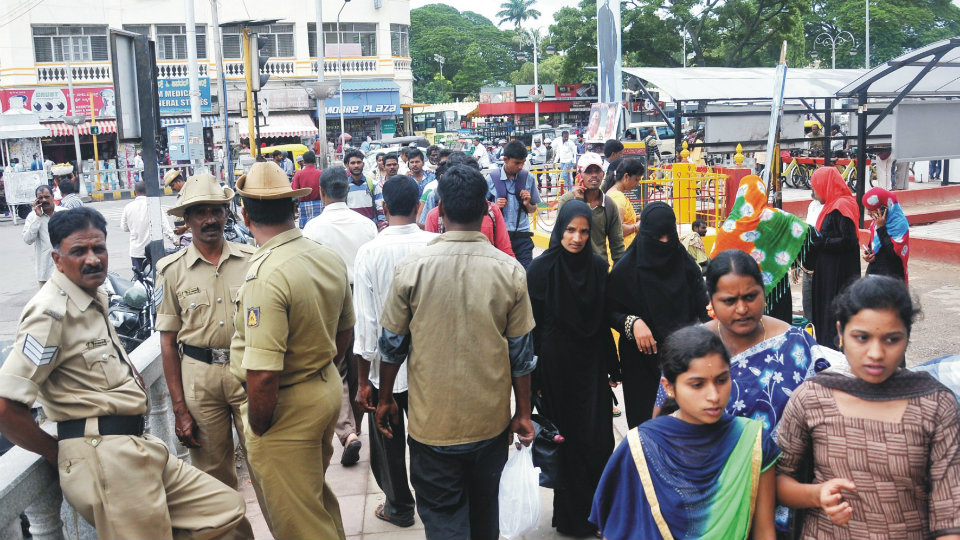 Mysuru: The Statewide bandh call by several pro-Kannada outfits today seeking resolution of Mahadayi water issue, a permanent solution for water woes in North Karnataka and other issues haunting the State, evoked poor response, as normal life continued in all parts of the city.

Transport services remained unaffected as KSRTC and private buses, autos, taxis, tempos, cabs etc., plied as usual, with no untoward incidents reported from any part of the city.

Schools, colleges and other educational institutions, hotels, banks, petrol bunks, cinema halls, government offices, commercial establishments, post offices and all other public offices functioned as usual. There was no disruption in lorry services and the Courts also functioned.

The Police provided tight security at vantage points in the city as a precautionary measure. Speaking to Star of Mysore here this morning, DDPI H.R. Basappa said all schools have remained open in the city and there have been no reports of forcible shut down of schools.

Mysuru Hotel Owners Association President C. Narayanagowda, speaking to SOM, said there were about 750 food outlets in the city, including hotels, restaurants, eateries, bakeries, fast food, chat centres, etc., and all of them are open. The Association had not supported today’s bandh, he added.

Meanwhile, prominent tourist destinations in and around the city such as Zoo, Palace, Chamundi Hill, etc., witnessed usual flow of tourists. However, the early morning intermittent drizzles kept people indoor for some time.

Karnataka Bandh Vatal Nagaraj
“PM Modi is not a person, he is an institution”
Pourakarmikas begin indefinite stir in city