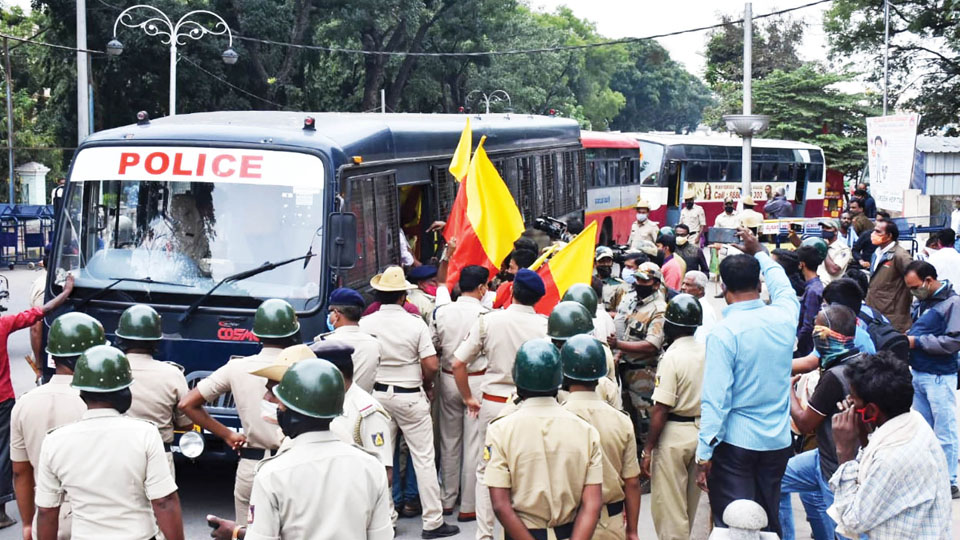 Mysore/Mysuru: The dawn to dusk State-wide bandh called by pro-Kannada groups today opposing the B.S. Yediyurappa Government’s decision to create an Authority for Maratha community has had no major impact on normal life so far, other than sporadic protests and demonstrations.

Kannada organisations are demanding that the Government give up its decision to form the Maratha Development Authority (MDA). Yediyurappa had announced the formation of MDA on Nov. 14 and earmarked Rs. 50 crore for the ‘overall development of Maratha people’.

Bus and train services operated as per the normal schedule and Karnataka State Road Transport Corporation buses ran as usual. Petrol pumps remained open and hotel owners and travel operators did not close their businesses but extended moral support to the bandh.

Also, most of trade and business associations extended only moral support and as such, normal life was largely unaffected. Banks, eateries, markets and other commercial establishments remained open. The Central Business District witnessed its usual buzz with traders and other vendors doing normal business.

On the educational front too, the bandh had no effect, with all degree and post-graduate degree colleges, which had re-opened just a fortnight ago following the relaxation in COVID-19-induced lockdown regulations, remaining open today as usual.

Devaraja, Mandi and Vanivilas Markets in the heart of the city witnessed a good number of shoppers. The bandh was limited to protests at City Bus stand, Agrahara Circle and a few other major public joints.

No untoward incidents were reported from any parts of the city. However, several Kannada activists were taken into preventive custody. The Police took Kannada Chaluvali leaders Mugur Nanjundaswamy, Thayur Vittalamurthy, Balakrishna, Basavaraj and others into custody when they tried to stop buses from moving out of the City Bus Stand.

The Mysuru Hotel Owners Association, which had extended only moral support to the bandh, staged a symbolic demonstration at Gandhi Square. Association President C. Narayanagowda and other office-bearers took part.

Members of Mysuru District Chaluvaligarara Sangha led by their President Shivashankar staged a broomstick protest seeking immediate scrapping of the Corporation. The Police led by DCP (Law and Order) Dr. A.N. Prakash Gowda had made elaborate security arrangements all across the city.

Poor response in other parts of the State

Elsewhere in the State too, the bandh drew a poor public response with normal life remaining mostly unaffected. KSRTC buses plied as usual and shops, Government offices, higher education institutions, commercial and business establishments remained open as usual. Barring a few stray minor ones, no major untoward incidents were reported from any part of the State till we went to the press.