Home » News » Karnataka Housing Board scam back to haunt G.T. Devegowda ahead of Assembly polls 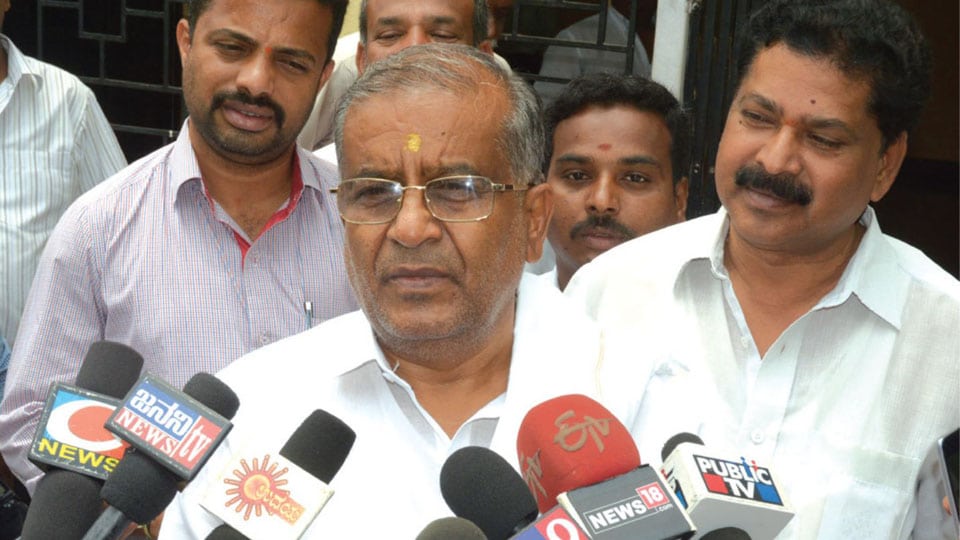 Karnataka Housing Board scam back to haunt G.T. Devegowda ahead of Assembly polls

Mysuru/ Bengaluru: The Karnataka Government’s move to restart probe into the case against Chamundeshwari JD(S) MLA and former Chairman of Karnataka Housing Board (KHB) G.T. Devegowda (GTD), his son G.D. Harish Gowda and others kicked off a political slugfest yesterday.

The FIR comes at a time when GTD is set to lock horns with Chief Minister Siddharamaiah from Chamundeshwari in Mysuru in the ensuing Assembly elections. The case, investigated by the Lokayukta, was transferred to the Anti-Corruption Bureau (ACB), which is being seen as a political strategy to take on GTD in the high-stakes battle. The move is seen as a ploy to cow down Devegowda.

An FIR was filed against Harish and several others in connection with a 2014 scam alleging that farmers near Mysuru were cheated on the pretext of buying land for a housing project. The case, in which relatives of GTD are accused, was transferred from Lokayukta to ACB on Dec. 1, which filed a chargesheet before the Third Additional District and Sessions Court on Dec. 18.

GTD headed the KHB during the BJP regime when he was in that party. He is accused of irregularities in the acquisition of land for a housing project. The KHB acquired 81 acres at Gungralchatra, Kallur Naganahalli and Yelachenahalli.

G.T. Devegowda is a native of Gungralchatra. The charge is that while KHB paid Rs. 36.50 lakh per acre, the farmers got only half the amount. Middlemen had taken General Power of Attorney for the land and paid the farmers between Rs. 8 lakh and Rs. 18 lakh per acre ahead of the acquisition, and pocketed at least Rs. 15 lakh per acre. They asked the farmers to open bank accounts as the money was paid directly, and withdrew the money by forcing the farmers to sign blank cheques.

READ ALSO  KHB sites to beneficiaries through draw of lots

In reaction, G.T. Devegowda termed the move to transfer the case to ACB as deliberate. “Siddharamaiah, who has decided to contest from Chamundeshwari constituency in the 2018 Assembly election, is employing these methods to stop me from winning again,” he said.

He termed the swift developments related to the case as a conspiracy hatched by the CM after his attempts to woo him to Congress had failed.

2018 Assembly polls ACB probe G.T. Devegowda Karnataka Housing Board
If you send GTD to Jail, we will ensure he wins from there, HDK tells CM
Man says daughter was forced into inter-religious marriage