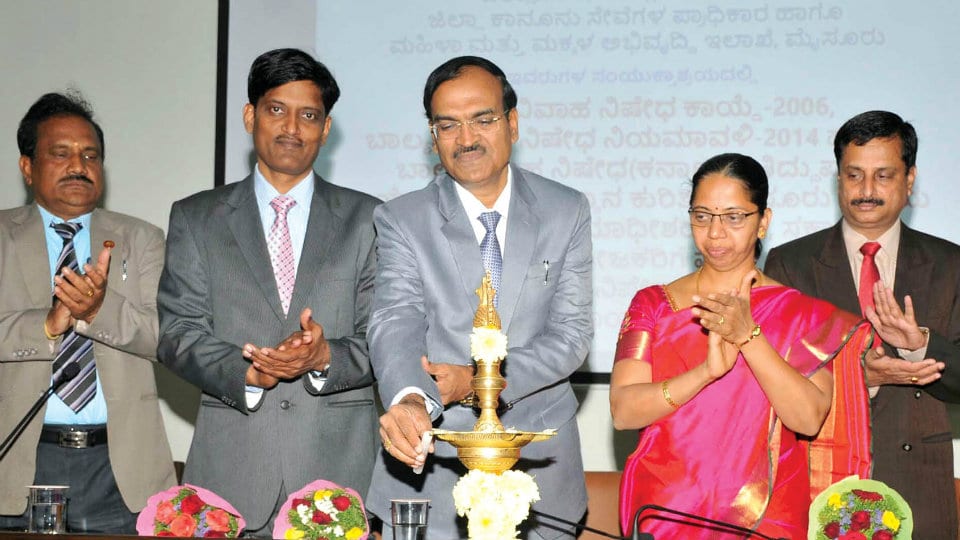 58 cases reported in Mysuru in the last 10 months

Mysuru: Principal Civil Judge Senior Division Sunil A. Shettar disclosed that Karnataka State is still witnessing 23 percent of child marriage though the State and Central Governments have enacted various laws for prevention of the same.

Stating that of every 100 marriages in the State, 23 are child marriage, despite awareness and preventive measures undertaken by the Governments to put an end to this social evil, he said, “this statistics tells that such evil cannot be prevented by laws alone.”

Karnataka State Government too must come up with similar cash incentive schemes to completely stop child marriages in the State, he added.

ZP CEO K. Jyothi, who also spoke, said that 58 child marriage cases have been reported in Mysuru district in the last ten months though Child Welfare Department officials have been making all efforts to contain child marriage with the support of Police and Non -Government organisations.

“Cases have been registered against parents for encouraging child marriage in the district this year. Officials have also been making efforts to collect evidence to book cases against remaining parents. Public should co-operate fully to put an end to this practise and also other social evils,” she added.

Inaugurating the workshop, Principal District and Sessions Court Judge S.K. Vontigodi, who is also the Chairperson of DLSA, asked Judges to dispose the cases related to child marriage at the earliest.

Deputy Director of Department of Prosecutions and Government Litigation P.B. Dharannanavar wanted the officials to initiate stern action on the persons encouraging child marriage and other social evil.

In his address, DLSA Member-Secretary C.B. Devaramane called upon people to strive hard to root out this menace that violates the rights of children.

He also said that awareness programmes should be held to educate people about ill-effects of child marriage and health risks to be faced by girls who marry before completing 18 years of age.