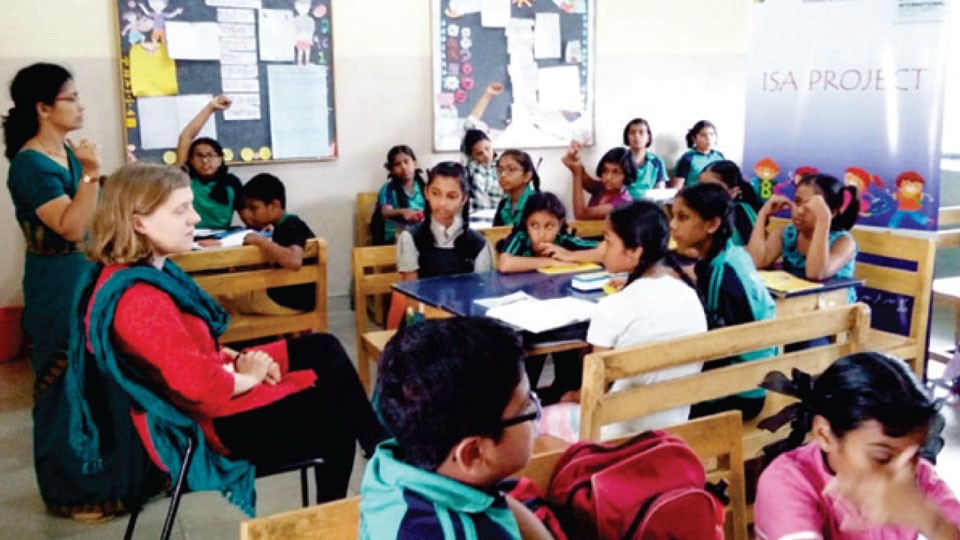 Hence, the institution has been accredited for the period 2018-21. The outcome is owing to the co-ordinated efforts of teachers and students spread over the entire academic year 2017-18. Students from KG to Grade IX participated in seven age-appropriate, thought-provoking curricular projects, three of which involved collaboration with a foreign school.

The tiny-tots of UKG identified the outline map and National Flag of India, China, Nepal and Bangladesh. They studied the shapes and colours of the National Flags and re-created models of the same using clay. They learnt the ways of respecting a National Flag and demonstrated the same through a skit.

The little ones of grades I and II studied some of the common types of houses in India, Japan, Indonesia and Finland and correlated it to the geographical features. They learned to distinguish between temporary and permanent shelters; met personnel involved in the construction of a house and acknowledged the role of the latter through a role-play.

The young ‘explorers’ of Grade III studied about the non-motorised means of transport in India, Canada, UAE and Italy, namely bullock cart, sledge, camel and gondola. They correlated the same with the geographical features of the countries. They attended a talk by an environmentalist on the benefits of non-motorised means of transport and promoted the use of the same by creating charts.

The ‘naturalists’ of Grades VI and VII identified some of the native plants of India, Oman, Malaysia and Russia by surfing the internet and compiled the information in a scrap book. They studied the characteristics of herbs, shrubs and trees and classified the identified  plants accordingly. Prof. Shivmurthy, Chairman of Botany Department (Retd), University of Mysore, explained the health benefits of the native plants of these countries. The students then created posters advocating the use of these native plants.

The ‘pet lovers’ of grade IV identified some animals/ birds kept as pets in India, Canada, Germany and Singapore. They visited the People For Animals (PFA) shelter and Shukavana to study the professional care given to needy animals and birds. Residents of Canada and Germany responded to their queries on pet care through questionnaires.

The fourth graders of Discovery Charter School Two of the United States of America answered their questionnaire. The students then created a thinking organiser to differentiate the care provided to different pets in these countries and performed a street play asking people to be kind to animals.

The ‘travellers’ of grade five met the local Traffic Police to learn about the road safety rules for pedestrians and cyclists in India. They learnt about the same through questionnaire sent to residents of UAE and Australia. The fifth graders of Discovery Charter School Two of the United States of America answered their questionnaire. They then compiled a road safety manual incorporating the best practices from the given countries to improve road safety in India.

The ‘civilians’ of Grades VIII and IX learnt about the form, composition and structure of the Governments of India, North Korea, Republic of China and Kingdom of Saudi Arabia. They surfed the internet to identify the merits and demerits of the forms of governance.

The ninth graders of Al Khozama International School, Kingdom of Saudi Arabia, responded to their queries on governance in their country through questionnaire. They evaluated the findings and suggested ways of improving governance in India through a report presented in the school assembly.