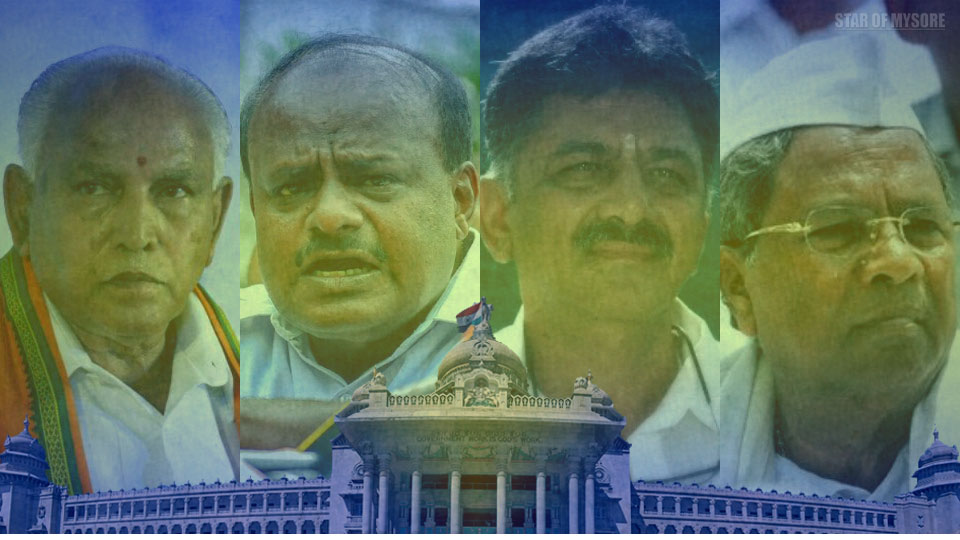 Yesterday was Saturday and the whole country watched with bated breath the Saturday Political Fever of Karnataka. Voting was on May 12, 2018 and when the results came on 15th May 2018 the numbers were as follows: BJP 104, Congress 78, JD(S) 38 and others 2.

The exit polls predicted a hung Assembly with the exception of Today’s Chanakya and Yours Truly. Both of us were not too far off the mark though, what with BJP crossing the two-digit mark with a shortfall of 8 for the magic number of 112 while others, Congress with 78 and JD(S) with 38 remained two digits.

However, the FACT is that it was a fragmented mandate ending up with a HUNG Assembly.

It is said in jurisprudence, that he who is first in time is first in law. However, in democratic electoral battles this dictum does not hold good unless the numbers favour the party or the party-in-alliance. This exactly is what happened yesterday. Congress, having learnt its lessons about the importance of stitching up a coalition with the other willing parties to garner required numbers faster than the BJP, as it happened in Goa, Manipur and Mizoram, moved with lightening speed this time and joined hands with JD(S).

This done, the Congress-JD(S) combine staked claim to form the Government. Of course, BJP was faster than lightening when it approached the Governor, a BJP man. Here too Congress-JD(S) lagged behind by one hour! By the way, this tradition of appointing party men as Governors was laid down by the Grand Old Party (GOP) of India, Congress itself. The BJP staked claim to form the Government with a vague promise of cobbling up the magic number 112 while Congress-JD(S) has already had its majority with clear-cut figures.

But, an obliging Governor hurriedly got Yeddyurappa, the BJP’s LP leader, as the Chief Minister with no others sworn-in along with him. It looked funny and odd. What kind of a Cabinet he would head? And yet he had the audacity to transfer 5 IPS Officers as his first act as a fresh Chief Minister! Strange.

No wonder Congress-JD(S) combine after staking claim to be invited to form the Government went to the Supreme Court at midnight to stay the swearing-in of Yeddyurappa the following day at 10.30 am. The Supreme Court too must have wondered at the vulgar hurry of the Governor in agreeing to swear-in Yeddyurappa the next day May 17 morning and gave a night-long hearing till dawn to the Congress-JD(S) combine’s plea. But, the SC in its wisdom and because of the Constitutional power of the Governor, did not stay the swearing-in as prayed for.

However, the Supreme Court, in its Solomon-like wisdom, cut down the 15 days time given by the Governor to Yeddyurappa to prove his majority in a Floor Test in the Assembly, (Bommai case), to 24 hours+. And lo and behold this made all the difference because there was no time for BJP for indulging in ‘horse trading’ or ‘Operation Kamala’ for which Karnataka BJP is famous. And now the result is before us. The JD(S), which was derisively called an eternal King-maker in Karnataka politics and a party which was called by Congress and Rahul Gandhi himself as the B-Team of BJP and in his public speech sarcastically expanded JD(S) as Janata Dal Sangh (meaning RSS), has now become the King.

As I watched the Karnataka political drama unfold, I remembered a book by the veteran journalist and author, T.J.S. George, the only surviving highly respected commentator on Indian politics, “The First Refuge of Scoundrels — Politics in Modern India.” Needless to say the title was inspired by the statement of Samuel Johnson who famously said that ‘Patriotism is the last refuge of a scoundrel’. A collection of his articles, the book was first published in 2003. We are now in 2018. George’s observations are so very prophetic, nothing has changed in Indian politics since and it was the same in Karnataka politics yesterday.

According to George, INC means not Indian National Congress but Indian National Character and the INC was in brazen exhibition of this character the day-before-yesterday and also yesterday in the Supreme Court of India and the Karnataka Legislative Assembly. I know T.J.S. George is honoured with a Padma Bhushan but now, after watching the Karnataka politics, I recommend a Padma Vibhushan to George for his such precise surgical dissection of Indian mind when it comes to politics.

The Karnataka election 2018 has, however, exposed the hypocrisy of our politicians in compromising the very ideology of their party for the sake of power.

Take Indian National Congress. We can’t think of this party without thinking of Mahatma Gandhi. I know, even now, people past age-60 in remote villages and in poor habitats give vote to Congress because of their veneration to Mahatma Gandhi and Nehru. This party, having ruled India for over six decades in the Centre and States, has over the years manipulated or destabilised all the Constitutional Institutions. Why, the Constitution itself (remember 1975?). Be it Armed Forces, Election Commission, Law Courts, Bureaucracy, Universities and even Scientific Institutions. Now without power at the Centre and in almost all the States, INC is feeling breathless like a fish out of water. Hence ready even to shake hands with those who have absolutely no ideological or ethical compatibility with its manifesto. We have seen it in the form of ‘Award Wapsee’, raising the bogey of ‘intolerance, backing the January 12 ‘revolt’ of Supreme Court judges led by Justice J. Chelameswar, joining the unpatriotic sloganeering students of JNU and Delhi University, etc. Now INC wants to be the B-Team to Karnataka’s JD(S) with just 38 MLAs as against its own 78. What a fall in political honesty! An immoral act of political opportunism and an unholy alliance ignoring the aspirations of people who voted for its candidates. The unconditional surrender of Congress party to JD(S) reminded me of the unconditional surrender of Pakistan in the 1972 Bangladesh war. No wonder the utterances of the Congress President Rahul Gandhi carry suggestions that India would soon be like Pakistan. Who knows? It might if he becomes the Prime Minister! God forbid such a fate for India.

As for National BJP, its handling of Karntaka BJP seems flawed on many fronts. First, there seems to be an undercurrent of caste manipulation and presence of vested interest groups within Karnataka BJP. It cannot use B.S. Yeddyurappa, an acknowledged BJP leader, for just votes and then leave him at a loose end to fend for himself to salvage a difficult situation like he faced in 2008 [remember 2011 and then 2013 when he formed KJP?] Now, after winning 104 seats for BJP as against 78 of Congress and 38 of JD(S), poor Yeddy was pushed into the arena knowing there were two lions for him to face in the form of Congress and JD(S). Except for Reddy brothers, no other BJP senior leader seemed to have worked (like D.K. Shivakumar of Congress) to help Yeddyurappa to bridge the small gap.

But these are Ifs and Buts of political history. My sympathies are with Yeddyurappa and my congratulations to H.D. Kumaraswamy. Indeed, man seem to be a child of destiny in matters of birth, health, wealth, power and death. So be it. We must learn to accept what we cannot change.

TAILPIECE: This is what I wrote to a friend in Mumbai who had come to Mysuru to study the election. As for our opinions about the election, I am more inclined to agree with, I guess, Alexander Pope who said, “It is our reason as our watches are. None go just alike but each believes his own.” In my graduate class, I was taught that in India agriculture is a gamble. I would say likewise in India election is also a gamble. And let us not forget cheating is also part of gambling!