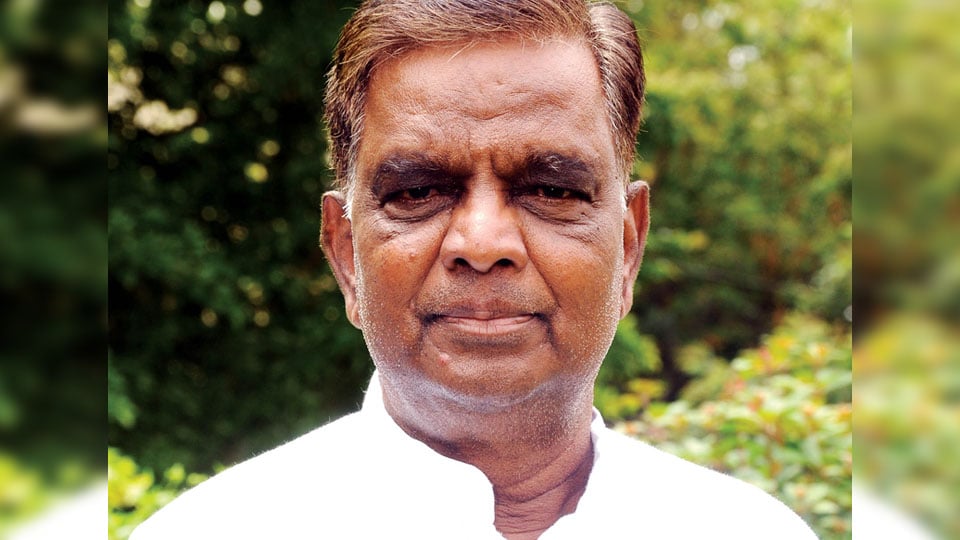 ‘I know every village because I have served them well’

Spending all day in election rallies meeting thousands of people, breakfast, lunch and dinner with his supporters and at night chalking out next day’s campaign strategies along with party leaders and campaign strategists, former Minister and BJP candidate for the prestigious Nanjangud by-election V. Sreenivasa Prasad agrees for a quick interview with Star of Mysore at a private guest house in Nanjangud. Here are the excerpts.

Star of Mysore (SOM): How is the public response so far and what will be the end result?

Sreenivasa Prasad: The response is overwhelming. There are over 2 lakh voters. Reports from the local Ward Committees and post-BJP election rallies are very encouraging. This is my home turf and I will win comfortably by a margin of at least 38,000 votes.

SOM: What makes you so confident?

Sreenivasa Prasad: I have been in politics since last 40 years and I have been a Union Minister.  I have conducted a series of “Swabhimani Samaveshas” after I was dropped from the State Cabinet. These meetings proved that my support base has not eroded and in fact, it has become stronger. Chief Minister Siddharamaiah must realise that I did not become a Minister because of his blessings but because of my seniority and merit.

SOM: Since when did you start preparing for election?

Sreenivasa Prasad: Though the election campaign picked up pace over the last week, I have been preparing for it since June 2016. The groundwork has been done and you will see the results on April 13. People here treat me like their family member and I have been amidst them. If you see the past election history from 1996, this fact is evident. I have brought R. Dhruvanarayan to politics and he is Chamarajanagar MP now. Unfortunately, he is speaking against me today.

SOM: Your opponents say you are inaccessible to the people.

Sreenivasa Prasad: The Congress should be asked this question. If I was inaccessible, would it be possible for me to win election after election? Unfortunately, the Congress, with a borrowed candidate (Kalale Keshavamurthy, a JD-S candidate in the past elections) is accusing me of being inaccessible. If the Congress was so popular, why did it fail to find a candidate even after the election date was announced? I know each village here in Nanjangud because I have served them well. Whenever they needed me I went there personally. This is not just boasting. You will see the results.

SOM: According to you what is the political status of BJP and Congress?

Sreenivasa Prasad: The BJP is the new Power Centre and an acceptable political party with Prime Minister Narendra Modi at the helm. The Congress is losing one State after the other. If you see the whole of South India, the only State where the party is in power is Karnataka. And you have seen what happened in the recent five-State Assembly elections.  Congress is a sinking ship.

SOM: The entire State Cabinet is here with the sole purpose of defeating you.

Sreenivasa Prasad: (laughs)…This shows that Siddharamaiah is scared. His only aim in life was to become the CM and it was me who suggested him to choose Varuna constituency. It was me who gave momentum for AHINDA (Kannada acronym for minorities, backward classes and dalits) and now Siddharamaiah is claiming to be an AHINDA leader. This is fake.

During the course of conversation, Sreenivasa Prasad questioned the “Effective Cabinet” as termed by CM Siddharamaiah after he reshuffled the Cabinet. “If it was about non-performing Ministers then why retain Ministers who are swindling money? As Revenue Minister I brought in various land policies, social security schemes like pension for widows, elderly and disabled people, and even common burial ground in villages, etc. Why did Siddharamaiah drop me? Let the people answer this question through their votes against Congress,” Prasad said and added that this by-election would expose Siddharamaiah’s hypocrisy and also his ingratitude to those who helped him in his political career by defeating the Congress.