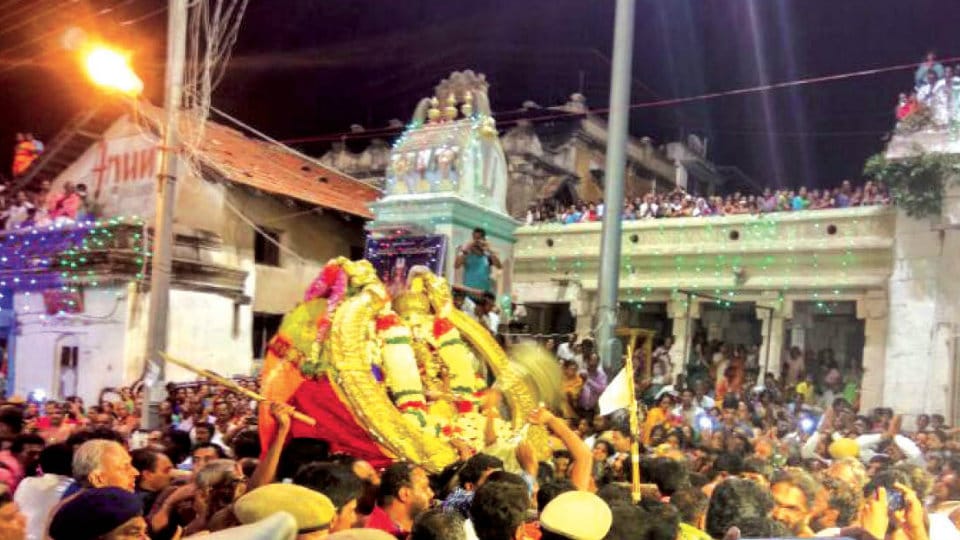 Lakhs of devotees participate in Vyramudi Utsava at Melukote

After procession of Garudadeva and Mahamangalarati, the Vyramudi Utsava commenced at about 9.15 pm yesterday and went on till 3.30 am today. Lakhs of devotees from Karnataka and other States had a darshan of the deity adorned with the precious and attractive Vyramudi believed as the crown of the Lord. The presiding deity was profusely decorated with colourful flowers and people standing on either side of the procession route were seen showering flowers on the idol. The rituals were performed as per Chatur Vedas.

Earlier to that, Vyramudi and Rajamudi crowns were brought from Mandya District Treasury under tight Police Security and taken in a grand procession from Parvathi Mantapa to Sri Chaluvanarayanaswamy Temple by 5 pm. The crowns were examined by officials in the presence of Deputy Commissioner S. Ziyaullah, Additional DC B.R. Poornima, SP C.H. Sudheer  Kumar Reddy and Pandavapura Assistant Commissioner R. Yashoda and was handed over to the Head Priest of the Temple Karagam Narayana Iyengar who got the presiding deity adorned with the precious jewels.

A brief spell of rain did not damper the spirit of the surging devotees. To streamline the crowd, giant screens were installed near the Temple where the Utsava rituals and procession were beamed live.

The Temples, Kalyani and Government offices were elegantly illuminated for the occasion. The District Administrative had made elaborate arrangements for the devotees without any shortcomings. The Police Department had provided adequate security at all strategic places.

READ ALSO  ‘Sanskrit Academy in Melukote to be developed as a Natl. Institution’ 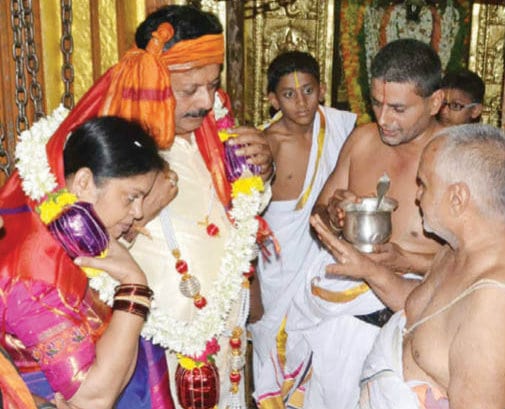 MLA offers puja in Mandya: As part of Vyramudi Utsava, MLA N. Cheluvanarayanaswamy and his wife visited the historic Sri Lakshmijanardhanaswamy Temple in Mandya and offered special puja to the deity and the precious crowns.

Speaking to press persons, the MLA said that after the Vyramudi and Rajamudi crowns were released from the District Treasury, special puja would be performed for the crowns at the Temple in Mandya and then taken to Melukote.

He recalled that 10 years ago he had offered puja to the crowns at the Temple which had brought in prosperity. He added that the Utsava had fallen on Ramanavami day which is   further auspicious.

He expressed confidence that the State would receive good rains and bring cheers to farmers.

Melukote Vyramudi Utsava
‘I know every village because I have served them well’
Mahaveera Jayanti on Apr. 9