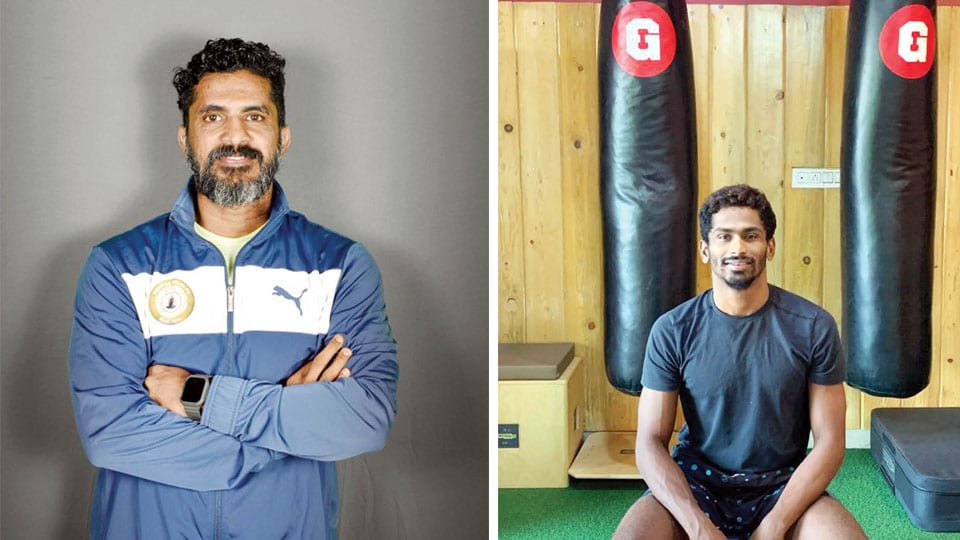 Enables Indian swimmer Sajan Prakash, the first Indian to do so, to make the Olympic ‘A’ cut

Sajan Prakash had gone through a tough phase over the last year or so including a career-threatening injury and he overcame it with sheer hard work and perseverance. In that tough phase, Bengaluru-based Physical Preparation Coach Kulletira Jeeth Devaiah helped Sajan Prakash overcome his difficulties and finally make it to the Olympics. Jeeth has his roots at Napoklu in Kodagu. In a chat with Star of Mysore, Jeeth spoke about his personal goals and achievements, future plans and training Sajan for the biggest stage in international sport.  Excerpts:

Ace swimmer Sajan Prakash is preparing hard for the Tokyo Olympics. It was a case of now or never for the Kerala swimmer who qualified for the world games at the 58th Sette Colli Trophy in Rome with a timing of one minute, 56.38 seconds in the heats, 0.10 seconds quicker than the Olympic Qualifying Time (OQT) to make the direct cut to Olympics. It was also his second straight Olympics, which no other Indian has been able to achieve previously.

Star of Mysore (SOM): As a Physical Preparations Coach, tell us your association with Sajan Prakash and how your training and mentorship helped him.

Jeeth Devaiah: Sajan Prakash was in Railways and I too was. So we had a common ground. He was always a high performer and in 2014 just before the Rio Olympics — where he was the only swimmer to qualify — he had some kind of a niggle and since he knew me well he came to Pro Care Galen and Performance Centre in Bengaluru where I and my physiotherapist Dr. Gautham worked on him. Then he went to Rio and we were connected since then.

SOM: What was the nature of his problem?

Jeeth Devaiah: After Rio, Sajan moved to Thanyapura in Phuket, Thailand, where he was selected by the FINA Academy. During training, he was complaining of neck and shoulder pain. He wanted me to go there and help him out. In swimming, we call  it a ground-based activity where we do a lot of core work, strength work and injury prevention work. I was in Phuket for a couple of months where I brought him to a level of fitness.

We had our plans cut out but unfortunately he had a major injury and which again not many could diagnose. Then he came back to Bengaluru and stayed with me in my house. I took care of him personally for 2 to 3 months where we did a proper rehab session and made him stop swimming temporarily. Later he went to Phuket where he started swimming and the pain recurred.

SOM: Was he able to overcome the pain?

Jeeth Devaiah: Yes, he was pretty hardworking and he could manage both swimming and pain management. We were in touch online on what needs to be done for injury management and things like that. He later moved to Dubai where his coach Pradeep and other physiotherapists took over. We had absolute trust that he would qualify for the Tokyo ‘A’ cut. Also, Sajan is disciplined and has a great sense of self-belief. We are proud of him.

SOM: Do you have any plans to go to Tokyo to see Sajan perform?

Jeeth Devaiah: I really wanted to but I have to go to Dubai first and Dubai is closed now due to COVID and the Indian Olympics team is flying from Dubai. If they were coming to India, then I would have considered it and that’s my bad luck. The virus has played a spoilsport.

SOM: You have worked with Delhi Capitals IPL team. Please throw more light on this.

Jeeth Devaiah: Fitness has always been my forte. Not many people will dare to dream big. I trained at the highest level in cricket, hockey and football. I have been a hockey player myself and I started a job in Railways at the age of 19. In 2004, I forayed into a full-fledged career in physical preparation and started work with Indian Railways for the Ranji Trophy and that year, we won the trophy.

I have not looked back since then and my career graph went up. In 2004, I joined the Indian Cricket Team along with many trainers under Coach Greg Chapell, who was very particular about Indian players experiencing the best in the fitness scenario and the latest advancements. I was one among the four trainers selected to be with the Indian team and trained various teams till 2010. The same year I trained the Delhi Daredevils (now known as Delhi Capitals). And the same year I got an opportunity to train the women’s hockey team before the London Olympics but unfortunately we did not qualify.

SOM: Where did you train football teams?

Jeeth Devaiah: That was Esbjerg Football Club, Denmark, in 2019 and also Esbjerg Academy Team. We won a tournament in Holland and people were shocked to see an Indian running behind the Danish team and it was a good experience in my career to understand how professional they are. Their sessions are all planned months in advance and I learnt to bring back the same to India. In 2014, I went to Australia and worked with the Australia National Rugby Team and Sydney Kings Men’s Basketball.

I also worked with I League team Sudeva Delhi FC last year and we were only Indians and no foreigners as the promoters wanted to give maximum opportunity to Indian players. We fared pretty well considering we trained under a bio-bubble environment (no going outside) for months. Staying in a bio-bubble is draining physically and mentally as everything is restricted and your freedom is completely curtailed.

SOM: How was it working with Women’s Hockey Team?

Jeeth Devaiah: That was in the World Cup and the girls had been to Argentina where they were beaten badly. At that time the team coach too was from Railways and we had a good understanding. They had no concept of fitness. I had to go in and change their mind-set. I had to teach the women that fitness is also important and made them follow strength training guidelines which they are still following for Tokyo Olympics.

There was a misconception that women should not lift more weights and I broke that. In fact, at one place in China where we had been for Asian Champions Trophy and just before the match we did one set of strength training, a warm up and straight ventured into the field to play. That was the confidence the girls had. And after 2010, the girls started understanding that fitness plays a crucial role and it was a good experience for me also.

SOM: How do you plan fitness programming?

Jeeth Devaiah: We plan the fitness programming according to the muscular and skeletal assessment. Our players are keener on skills rather than fitness, I would like for them to focus on both equally. My focus as a preparation coach is that they should not miss any games in terms of injuries so the first priority is strength and condition coaching. If you keep them fit without pain and aches they will be able to play more and give their best.

SOM: What are your goals and ambitions for the future?

Jeeth Devaiah: My goal is to work with an ISL (Indian Super League) team. I have worked with Sudeva Delhi FC and also with the Denmark League. ISL is more challenging and I am already in talks with a couple of teams.