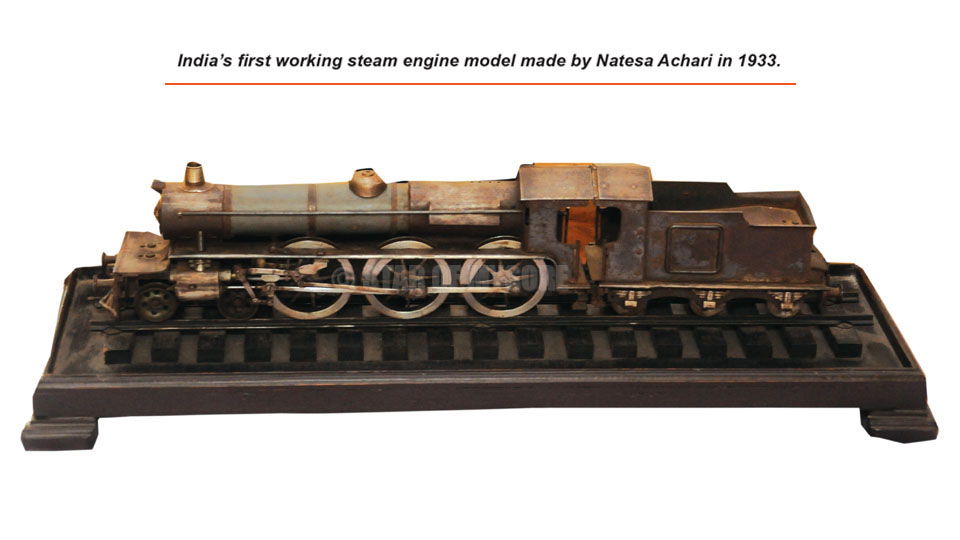 He was just 16 when he made a working model of metal steam engine. That is the age when normally boys think about having a love affair or dream about sports cars or bikes. For Natesa Achari, steam engine was his first love and he was passionate in creating miniature models with absolute perfection and pin-point accuracy. At present, his son M.N. Mohanvel Achari, a resident of Vijayanagar in Mysuru, is continuing his father’s passion of making steam engine models. Notably, all the models made by the father-son duo are in working condition and some of them have been kept as souvenirs by the Railways.

Born to Kuppachari and Govindammal couple, residents of Kollannur in Tamil Nadu, Natesa Achari did not even undergo any training to make a steam engine. He just watched steam engines carrying goods and passengers at Manavoor (Arakonam) Railway Station near his house. He did his basic education at a nearby school and was helping out his father Kuppachari in carpentry work and supported his family. Late Natesa Achari with his engine

Whenever he used to pass Manavoor Railway Station he used to observe the steam engines (Natesa Achari was born in 1917 and India was then ruled by the British) that used to carry passengers and goods. Many a times he used to run to the station before the train arrived just to observe its wheels. Some steam engine drivers allowed this curious teenager to enter the train and see how the engine worked and how it is operated.

After a hard day working as a carpenter, Natesa Achari used to toil in the night relentlessly pursuing his passion — making the components for the steam engine. He made all components with his bare hands and at times used carpentry tools to size and shape the hard-metal raw materials. Though the raw materials were hard to get, he never gave up.

His passion to create a working model surpassed all other activities that are natural for his age. He began the work on 19.2.1932 and even refused to cut his hair till he completed the 28 mm-wide and one-and-a-half feet long engine on 4.3.1933. Once done, he managed to show the model to some Railway authorities then and seeing his dexterity, passion and dedication, authorities gave him a job in the mechanical section of Railway Office at Guntakal in Andhra Pradesh where he served between 20.6.1939 and 31.7.1975. He retired in Mysuru Division as Engine Supervisor. A model (not working) made by him out of silver has been displayed at Velankanni Church in Tamil Nadu. 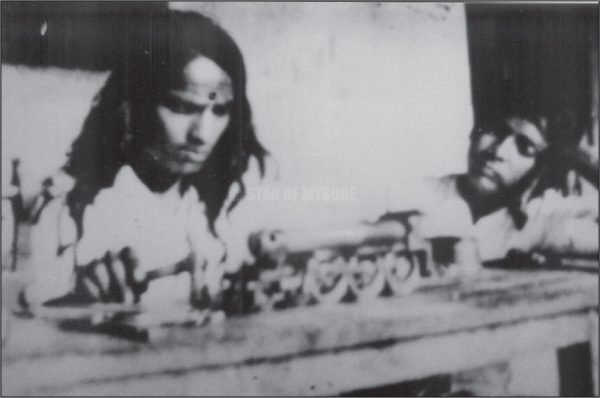 Image Caption: Natesa Achari had refused to cut his hair till he completed works on steam engine model.

Natesa Achari’s model was on display at the ‘First District Agricultural-Industrial Exhibition and Cattle Fair’ conducted at Hindupur on 21.12.1941. The model was awarded First Class Certificate in the exhibition organised by the Hindupur Taluk Agricultural Improvement Committee. He breathed his last on 8.11.2004 at Kalahasthi near Andhra Pradesh not before passing on the legacy to his son M.N. Mohanvel Achari.

Mohanvel was born on 23.12.1954 and fascinated by the models created by his father, he created a steam engine in 1969 when he was 15. He pursued his passion and created three more engines in 1969, 1973 and 1975. One steam engine which is bigger than the other models has been kept at the Mysore Railway Museum. “My father was the first person in India to create a working model of steam engine,” he says demonstrating one of his models by placing the engine boiler on a gas stove to generate steam. Once the steam is generated, it gushes into a cylinder and causes the piston to move first one way and then the other. This in and out movement, called reciprocating, makes the engine move on the tracks.

Mohanvel too entered Railways and was appointed by P.M. Joseph who was working as a Railway Superintendent. He was transferred to Mysuru Division and retired after 30 years of service. “I got the job just because of my interest in steam engines (at that time only steam engines used to run on tracks) and the credit goes completely to my father. I have won the Railway Board Award consecutively for three years in 2008, 2009 and 2010, a rare feat and tough to accomplish,” he says.

Explaining his working models, Mohanvel says that a model requires 160 components and all of them had to be painstakingly assembled once cut and shaped. “A lot of scrap metals, wires, screws, nuts, handles and aluminium sheets have been used. Creating a static model needs no expertise. But creating a working model requires a lot of effort, patience and perseverance. Every part is hand-made, shaped and assembled to get an ultimate working model. A single fault in any part destroys the whole effort and for that matter detection of the fault itself is cumbersome,” he explains.

The miniature working model of steam engines made by Mohanvel Achari.

Residing at his modest house near the Jodi Hunasemara Road in Vijayanagar, Mohanvel has another talent — repairing mechanical watches. He can set right any mechanical watch and has repaired huge antique watches that have ornate wooden shelves and stands and the ones that have impressive ringing bells. “These watches are collectors’ items and are very sensitive. Repairing them needs special care and I am happy that I have repaired many such rare pieces at my clients’ houses in Mysuru,” he says.

Mohanvel wants the model engine-making art to survive. “I will train my next generation so that the tradition continues. It is an asset to the next generation and such working models give them a picture of how the engines used to work,” he says. Usually, people get to see models in museums and they do not get a chance to see working models, Mohanvel adds.

Mohanvel Achari, whose wife has passed away, lives in Mysuru with his younger son M.M. Mohan Keerthi, who is an architect. His elder son M.M. Gowrishankar is an Assistant Manager at L&T, Mumbai.

B.C. Thimmaiah Steam Engine
A good 36 years ago with R. Gundu Rao………….
His love for strays is unconditional