Home » Feature Articles » His love for strays is unconditional 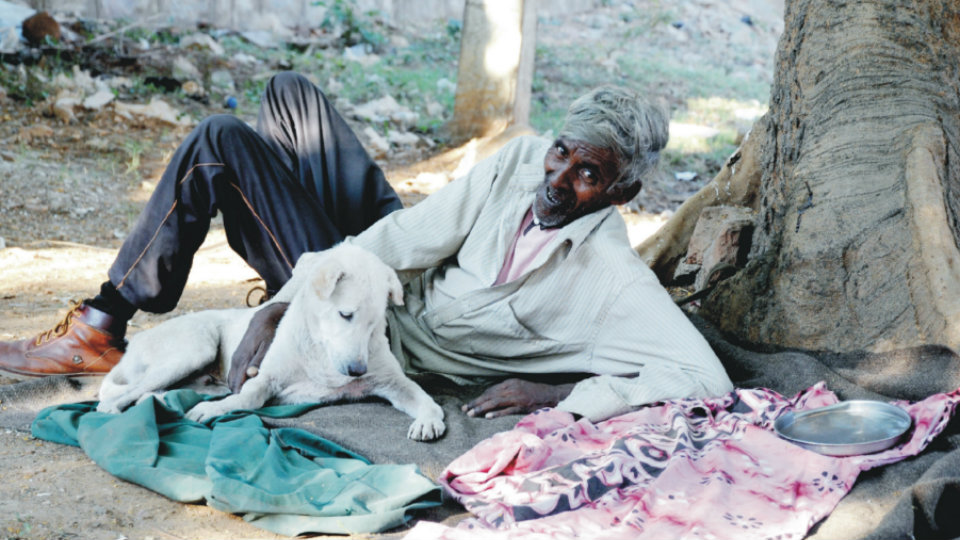 His love for strays is unconditional

While millions of stray dogs roam our country’s streets and at a time when authorities deal with this overpopulation through cruel means such as culling and poisoning, here is a man in Namma Mysuru with meagre earnings taking care of a pack of street dogs. So much so that he feeds his dogs on priority before he himself eats something. And he has been doing this since the past 10 years and without complaining even a single day.

Meet the ‘dogman’ Gopal, who lives on a footpath near Akashavani Circle close to Vikram Hospital at Yadavagiri, who could well be a role model to those who display humanity just to gain some publicity or some “likes” and “comments” on social media. Rain, cold or shine, Gopal is there with his dogs always.

Though having meagre means to sustain his and his dogs’ needs, Gopal never begs anyone for money. He is a familiar figure in the area and there are regulars who hand over some coins to him with which he buys biscuits to feed his pets. He eats at a nearby canteen and ensures that he gives his dogs to eat first. His difficult days are when the canteen is closed and when he is forced to feed his dogs and himself with bread.

Gopal takes care of five dogs that are an integral part of his life. He prepares a small bed for the dogs so that they can sleep warm in winter and also covers them with a torn blanket. At times he is seen sleeping hugging a dog. He is so attached to the dogs that he can easily identify when they are hungry through their barking sound and groans.

He also feeds some cats and squirrels who eat from his hands without any fear.  Gopal’s favourite dog is Kariya who has been with him since it was a puppy. He loves to give Kariya a warm hug and the dog responds by licking his face and arms.

This does not mean that Gopal does not like his other pets. For him love is unconditional and he makes it a point to feed all of them before he eats. There are times when Gopal had stayed hungry by just drinking water.

Gopal starts his day cleaning the road between Akashavani Circle till the Vikram Hospital. He then dumps the waste inside the Mysuru City Corporation’s designated dustbins. As he is a familiar face in the locality, some people offer him money with which he feeds his dogs. A man with a lot of self-respect, Gopal uses this money to buy biscuits. “I can somehow survive. What about these animals,” he says.

Gopal is 73 and originally hails from Aruvangadu in Tamil Nadu. “I was brought to Mysuru when I was a small boy and my family owned a couple of shops here,” he reveals. When asked why he does not manage the shops anymore, he says with a wry smile: “Our lives and fortunes are limited and they depend on God’s will. The Almighty has asked me to be here and so I am here.”

Ask him about his family, Gopal is at a loss of words and after a moment’s silence, he says: “One cannot violate God’s will and we are bound to follow his diktats.”

“Dogs are my children and I will be happy at least if some people are willing to buy some biscuits and feed my children,” he says, heaving a sigh of relief.

As he is getting aged, only one thing worries Gopal every day. Who will take care of his pets if something happens to him?