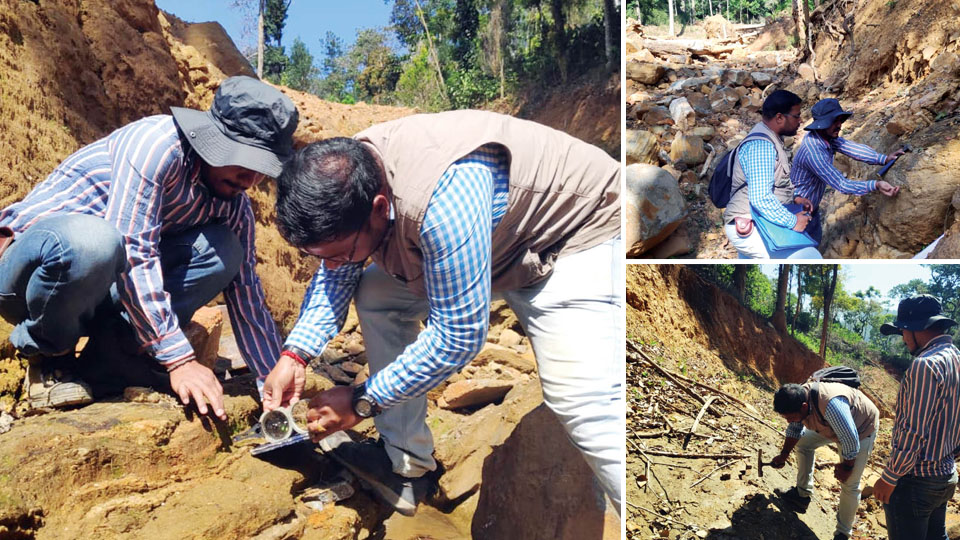 A team from Geological Survey of India (GSI), a government body, has begun studying the exact reason for floods and landslides that ravaged Kodagu in August 2018. The team began the study this morning and is expected to submit its report in June this year.

The team arrived in Kodagu based on the request from Karnataka Chief Secretary to conduct a detailed and in-depth study of the cause of the massive landslides and floods that destroyed many villages in Madikeri and Somwarpet Taluks last year.

It may be recalled here that immediately after the landslides, a GSI team prepared a comprehensive report after visiting the devastation-hit parts of Kodagu from Aug. 27 to Sept. 1, last year. Now, a second team has begun in-depth study of land pattern as the first GSI team only conducted a preliminary survey.

This four-member team is headed by Sunandan Basu and comprises members Amar Jyothi, Aijas Ahmed Zameer Ahmed Shah. The team is entrusted with the responsibility of assessment of , causes, the future risk and vulnerability at the landslide sites and also to suggest remedial measures — both immediate and long term.

The team will map the areas in detail and conduct a geological control study. It will determine the precise cause of landslides, identify strong and weak zones, check streams, open rocks, stability and instability factors.

The study team has divided the landslide-and-flood-ravaged areas in Madikeri and Somwarpet Taluks into four blocks and will study them for two fiscal years — 2018-2019 and 2019-2020. The first two blocks comprises Madikeri South, Makkandur, Kaloor, Yemmethaalu, Monnangeri, Second Monnangeri, Meghathalu, Thantipaala, Makkandur and adjoining areas. The other two blocks will be identified and listed later after the first two blocks are studied and reported.

The GSI team will conduct the field study for 65 days and after laboratory studies and analysis, it will submit a report to the Chief Secretary and the Kodagu District Administration by June this year. The team will identify the potential danger zones where floods and landslides could occur and suggest how roads, drainages, houses have to be built in landslide-prone areas and will suggest remedial measures. It will recommend the methods of constructing retaining walls, pattern to be followed while planting trees and while building water storage facilities.

In the initial study today, the GSI team found six land breaks at Mandalapatti, one of the most sought after tourist locations in Kodagu district that is about 15 kilometres from Madikeri. The team found deep breaks in the land in stages and a detailed analysis by the experts is awaited on the impact of such land breaks.

GSI sources told Star of Mysore that in 2013, experts had declared Monnangeri as not safe for human habitation as the area is prone to massive landslides. This report, was, however ignored and there was continuous exploitation of land in the form of land conversions.

In its preliminary report out of the study conducted from Aug. 27 to Sept. 1, last year, the GSI team had  mentioned that modification of land for construction of infrastructure like houses, hotels, home stays etc., large-scale slope modification for plantation (especially coffee) is one of the reasons for the landslides and flooding.

“The main reason for devastation is rainfall and the slope modification by human interference. There are no guidelines or land-use regulations to monitor the lands in the area. The State government along with State Disaster Management Authority should henceforth frame strict guidelines/regulations for land-use in hilly terrains of Western Ghats in general and Kodagu district in particular,” the report had said.

Armed with photographic evidence of extensive exploitation in the name of development, the Geologists showed how slopes have been modified extensively for plantations and construction of houses and in the process how these constructions blocked the natural drainage. This has led to landslides and the runoff has come down along the drainage course to damage the plantation and houses, the GSI team had opined.