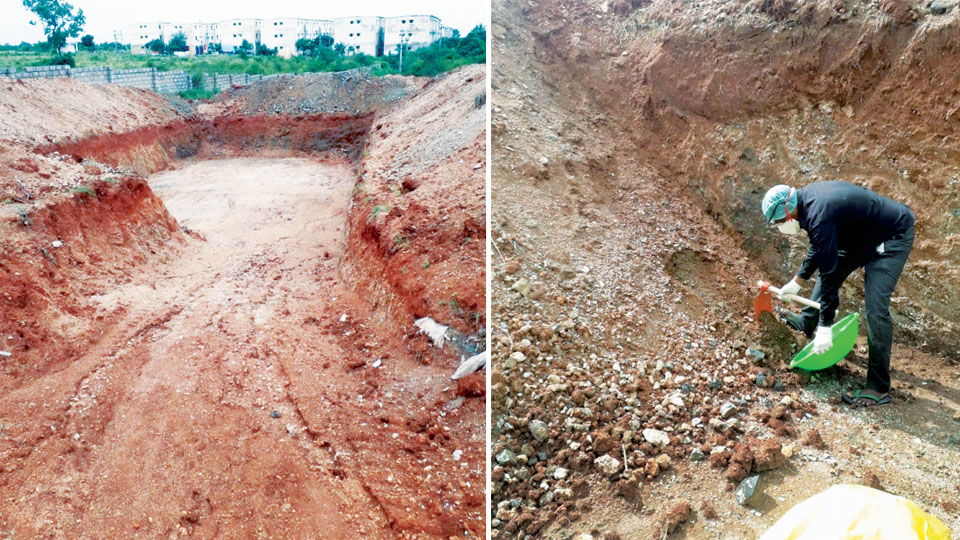 Mysore/Mysuru: The COVID Care Centre (CCC) established at the Academic Bhavan of Karnataka State Open University (KSOU) at Mandakalli, which has 526 in-patients as of today, has now got a huge compost pit to convert food and other wet waste into manure, which would be supplied to the Horticulture Department soon. Thanks to the initiative taken by Lt. Col. Dr. S.U. Ashok, a Probationary KAS Officer, who is also the Nodal Officer of the KSOU CCC.

Dr. Ashok, speaking to SOM this morning, said that there was a problem in disposing food and other wet waste generated at the CCC as the Gram Panchayat and MCC refused to transport the waste citing various reasons. As the waste began to accumulate, there was an urgent need to dispose it of scientifically and an idea of turning  waste into compost was conceived. A pit measuring 50 ft X 40 ft and eight feet deep was dug up at a distance of 800 ft from the main building, he said.

Pointing out that the process of converting food and other wet waste began yesterday (Aug. 17), Dr. Ashok said that steps have been taken to prevent stench from emanating from the compost pit. After plastic waste is removed, the food and other wet waste are dumped into the pit, bleaching powder is sprinkled and coco peat (made out of coconut husk) is added along with limestone and leaves procured from the Forest Department.

Dr. Ashok said that as there is no vehicle (garbage truck) to transport the waste, a request was made for the same to the district administration which has assured of providing a garbage truck to transport waste to the compost pit.

Meanwhile, the district administration considering the well kept CCC at the Academic Bhavan of Karnataka State Open University in Mandakalli has now given Dr. Ashok an additional responsibility of solving various problems at the COVID Hospital on KRS Road in city.

It may be recalled that the COVID Care Centre at the Academic Bhavan of KSOU in Mandakalli began functioning from July 15 and 1,100 patients have been discharged so far. The facility has 607 beds with 526 patients undergoing treatment at present.

There are 51 rooms and the Ground Floor has been converted into a parking space and also a space for doctors, nurses and care facility administration staff.

Each room has WiFi connectivity, a TV for entertainment and there are recreational facilities like chess, tennis and other indoor games to infuse positive energy among patients.

Yoga is also taught at the CCC by Dr. Madhusudhan, a Medical Officer at a Primary Health Centre (PHC), who has over eight years experience in teaching Yoga. Also, Music Therapy is conducted and nearly 1,750 patients have undergone the therapy.

Dr. Ashok, who has innate knowledge and practical experience of setting up such medical care centre in war zones and other areas of conflict where injured soldiers are treated, coordinated with Nirmithi Kendra Director Manjunath to modify the Academic Bhavan of KSOU into a COVID Care Centre.