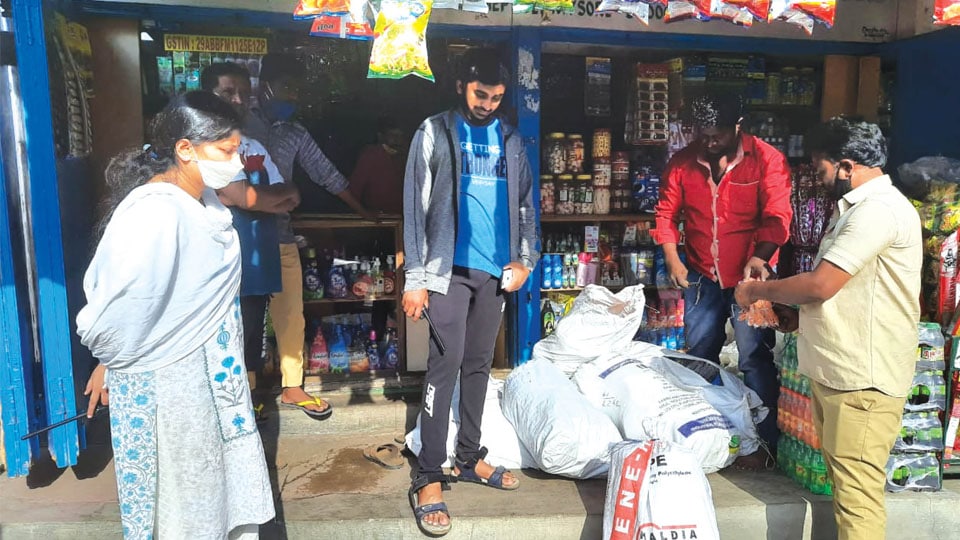 Mysore/Mysuru: After multiple attempts by the State Government, the Mysuru District Administration and the Mysuru City Corporation (MCC) to ban single-use plastic, now it is the turn of the Karnataka State Pollution Control Board (KSPCB) to enforce a blanket ban on all kinds of single-use plastic products with effect from July 1 in Mysuru city.

A communiqué from the KSPCB said that the ban will be imposed on single-use plastic items which are low in utility but have a high potential for littering. The banned items include plastic sticks, earbuds with plastic sticks, plastic flags, candy sticks, ice-cream sticks, thermocol or polystyrene decoration, balloons with plastic sticks, cutlery items like cups, glasses, cups, forks, spoons, straws, trays, knives and stirrers for tea or coffee.

Even wrapping or packing plastic materials like sweet boxes, invitation cards and cigarette packets and plastic or PVC banners which are less than 100 microns will be banned.

Notably, last year, the Union Environment Ministry notified the Plastic Waste Management Amendment Rules, 2021, that make it mandatory for the thickness of plastic carry bags to be increased to 120 microns by the end of 2022.

The communication said that the July 1 ban also extends to the sale, stocking, distribution and export of such plastic products in all shops and shopping malls. Also, the sale of these products near schools, colleges, educational institutions and hospitals has been prohibited.

Those in possession of the mentioned single-use plastic have to audit the available plastic in their godowns and storage houses. Also, factories producing such materials must have an inventory of the plastic produced and those in the pipeline too. The ban will also be extended to cancelling the licence of commercial establishments that either sell or use these plastic products.

The KSPCB will collect a penalty of Rs. 5,000 per tonne of plastic for violations during surprise raids by local civic officials as per the guidelines issued by the Central Pollution Control Board.

The raids will be conducted in all the zones and plastic will be confiscated. “We will first raid places where banned plastic is being manufactured. Stringent action will also be taken against bulk distributors who continue to indulge in the distribution of single-use plastic. By doing so, we want to ensure that plastic below 100 microns is not available in retail shops,” a KSPCB official said.

Except for some periodic raids on warehouses and factories that produce and store single-use plastic, the ban on plastic imposed by the State Government, the District Administration and the MCC has largely been ineffective. It may be recalled here that in 2016, the State Government issued a gazette notification banning the sale and use of several plastic products in the State. Soon, the MCC announced that the manufacture, sale and use of plastic products mentioned in the notification stand prohibited in the city as well. Rules were to be enforced to comply with the Plastic Waste Management Rules 2016. However, the rules have remained on paper with name-sake implementation.

Last year too, Mysuru District Administration enforced a ban on single-use plastic items from Apr. 5. Single-use plastic materials such as polythene/ plastic/ polypropylene carry bags, polythene plastic cups, polythene plastic plates and plastic sheet pouches used to wrap cooked food were banned. The District Administration had given manufacturers, distributors and consumers time to dispose of their existing stock and come up with alternatives to plastic usage. Also, many raids were conducted on plastic storehouses in many marketplaces including Shivarampet.

As an alternative to plastic bags, over 16 lakh cloth bags were distributed to 7,34,905 houses. But in the later developments, a controversy erupted where the cloth bag distribution itself was questioned by politicians who alleged corruption though officers have denied the same.