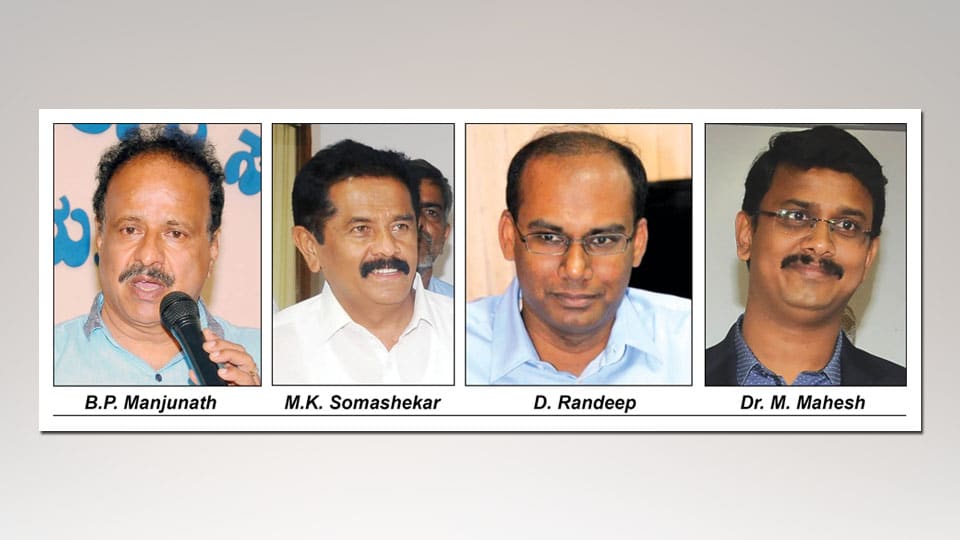 Voice of the Victims

When will the tormented residents of these layouts see the humane face of this Siddharamaiah Government?

Mysuru: Fed up and frustrated by the inordinate delay in the long-pending and vexed issue of properties coming under Kurubarahalli Survey No. 4 and other layouts namely Alanahalli, K.C. Nagar and Income Tax Layouts under Alanahalli Survey No. 41, the residents are once again taking the protest route to get their grievances resolved.

On March 4 this year, Krishnaraja MLA M.K. Somashekar had assured the residents that all their problems regarding ownership and the issue of ‘khatas’ will be solved within three months. “This is July and the problems remain in as-is-where-is condition. Nothing has changed and we have no alternative but to protest,” said B.P. Manjunath, BJP National Council Member and Convener, Survey No. 4 Hitharakshana Samithi.

Addressing a press conference at Pathrakarthara Bhavan here this morning, he said that a protest will be organised in front of Mysuru Urban Development Authority (MUDA) on July 12. He said that a ‘Public Grievance Meeting’ was held on March 4 this year to hear the problems of residents of Kurubarahalli, J.C. Nagar, K.C. Nagar and Siddarthanagar coming under Krishnaraja Constituency. The meeting was held at the CITB Choultry at Siddarthanagar and MLA Somashekar had assured of a solution within three months.

“At the meeting, Deputy Commissioner D. Randeep and MUDA Commissioner Dr. M. Mahesh had said that a suitable report will be sent to the State government highlighting the grievances of the people who have purchased sites from MUDA and how the land was classified as ‘B-Kharab’. Despite the presence of senior officials and the subsequent assurances, nothing has moved so far,” Manjunath alleged.

“These layouts were formed by the Government’s own department through City Improvement Trust Board (CITB) (now MUDA) and transferred to the MCC after collecting the cost of the house sites and under the sale deed as per law. There were no problems since they were formed nearly 25 years ago and suddenly two years back the entire land has been illogically classified as ‘B Kharab’ (government land) by the government’s own officers who are unaware of the background and history of these MUDA-formed layouts,” Manjunath said.

Alleging that the issue was intentionally not solved by the Congress government in the State though there are over 30,000 residents in the said survey numbers, he said, “If the issue is not solved, MLA Somashekar from Krishnaraja and Minister Tanveer Sait who represents the Narasimharaja constituency must resign. I call upon them to join the protest on July 12 and wake up the authorities,” he said.

Manjunath said that neither the District Administration nor the MUDA is bothered about the plight of residents. “The unscientific classification as ‘B Kharab’ has resulted in non-issue of ‘khatas’, title deeds, building plans, completion certificates, etc. thus  legally disabling them from selling their properties or to raise loans to meet their commitments,” he said.

The Samithi will take a call on the possibilities of filing criminal cases against erring officers and also decide if the residents should pay taxes or not. “Several agitations including hunger strike in front of MUDA and Vidhana Soudha Chalo have been planned,” he said.