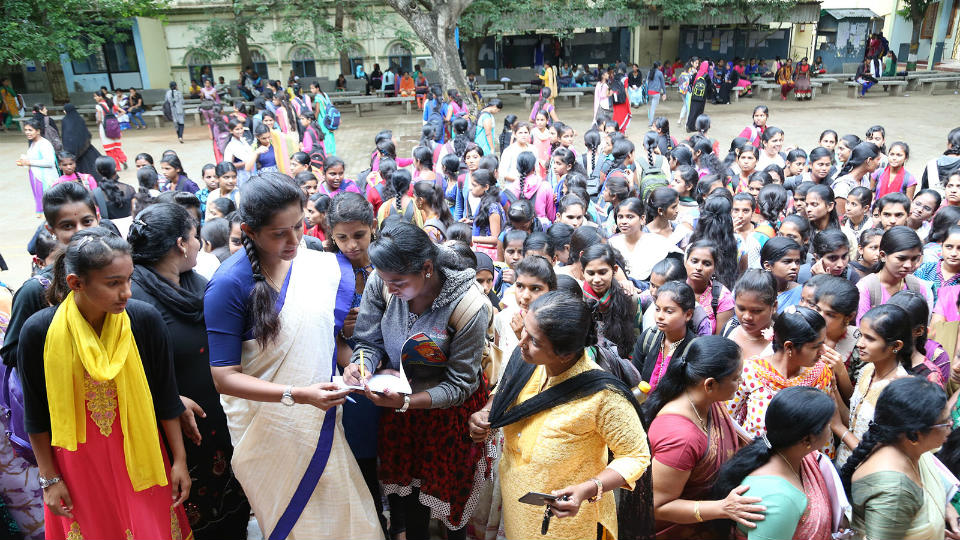 Mysuru: While a campaign asking for exemption of tax on sanitary napkins has been gaining momentum nationwide, Mysuru witnessed a mass signature campaign at Maharanis College this morning against the government move. The 12 percent Goods and Services Tax (GST) on sanitary pads has become a point of contention with women activists, NGOs and citizens accusing the government of neglecting the needs of women.

Hundreds of students assembled inside the Maharanis College campus and began the signature campaign. Former Zilla Panchayat President Dr. Pushpa B. Amarnath led the campaign. Addressing the students, she said that it was unfortunate that the government had taxed 12 percent on sanitary napkins at a time when there is an increased stress on women’s health and the education of girl child.

“The Government has reduced the price of luxury cars by almost Rs. 3 lakh and is distributing condoms free of cost. Sadly, the most essential thing for women has been heavily taxed,” she said. Only 12 percent of women use sanitary pads and 88 percent of them follow crude methods of using clothes, ash, newspapers and even leaves during their menstrual cycle. “Through taxes, the government is discouraging women from hygienic practices,” she charged.

Dubbing the decision to tax sanitary napkins as unfair, Pushpa Amarnath said she cannot understand why no mind was applied with regard to issues surrounding the use of napkins. “Taxing a biological process like menstruation is like taking away the fundamental right of women,” she says.

“This is not a luxury item. We are women and, we go through this every month, and not out of choice. Sanitary napkins should cost very little and it should be tax-free,” said a student. “Five people live in my house and there are four women. My father earns about Rs. 10,000 per month. With one breadwinner, there are a lot of problems. Even a raise of Rs. 20 (in the price of sanitary pads) will affect us,” said another student.

READ ALSO  GST e-Invoice: Who are all covered?

“We all come to Maharanis College from low-income families. If they keep increasing the rate, we won’t be able to afford it. What will we do then?” questioned a student.

The signature campaign was launched first in Hunsur where over 5,000 signatures were gathered. At Maharani’s College, the first student to affix her signature was Shashikala a visually-challenged Third BA student. The campaign continued at Yuvaraja College too.

On her part, Pushpa Amarnath has tweeted Prime Minister Narendra Modi and Finance Minister Arun Jaitley requesting them to take steps to withdraw the tax taking women’s health into consideration.