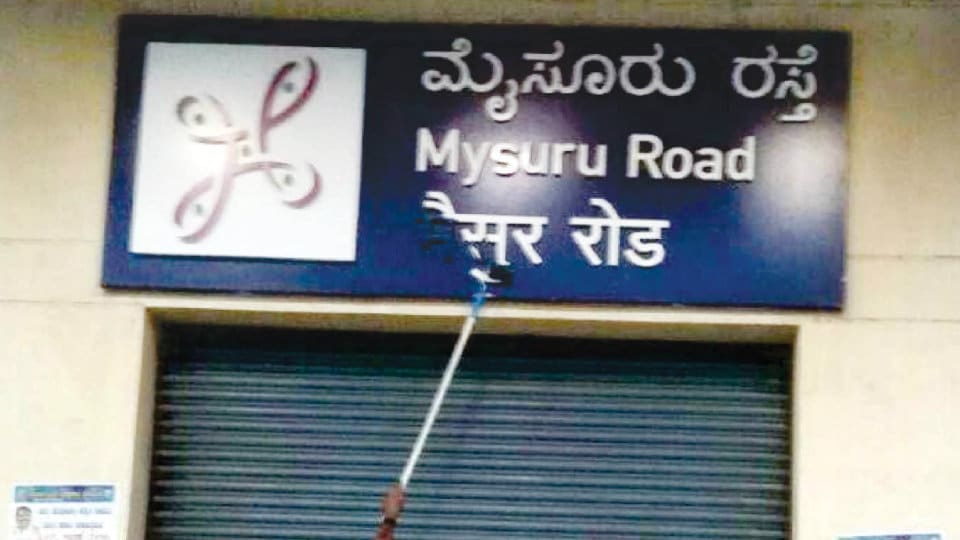 By Dr. B. Shakira Jabeen

Language used in display boards of Railway Stations, billboards, advertisement hoardings and banners has evoked passions in Karnataka and other States. Sometimes, these display boards are defaced or brought down.

The anger at not using the right language is proxy for anger towards Governments. In the absence of clear-cut guidelines, it becomes difficult to discuss the issue. There is no Government agency that takes action against these displays. It is always a group of local residents who object. Not many know if there is a rule and, if so, what it says.

Government of Karnataka has a language policy. All nameplates, boards and hoardings will have to be in Kannada. The order dated 15.3.2002 makes use of Kannada compulsory in all banners used in Departments, Universities and educational institutions.

If the event is of national-level or international-level, then Hindi or English is permitted. In multilingual ads and hoardings, Kannada should be used first followed by English and Hindi.

How people follow this rule is interesting. The rule is applied to the written form of language — the script used in writing. One could use any language he wants as long as the script used is Kannada. Shops have English and Hindi names but they are written in Kannada. For example, names like Imperial, Quorum, Bata, Flex, Woodlands, Nike etc. are not Kannada words. But these names are written using the Kannada (Brahmi) script.

The rule has led to English names  being written in Kannada, Kannada words written in Roman script or both Brahmi and Roman in hoardings. The rule does not expect translation of the English words. Beyond this, the choice of language in display boards and hoardings opens up multiple ways of looking at it.

Have economic factors triggered a militant approach to language? Majority of business houses are owned by people from outside Karnataka. These people have been residing in Karnataka prior to formation of linguistic State is another matter. IT-BT employees have attracted huge number of non-Kannada speakers.

Temperate weather, general tolerance towards other language speakers and availability of good educational centres has been an attraction to settlers here. Prior to the formation of Kannada linguistic State, commerce was handled by multiple non-Kannada speaking communities. Parochial attitude of non-Kannada speakers, a strong language attitude practiced by neighbouring States has kindled a desire to safeguard Kannada.

Emerging economic disparity is a reason for disgruntlement. Local Kannada community feels left out of the economic boom that some cities have witnessed. The demand for employment for Kannada-speaking community in private sector points at economics of language.

Language-based agitations are an attempt to reclaim local identity and city space. They are also timed to reap political mileage. There has been backlash at the visual presentation of three languages in Karnataka — English, Tamil and Hindi. English seems to have become visually less offensive of late as it is found to be economically profitable.

Assertion of Kannada identity against Tamil surfaces during release of some films, Cauvery water dispute etc.  Hindi, unlike English, has invaded the small-scale business space. And successive Union Governments have overtly and covertly favoured the use of Hindi in all domains. Periodic declarations challenge the identity, independent existence and richness of regional languages. These statements go against the Constitutional provisions made for Regional languages.

Nations can exist without national language. One single language for the whole nation is a Western / European idea. There is nothing more ‘videshi’ than the idea of one single language for the whole country. Languages don’t stand in isolation of culture. They, in fact, are the markers of culture. Imposition of one language is resisted on the grounds that it fosters linguistic hegemony, creates uneven field for competition and encourages monolingual mindset.

India has been a multilingual and multicultural country from ancient times. So, the elusive thread that binds India together is the spirit of linguistic tolerance. Tampering with it may affect the very fabric of Indian culture.

Both Union Governments and the State Governments have shown ambivalence in their attitude towards language. While State Governments tactically support the groups who agitate, Union Governments beat a guarded retreat after making an effort to push Hindi as the only administrative language. This is the pattern irrespective of the party that rules. The attitude towards language is not policy-based. However, one cannot forget that most serious language agitations in the South have taken place when Congress was in power at the Centre. All groups need to accept that it’s impossible to use one single language in all domains in India.

Every time a controversy arises due to language used in public domain or a statement made by a politician, it is an opportunity for the Government to address the issue, formulate rules and implement them. People’s linguistic rights will have to be honoured. Article 347 states, “If a substantial proportion of population of a State desires that their language be recognised, the President may direct the State to recognise that language too as an official language.”

Constitution also allows for one or more languages to be the official language. Constitutional guarantees for languages under the Eighth Schedule will have to be adhered to. Three-language formula is not only a recommendation but a framework for national integration.  A clear cut language policy will have to be framed. Equating language policy with medium of instruction is a naïve approach to a sensitive issue. Learning one of the National administrative languages and the administrative language of the State would empower the youth. The freedom and tolerance that the States expect from the Centre has to be extended to smaller languages. Two things have to be done — educate Kannada-speaking community about the rich tradition of linguistic inclusivity and sensitise settlers about this tradition and they, in turn, should take this message to the National capital. Linguistic rights come with linguistic duties.

[The writer’s research area is ‘Language Policy of Government of Karnataka.’]