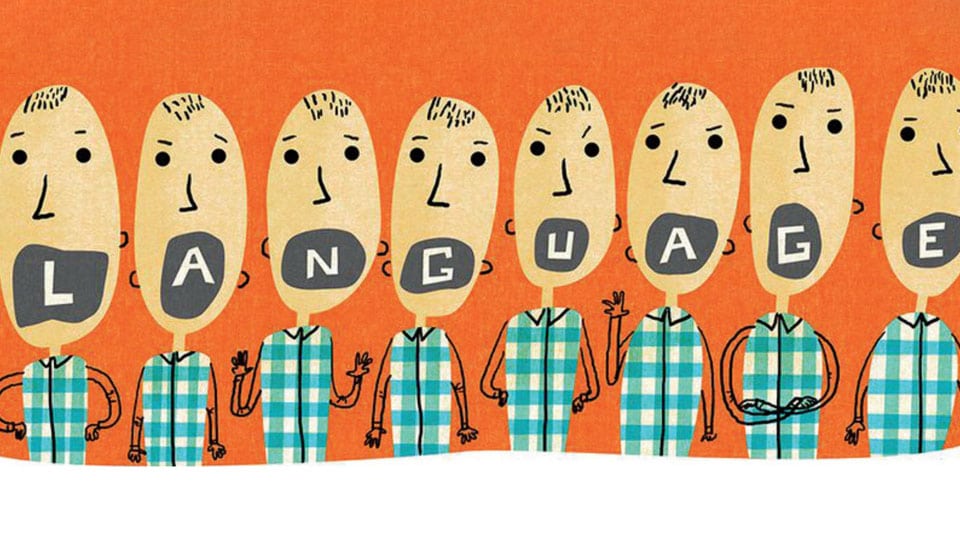 Last week I received a video clip on WhatsApp showing our recently elected MLA from Chamundeshwari Constituency G.T. Devegowda (GTD) replying to some questions posed by an English news channel. Though the video clip was circulated as if it were just an interview, the real intention was to mock the MLA’s English. Similarly, our ex-Mayor M.J. Ravikumar too was mocked for his bad English.

If these leaders have to be mocked, they must be mocked for not having the sense to speak their mother-tongue, Kannada. This is a problem with most Karnataka leaders. Be it B.S. Yeddyurappa, H.D. Kumaraswamy, D.K. Shivakumar or Siddharamaiah, they speak bad and broken English instead of replying in Kannada, the language they are most articulate in.

English today has created a language-based class system in India like Sanskrit did in times of yore. Good English speakers are self-proclaimed “elites.” To tweak a dialogue from the movie Namak Halaal, most of the English speakers in India today think that if they talk English, walk English and laugh English … they are British when actually they are just snobbish.

So obsessed are we to show off our “English” that one Judge in Himachal Pradesh gave a judgement that left even the Supreme Court fuming. Here is an excerpt of the judgement, see if you can understand it:

The Supreme Court reportedly said “one cannot understand this” and put it aside. It may have requested a simpler version.

Language is meant to effectively communicate, not show off. This reminds me of a joke.  Shashi Tharoor, the MP more popular for his English than policies, once met a beautiful woman in Delhi and said, “Oh! My lady please bestow me with the delectation of your occurrence in my mansion.”

READ ALSO  The Relevance of IKEA and its Mysuru Connection

The confused Delhi lady said, “Kya?! What do you mean Sirji?”

Sensing she did not understand, he got straight to the point in a language she got, he said, “Aao kabhi haveli par” (Come home sometime).

In India, English is the language that symbolises aspiration, intelligence, modernity and prosperity to millions. It is the language that has made us employable and competitive in the global market as it is the global business language, according to “Harvard Business Review” report. But while it is a great asset to know English, it is important to know your regional language too.

Why are we ashamed to speak in our native tongue? After all, speaking in one’s language does not make one less intelligent, nor does speaking in English make one sophisticated.

Our Prime Minister speaks in Hindi all the time. He speaks English only when abroad as a gesture of outreach and respect to the nation he is addressing.

The same for most world leaders from Angela Merkel of Germany to Putin of Russia. They know English, but they use it only as a tool of diplomacy. Otherwise, it’s always their national language.

Now, after watching the video clip I wondered how many people who trolled and mocked the MLA can speak their mother-tongue without adulterating it with a generous sprinkling of English?  Even Radio Jockeys on exclusively Kannada language radio stations cannot speak Kannada without mixing English!

The same goes for  most urban regional language speakers. It is because of this sprinkling of English words that today neither can we speak good English nor speak our mother-tongue proficiently. It’s a shame.

Yes, English no doubt is the language of prosperity. In fact, a 2014 report from the Centre for Research and Debates in Development Policy states that men in India who spoke fluent English earned 34 percent higher wages.

Remember, when a Cricket Board member mocked Kapil Dev for not speaking in English?  A hurt Kapil later said, “I was picked to play for India because of my cricketing credentials, not for my  English speaking skills which is not my mother-tongue.” He later learnt English realising there is money in English commentary and public-speaking. Kapil then went on to become the Brand Ambassador for Rapidex, an English Speaking Course.

English is our business language, but in Karnataka Kannada is the language of the government. If you want to effectively communicate with the Police, local government or even in shops, then Kannada is King.  So it’s better if non-Kannada speakers, looking to settle down in Karnataka, learnt the language.

More importantly many schools in Mysuru are not offering Kannada as a third language, instead they offer French and Hindi! Also the addition of old-Kannada (Halegannada) in the syllabus is scaring both parents and children away from Kannada.

For now, our leaders need not speak in English. They need to speak the language of the masses. Even the immensely articulate Shashi Tharoor speaks fluent Malayalam when he visits his Constituency in Kerala.

Yes, English may have economic value but our mother-tongue has an unmatched emotional and communicative value.