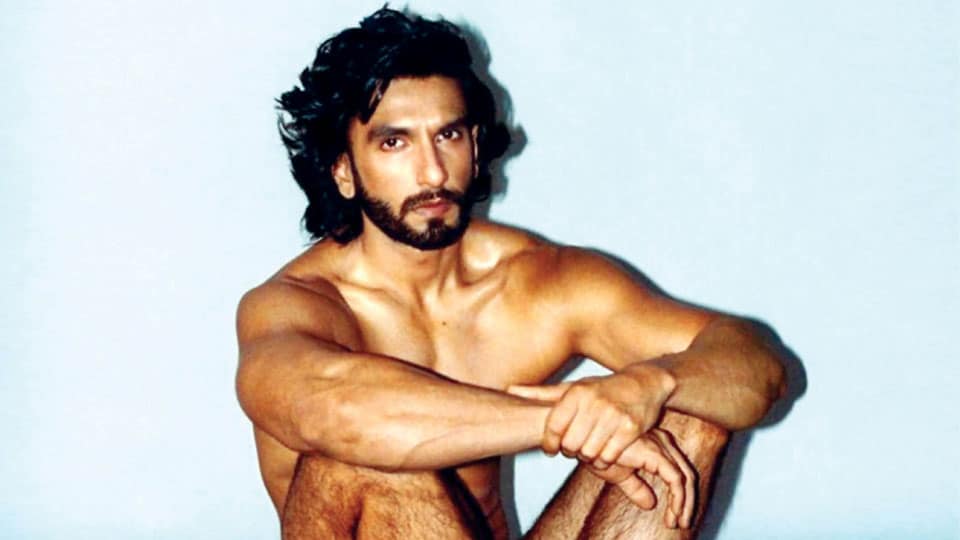 Ranveer Singh is interesting and even refreshing if you observe him through a discerning progressive lens. His lack of respect for what our society considers ‘normal’ is refreshing.

Be it his clothes — he wears skirts and shirts with more sequence than his wife. Or be it his complete disregard for cultivating and maintaining the stereotypical image of an Indian hero — a macho man. Ranveer, in his own way, pushes the boundaries of what the typical perception of an Indian male should be, and now it seems he pushed it down too far as he slid out of his pants for a nude photoshoot.

The Mumbai Police registered an FIR against Ranveer Singh on Tuesday for sharing photographs of his nude photoshoot for the New York-based ‘Paper’ Magazine.

I saw the pics; they were sensual, tasteful, and even somewhat artsy. The photos don’t feel dirty or ‘porny’. They are just pics of a beautiful man. At least that’s all I saw. But it seems that’s not what the complainants saw. They saw more!

According to the report in Indian Express, one of the complainants says that when he zoomed in on one of Ranveer Singh’s photographs, he realised that the actor’s private parts were visible!

First, I have to ask, why did one of the complainants zoom into another man’s Central Business District (CBD)? Now, thanks to this complaint, I got curious and found myself zooming into Ranveer’s CBD.

As I started zooming in, it looked like a very dark and shady place. I was scared and alert lest some ‘nuts’ who ‘hang’ around such places suddenly pop up and scare me like they                  did the complainants.

The question is, should the Police and Courts be wasting time on such cases? As the famous author of Carpet Wars, Christopher Kremmer, put it “In India, frivolous litigation seems to be a national sport.”

Interestingly, the Police have booked cases against Ranveer using laws created in 1925 by the British. But the British themselves don’t have these laws anymore! Then why are we keeping them?

Ancient Indian culture accepted, appreciated and even celebrated sex and nudity as natural and beautiful. They didn’t call it a sin like most Western religions did and still do.

That said, maybe it’s time Indian women got to see some male nudity. We are sure the modern Indian women’s ‘modesty’ is not so fragile that a Ranveer nude photoshoot could outrage it. And here’s news for people who are worried about modesty…

This being the case, we doubt Ranveer’s butt curve will outrage young Indian women. If anything, they must be outraged that Ranveer did not have the guts to show more.

We Indians are prudes and hypocrites, especially the Indian middle class and upper middle class. These two sections of our society are most worried about ‘what people will think’, and because of this, they lead hypocritical and unfulfilled lives—busy judging and moralising instead of minding their own business and living.

Conversely, the super-rich and the poor don’t care what others think; they live as they choose fit and do what makes them happy.

Meanwhile, the Indian middle class and upper middle class are stuck in the British prudishness era and keep harping about our ‘glorious past’ and ‘culture’ while conveniently ignoring the fact that sex, erotica, sensuousness and nudity were also part of our glorious past and culture.

Our past was glorious indeed, with our knowledge of medicine, mathematics, astronomy, linguistics, textile, metallurgy etc. Along with these, we were also excellent with regard to how we viewed and celebrated sex, erotica and nudity.

Maybe this ‘openness’ made our ancestors free thinkers and dared to have a scientific bent of mind. No thinker or scientist in ancient India was ever driven to death for suggesting radical ideas like Galileo in the West or, even more recently, Alan Turing was. Yes, we were a society open to ideas and accepting of different aspects of life. Look where we are today.

It’s time to shed our British-induced prudishness even in matters of sex and live a little like our ancestors, with a sense of sensualness.

While we ‘Make in India,’ we must also stop ‘Fake in India.’ Hypocrisy and lack of humour can stifle a nation. And it is.