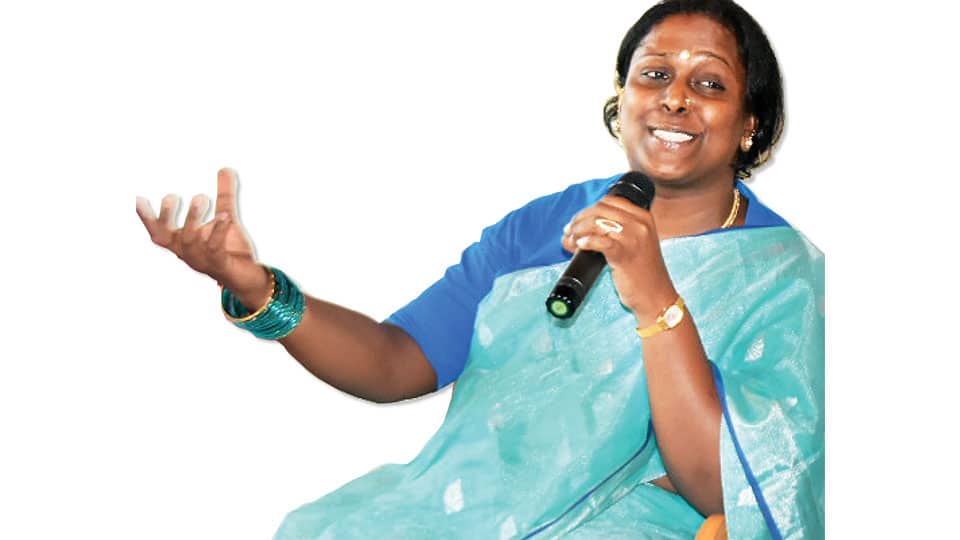 From being a sex worker to being at the forefront of decriminalising homosexuality and penning her autobiography, Dr. Akkai Padmashali’s journey has been far from ordinary. The first transgender in the country to get a driving licence mentioning her gender as ‘female’, Akkai was invited to meet former US President Barack Obama when he visited India in 2017.

Star of Mysore caught up with her when she was in city recently to attend the Mysuru Literature Festival as a panellist in the discussion ‘Not an outsider — Just different, like each one is.’ Excerpts:

Star of Mysore (SOM): Even a few years ago, you were scorned and people were scared to even speak or touch you. Today the same people are scrambling for a photo op with you. How has the journey been?

Akkai Padmashali: (laughs heartily) That’s an interesting question. This is what is called a social change, right? Perhaps even we didn’t expect that this movement would gain such a big acceptance. Especially in Karnataka and South India, it has been fast. If any movement has garnered so much support and won, it is definitely the movement of sexual minorities.

We’ve been ridiculed, discriminated and faced such tough situations and this change is our big victory. You can see how we are being accepted. 20 years ago, people wouldn’t touch us with a barge pole. Today they hug, kiss and give us so much warmth.

SOM: What do you think is the reason for this change?

Akkai Padmashali: It’s because of the movement and agitation that’s come to the forefront. And also, because the Supreme Court recognised the transgender community as equal citizens and not criminals. This has boosted the movement. And the legislature, executive, judiciary, media and society are taking it forward. The once muzzled voices of my community are being heard. That I’m participating in the literature festival and everyone is listening to me is proof of this.

SOM: The LGBTQ community has its own problems all over the world, not just in India.

Akkai Padmashali: Every country has its own share of discrimination — colour, gender, language, caste and creed. Unless we understand human rights and fight for it, things will not change. The fight needs to continue. The global perspective needs to change in the context of accepting people on grounds of whatever they are today, in terms of sexuality, gender or political-religious stance.

SOM:  The change from being Jagadish to Akkai Padmashali too hasn’t been easy…

Akkai Padmashali: No!! It’s an extremely difficult transition. And I want to scream. Being a woman isn’t about just having a vagina. There’s more to it. I have an identity of my own and you better not decide that. And also understand that for transgenders, sex is a means of living. It’s not our life. There are more than 2 crore people belonging to the sexual minority in India today. Our existence matters. Treat us like human beings first.

SOM: There are still so many transgender people out there who aren’t as well informed as you or moved on. We do see them suffering still. How easy is it for them to join the mainstream or become like you?

Akkai Padmashali: There is diversity in society and we are trying to bring together people who understand this diversity.  When people hear me at such festivals, they go out and accept people like me, the change will happen and many more will join the mainstream. And, isn’t it wrong to expect everyone to be like me?  Why should you decide how someone should be? Isn’t that so patriarchal?

SOM: I’m referring to how you’ve moved on… your resolve, boldness and skills.

Akkai Padmashali: The struggles in my personal life are perhaps the reason for how I’ve shaped up. I am a 10th standard-fail student. I think to survive in this society, people like me need a certain set of skills and perhaps I developed that. Language skills helped me too. How did I pick up English? Read the dictionary, picked up words and learnt to string them together. You just need to give it a try and everything becomes easy.

SOM: In spite of the acceptance that we discussed, the fact still remains that people are still hesitant to employ transgenders?

Akkai Padmashali: Things will fall in place when the society stops looking down sexual minorities and start looking at them in a broader context of things. It’s already happening. People are working in High Courts and Civil Courts, Vidhana Soudha and Hospitals. In a few years they will all be in the mainstream.

SOM: Films have also been responsible in portraying your community in a derogatory manner.

Akkai Padmashali: It’s so difficult to deal with these film people. They portray the transgender community in such a negative way which is unacceptable. I spoke on the stage; I’ve been speaking to you for so long. Am I doing those stupid antics like clapping hands weirdly or moving my face stupidly with all the aahs and oohs? We are planning to challenge them legally, asking them to stop portraying us like this.

SOM: Is begging a necessity for the transgenders?

Akkai Padmashali: Even I begged and solicited as a sex worker for many years. I decided I want to get out of all this and luckily for me I found better avenues to earn. I learnt some skills and came to the mainstream. For many, this isn’t still easy. No one wants to beg or sleep around. But they will have to till they find better openings. Also, if I’m a sex worker I can earn Rs. 2,000 a day. I don’t have to beg all week to earn so much. But people beg when it’s the last resort. Do you know we have to pay the local Policeman, hafta to the local goonda and many more? What we earn from begging goes to so many people. Begging isn’t an easy option. Ironically, the same Policemen who shoo us away during the day, seek sexual favours from us at night.

SOM: What do you have to say to parents when it comes to accepting sexual orientation of their children?

Akkai Padmashali: Left by themselves, parents are okay, will be more accepting. But sadly, it’s the neighbourhood, friends who put all negative thoughts in them and make them prejudiced. Parents are more bothered about what society will feel, than how they feel. I went home after 5 years. I realised my parents weren’t as bad as I thought they were. If parents need to be more accepting, people should change and this change needs to come through education, awareness.

SOM: What are the plans for bringing the community into the mainstream, providing them a decent living?

Akkai Padmashali: The Government has brought out policies way back in 2017 and we are just asking for their speedy implementation as they have many advantages — financial and social empowerment.

SOM: You bagged the Rajyotsava Award too?

Akkai Padmashali: Yes, in fact, I asked former CM Siddharamaiah why he was giving me the award when I was actually fighting with his Government. He quipped that the award was to let me keep fighting.

SOM: You think all the support shown to you in public is genuine?

Akkai Padmashali: (laughs) Frankly all the public display of love and support may not translate into acceptance and inclusiveness. But well, at least some will and that’s encouraging.