Home » Columns » Abracadabra By K. B. Ganapathy » Musings on Tree Planting in our City 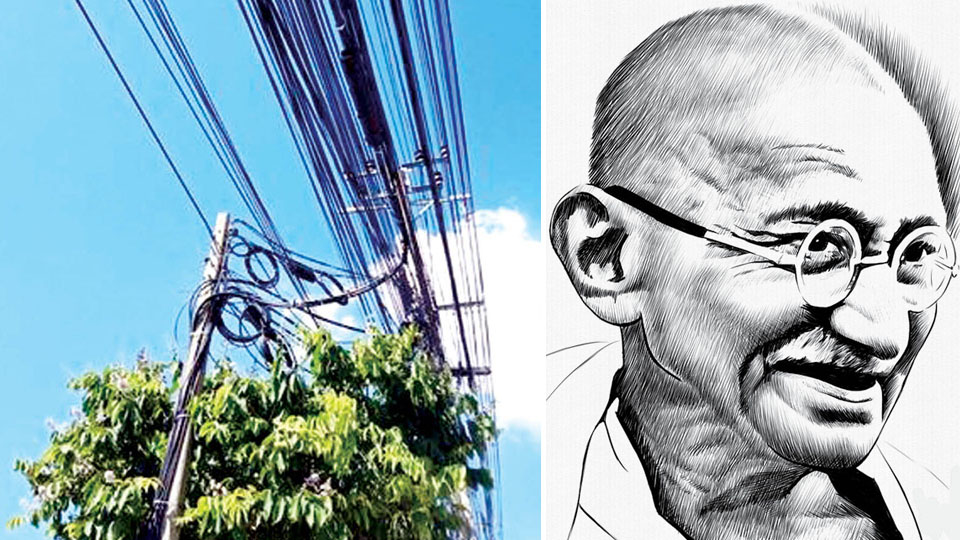 Musings on Tree Planting in our City

But for Democracy, Bureaucracy would have sealed our lips

It was Mahatma Gandhi who wisely said that he would rather have bad self-government than good foreign rule. I had an embarrassing experience of the danger of this Maha Udgarah, great declaration, from Mahatma Gandhi yesterday afternoon.

During morning walk, I noticed tree saplings were planted along the road in K.C. Nagar, where I stay and also in the surrounding areas. The authorities had already planted, in the past years, the saplings on one side of the road where there were no overhead electric wires. However, this year I noticed tree saplings being planted on the other side of the road where there are overhead electric wires.

I knew by experience that when these trees grow they would touch the electric wires causing power disruption. The tax-payer calls the Corporation, calls the KEB (CESC now), calls the Forest Department. Since there is no co-ordination between these three Government or quasi-government Departments, the tax-payer is left in darkness. He then sends his prayers to God… and as in the Bible ‘God said let there be light and there was light’. You know who that God is? Well, the local MLA or a powerful politician whom the tax-payer finally calls.

This is when we realise the importance of Democracy. We can find our voice through our elected representatives when the bureaucracy does not deliver or ignores our problem.

This kind of experience I had yesterday when I called a government officer to inform (not to complain) that the tree saplings were planted along the road in K.C. Nagar and other areas where there were overhead electric wires. I also identified myself as a resident of K.C. Nagar and as the Editor of Star of Mysore. The Big Boss was irritated right away when I said: Dwarf varieties…

He said, they were of dwarf varieties that would not grow for more than 3 to 4 feet height. I thought he was talking about flower-garden varieties and smirked. But he was unstoppable. “Do you know the species of the plants?”, he asked. I said no and added “I am only a journalist, not a Horticulturist or a Botany student”. I realised the conversation was generating heat at the other end and going at a tangent. Not to allow myself to be grilled like a culprit by a police officer, I put down the phone. Our Editor who was watching my predicament, called the God of the Tax-payer, S.A. Ramdas, MLA of my Constituency and asked me too speak to him.

I told the MLA about the problem, the kind of response I got and told him I know the tree species planted there would grow tall and touch the electric wires. It is best, not to plant trees under the electric wires. He seemed to agree. Now let me wait for the result.

I won’t be surprised if the officer convinces the MLA that they are of dwarf variates and hence may remain there.

By the way, I had told the officer that after all he would be here only for 3 or 4 years, but I have to live here all my life. Wonder, if he heard me at all…

When K. Harshakumar  Gowda was the MLA of Chamaraja Constituency he had developed the Jodithenginamara Road Grave Yard. Since the burial and cremation with rituals were visible to the road, I asked the MLA to plant Ashoka trees all along the road to cover the burial ground from public view. Apparently, he passed on the order to the Forest Department or the MCC. They planted Rain Trees on both the sides of the road. On my suggestion, the trees planted under the electric wires were removed. Now, no power disruption to those who have their houses and industry and no problem of cutting branches periodically to free the electric wires that get entangled in the branches.

Similarly, when Sandesh Swamy was the Mayor, in his over-enthusiasm, got  planted Honge tree saplings all along the narrow road going to Chamundi Hill. Already there are trees on either side of the road. Then why these new trees? I told him the road would get  further restricted and hazardous for the motorists. He inspected the place and then ordered the saplings to be removed. Yet, I see few saplings growing specially at bends!

We seem to forget we are our own rulers and this is our own country.

Well, when I see our bad and poor governance, I feel like disagreeing with Mahatma Gandhi whose words I had mentioned in the beginning of this column.