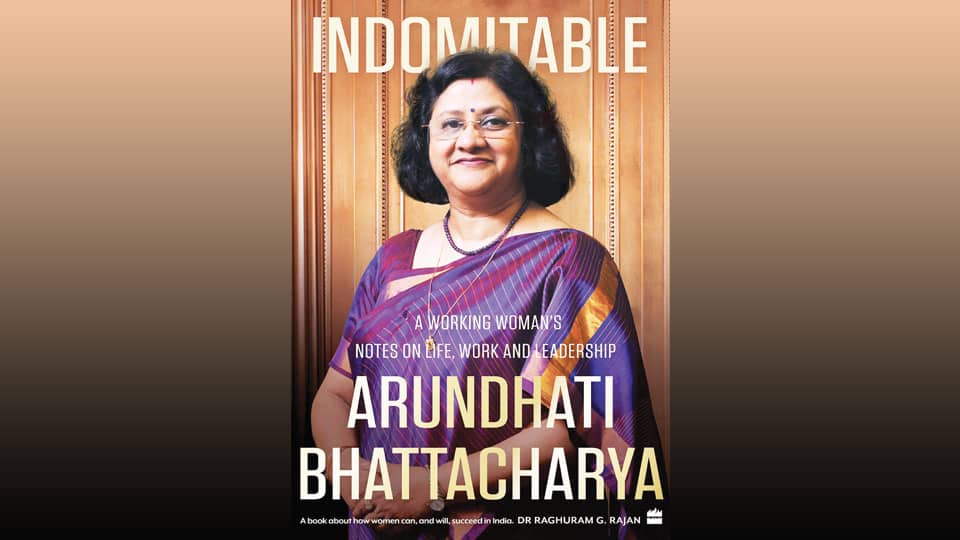 On 25.2.22, Dr. C.D. Sreenivasa Murthy, city’s well-known physician, gave me a signed book titled ‘Indomitable,’ an autobiography of Arundhati Bhattacharya, former Chairman of State Bank of India (SBI). He also gave me some star fruits from his backyard garden. Being ripe, we found it quite tasty sans the usual tang. Thank you doctor. Since I finished reading the book, with a bombastic title and of 320 pages, in neat 10 days, I decided to write about it, not review, as I found the book very unique, rather rare, for the genre of writing an autobiography.

It is a universal truth that this is a man-dominated world and women achievers in the competition in various walks of life are very few. And when we find one like, for example, Indra Nooyi of PepsiCo or as in the present case Arundhati Bhattacharya perching happy at the acme of this professional organisation we hail the person and shower encomiums no end. And indeed they deserve.

The book gives a sample of male chauvinism when Arundhati Bhattacharya becomes the first-ever woman Chairman — Chairperson — or just Chair (!) of the State Bank of India.

Within a day of her taking over, she was due to leave for the International Monetary Fund (IMF) meeting in Washington DC. Arundhati had asked for her visiting cards to be printed as ‘Chairperson, State Bank of India.’

However, when the sample card arrived, the SBI’s legal department (apparently dominated by men) nixed it by commenting that the SBI Act (of centuries old) had no such designation. Therefore, this woman Chairperson should stick to the title of the ‘Chairman.’ So she had to go to Washington carrying the visiting card that read, ‘Chairman, State Bank of India.’

Reading this, I was left thinking if this woman ‘Chairman’ took steps to correct this anomaly by making required amendment to this moth-eaten SBI Act, drafted 210 years ago by the British when it was the ‘Imperial Bank of England’ and adopted by free India in 1955.

If she has not done this, she has faulted or failed as the head of SBI in correcting this wrong. If her efforts failed, she should have written about it in the book. I know many of our laws, including jail manuals, smack of colonial mindset and those pro-British laws and rules are allowed to remain in the statute book as in the case of SBI Act.

Many leaders talk of correcting these colonial vestiges, but never get down to rectify them. Hope Arundhati might have taken action to get her visiting card printed as ‘Chairperson’ after she returned from Washington. She owes to her readers information on this matter in the next edition of the book.

Arundhati comes from an ideal Hindu middle-class family of Bengali origin. Her father was an Electrical Engineer who worked for Bhilai Steel Factory. His was a love marriage in 1947. He was  a Brahmin and wife Kayastha. Arundhati is the youngest of the three siblings — a sister and a brother. Undergoes usual problems in pursuing education and the family did not seem to have faced any severe dire situations in the life’s early journey — knowing the Indian middle-class she did not have to have an ‘indomitable’ spirit to overcome those situations described in the book. In a way it was lucky for this youngest sibling that her education up to Post-Graduation in English Literature was just hunky-dory. She displayed qualities of taking decisions and pursuing her goal with determination even as a student.

In an outspoken way, Arundhati writes about her birth — “It was totally unplanned.” Her parents could hardly afford another child. Her father, being the bread-winner of the family did not want the new addition to the family. He decides to abort the pregnancy but her mother vetoes it. So the rickshaw in which they had gone to the clinic was asked to take them back home. Here is an interesting conversation between husband and wife in the rickshaw in Arundhati’s words:

“On their way back, my mother told my father that she firmly believed that the new-born would come with its own destiny. If he or she was meant to grow up in poverty, so be it. But she would be the last person to stand in its way and he must have faith that all things happen for a reason.”

What a philosophy of hope!

Well, in retrospect there seems to be some truth in what Arundhati’s mother told her father in the rickshaw. Three months after her birth, the family’s luck turned the corner. Her father landed a decent job through the Union Public Service Commission (UPSC) and posted to Bhilai Steel Factory. Interestingly, her mother received a prize (for gardening) from Soviet Russia’s Premier Nikita Khrushchev when he visited Bhilai for its factory inauguration. It was built with Soviet collaboration.

Her mother was a homoeopathic doctor and a very good one at that. It was she who diagnosed Arundhati’s paratyphoid. Her mother’s philosophy, the second one I think, that ‘it is easy to give in to helplessness. But it is so much better to stand and fight.’ Her mother encouraged her to read books, have friends at all times — good times and bad times.

To ease the burden of the family, with her father retired from service without pension, Arundhati thinks of taking up a job even as she was graduating in English Literature. Indian Administrative Service (IAS) was the No. 1 choice but with English alone as her subject, she could not venture into IAS. So she takes the entrance exams for the Probationary Officers at Banks. She took the exam. Succeeded and her new journey in life began.