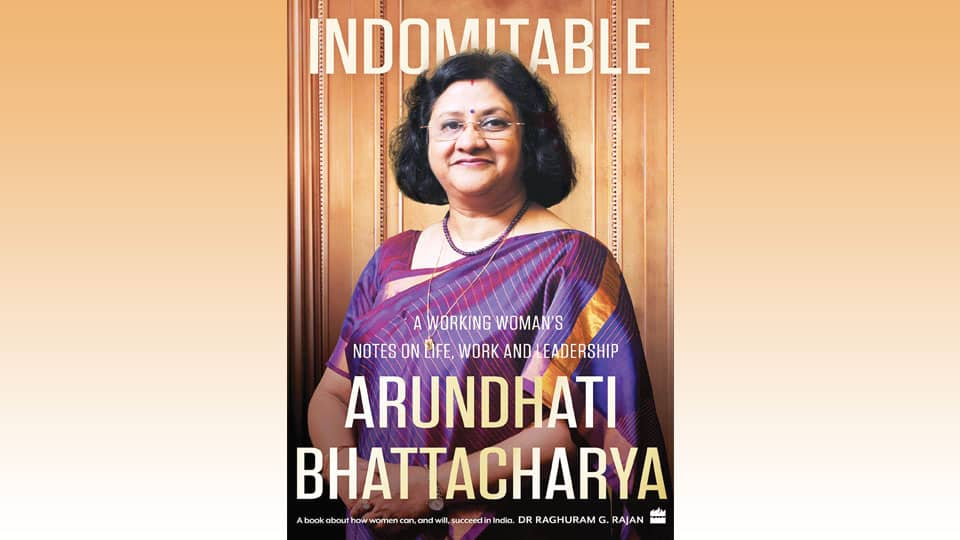 On Sept. 5, 1977, Arundhati Bhattacharya was sent to SBI Staff College, Hyderabad. After the training period, she was posted to her familiar ground during her student days, Alipore. This was her probation period of two years. She had further training at Vadodara in Gujarat. After this, her probation days ended and she was given her first permanent posting. I think it was a foreboding of a great future in SBI for Arundhati that her first posting was to the Forex Division of Main SBI Branch in Kolkata, the ‘largest hub of such activity in Eastern India then.’

Naturally, it was time for her (rather parents) to think of her marriage. Well, surprisingly, it was from her newspaper advertisement that her husband-to-be, Pritimoy, zeroed in on Arundhati as his future bride! That is life, that is destiny!

She was the accountant at the Kharagpur Branch with lot of problems and her husband’s counselling was on the lines of Solomon or Marcus Aurelius! (page 114-115)

Nine years in Kharagpur ending up as a Scale II Officer (in March 1984), promoted twice becoming a Scale V Officer, with no more position for promotion in Kharagpur. But her transfer did not happen while her husband was doing very well in his job in Kolkata. She decides to quit the job! Tries other jobs and further studies!! She did not succeed. Well, when she was destined for a highest office in SBI, how could she succeed here! Destiny.

And in April 1993, she was posted to Kolkata Park Street, Commercial Branch. A turning point. A challenge became an opportunity for her. From here her fortune blossomed rather unexpectedly. This branch launched its maiden Global Depository Receipt (GDR) issue. The branch was given a target for the amount of investment it needed to garner. How she alone performed the task is a testimony to her sixth sense in identifying a prospective client with that kind of investment and, despite impediments, the way she succeeds to the envy of those who were sleepy joes in the rival branch. Lo! The Bank’s higher echelons have identified a potential ‘Chairman’ already! Then on she began to interact with large Corporate customers.

Now, hope for a child and she conceived. She went through a difficult time, complicated by the fact that she was well past her best child-bearing years. Anyway her daughter Sukrita was born. Big opportunity arrives at her door. She and her boss, a man who was a dog lover, got called for an interview for foreign posting by the Bank. Both of them got selected, “but all hell broke loose when the posting finally came. I had been posted to New York,” whereas he was posted to a small branch. To add to her problems, her child Sukrita being born six weeks premature had health issues. Her doctor’s advise is earthly and even metaphysical: “You have a long battle ahead of you. But where there is life, there is hope. Never forget that and never give up.”

She never gave up. The way she went about preparing for her posting to New York — building the support-line — is amazing. Despite many odds she succeeds. This despite her Boss not co-operating with her. Look at this. She says: “He refused me all leave, and would not even allow me to attend the training one underwent before departure.” Well, one must assume that this Boss must be the cornucopia of evil. Specially when we learn that the victim was a woman.

For those who take maids (passing them as aunts) to America here is a very interesting episode. Here though, the ‘maid’ is not maid but her real aunt. The verbal confrontation between the Passport Officer and Arundhati and finally the old aunt herself is interesting to read (page-142). A highly qualified aunt, living alone at her age, pulls out all her academic certificates and more before the unyielding Passport Officer who was flummoxed and quietly ordered issuance of a Passport.

In New York, she visits many places like Art Gallery, Central Park, Christie’s (art auction) where she could see Pablo Picasso in close quarters and how she just escaped from the “Ambulance  chasers” — attorneys who file compensation cases. She had slipped on ice and fractured her arm. The ambulance came and no ‘ambulance chaser’ as it happened close to her house. Lucky.

She writes about the difference in American English and the English we speak and understand. They do not know what perambulate is. The sales person would ask: “What’s that dearie?” When explained, the sales person exclaimed: Oh! You mean a stroller.

READ ALSO  At last a Memorial for Swami Vivekananda

In US ‘flat’ means flat tyre not an ‘apartment’ as in India. In US it is not ‘footpath’, it is ‘side walk.’ All oral pills come with the instruction ‘Take by mouth.’ Well, is there any other way of taking it? My ass! Thus the list is unending but revealing the differences in understanding the same language.

She recalls her bad experience with the New York Securities and Exchange Commission (SEC). She narrates about the prosecution emanating as a result of Resurgent India Bonds (RIB) launched by her Bank to garner Forex Deposits… and how the oral promise and assurance given to the Bank by SEC New York was denied and launched an investigation. Arundhati and her colleagues leant their lessons the hard-way. She says: “The learnings from that experience underlined the need for documentation and for following due process.” Not to trust a promise or oral permission.