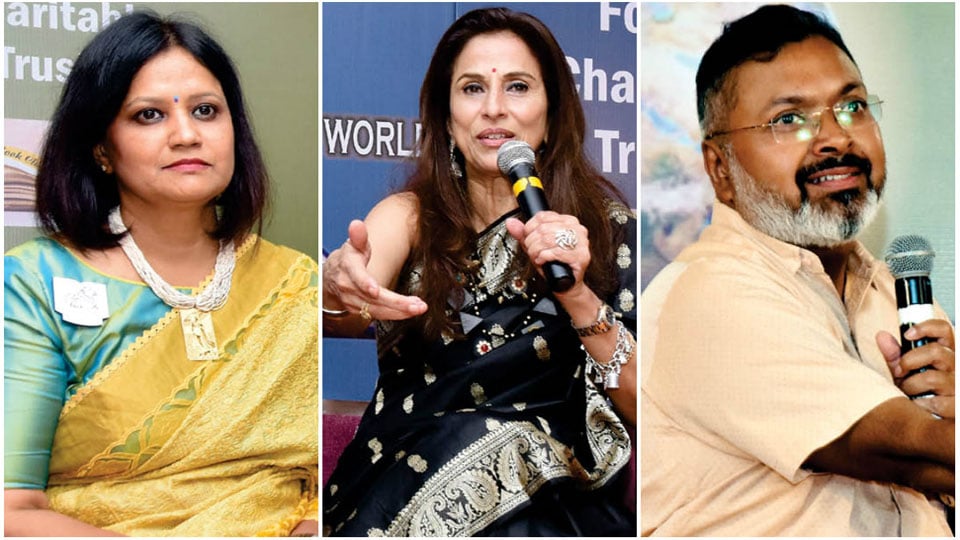 The fest was inaugurated by Dowager Pramoda Devi Wadiyar of Mysore Royal family and this had added an additional glow to the festival. This was followed by the keynote address by well-known Mythologist, Management Consultant and author of nearly 60 books Dr. Devdutt Pattanaik. I have a special reason to be happy of his choice because when Star of Mysore celebrated its 40th anniversary on Feb. 17, 2018, our choice for the main speaker was Dr. Devdutt Pattanaik. Of course, as a newspaper, we opted for a politician, late H.N. Ananth Kumar, the then Union Minister, for inauguration.

Be that as it may, I  raise my imaginary hat and tilt my head slightly to salute the Chairperson of the Trust, the young and quietly dynamic, bursting at the seams with enthusiasm, Shubha Sanjay Urs and, of course, her committed team of Trustees like Raian Irani, Vice-Chairman Sam Cherian and volunteers.

Having attended the events on both the days, I could vouch for the fact that all these literary warriors surely worked in the spirit of the legendary Three Musketeers — One for all and all for one. Naturally, such solidarity cannot but bring success and indeed the festival was an immense success.

Interestingly and thoughtfully, as if to respect the sentiments of lovers of Kannada literature and culture, the organisers  had simultaneously hosted the festival of Kannada literature (Mysuru Sahitya Sambhrama) as well in the same premises. Needless to say that the presence of the internationally known Theatre Director, Script Writer and Film-maker T.S. Nagabharana had enriched the events related to Kannada.

Small wonder, the organisers could get some of the well-known names in the field of English literature, not forgetting the young authors like Manu S. Pillai (The Courtesan, the Mahatma and the Italian Brahmin); Raghu Karnad (Farthest Field: An Indian Story of the Second World War), son of the legendary Girish Karnad, the Playwright, who recently passed away; Mahesh Rao from Kenya (One Point Two Billion) to name a few.

As for other VIP names, heading the list is, of course, the omnipresent and even omnipotent, Shobhaa De. What with six children, six grandchildren and some books (De is the author of more than a dozen titles, all of which start with the letter “S” [Sultry Days, Starry Nights, Strange Obsession etc.]). She discussed about her latest book “Shobhaa at 70 — Selective Memories” that happened the following day, Sunday the 14th, at 9.30 am sharp. Like her writings with heavy dose of sex and sensuality, her answers to the posers from Mahesh Rao, the panellist-anchor, too were as interesting.

According to her, Free Press was a myth in the past, in the present and will be so in the future. I thought she should know having been an editor of three magazines herself. She recalled the days of Emergency when she had to redo almost 90 percent of Stardust, the film magazine she was editing, at the 11th hour before going to the Press. All because the almighty Censor of the Emergency Days had found fault with what was written on Amitabh Bachchan, who was then a very close friend of the Gandhi family. When Mahesh Rao asked if the censorship of Emergency Days was as bad as now, her instant reply was, “Not exactly…BUT…” No wonder, earlier she had expressed her opinion that Free Press is a myth.

Later, when she was requested to take a few questions from the audience, I chose to be the sinner and threw my stone of a question at her: “If, as you said, Free Press is a myth, then and now and will be so in future, asserting there is nothing like Free Press, my question is: ‘Does it mean that the Press has been providing only myths and fake news to its readers?’”

I thought she would field the question well and knock me out. But, the question was simply tossed into thin air bringing in the name of American President Donald Trump, who had coined the word ‘Fake News.’ Naturally, the answer evaporated. Here I remember K.N. Shanth Kumar, Director, The Printers Mysore Private Limited, publishers of well-known newspapers Deccan Herald and Prajavani, when he was engaged in a dialogue with Vikram Muthanna, Managing Editor, Star of Mysore, on the first day of the Festival. Sreenivasan Jain, the popular anchor of NDTV, too was there in the Panel.

Answering a question from the audience about fake news, Shanth Kumar explained with absolute clarity the difference between a mistake in publishing a news and a fake news. According to him, a mistake in publishing a news should not be mistaken for fake news. Fake news is intended to disinform, manipulate and mislead the reader, while a wrong news is published due to human error and it will be corrected the following day or whenever the mistake is noticed by the publishers. Whatever it is, while introducing Shobhaa De, the audience was assured of a scintillating and irreverent conversation with her. I was not disappointed though I was disappointed with her answer to my question.

Another panel discussion I attended was that of Raghu Karnad, who was engaged in a conversation with Air Marshal Nanda Cariappa. The topic was Raghu Karnad’s book ‘Farthest Field: An Indian Story of the Second World War.’ Here I  remembered what Dr. Devdutt said while giving a talk on Ramayana Vs Mahabharata. He was elucidating on the nature and character of Purana (mythology) and history. According to him, the Puranas and epics were written (I guess at a time when there were no newspapers) as it happened because we find the authors of these epics themselves playing a role in the story (or history!). He also said that history is always written many years or even centuries after the event. Looked at from this angle, Raghu Karnad’s book may have many events and details distorted as they would have faded into the dark womb of history where it has become invisible and hence beyond the reach of our historians.

Curiously, many tricky questions arose because of the colonial British Army comprising Indian foot soldiers and Non-Commissioned Officers fighting for British interest while the freedom movement was also gathering steam. Parallel to the ‘non-violent’ freedom movement, INA of Subhas Chandra Bose, comprising mostly the British soldiers (of Indian origin) who were captured by the Japanese Army was also fighting for freedom. (Japan was winning in the Eastern War-Theatre against the Allied Forces). It is interesting to note that Japan, which was sympathetic to INA, released these (Indian) soldiers and allowed them to join INA. A peculiar situation of dilemma was thus created in the minds of the British Colonial Indian soldiers serving in the British Army.

To Air Marshal Cariappa’s surprise, Raghu Karnad was shooting a question to the Air Marshal about his father Field Marshal K.M. Cariappa. ‘How your father, then in the British Colonial Army as an Officer, felt and what were his perceptions?’ For a moment I thought it was an embarrassing question as much as a difficult one for Field Marshal’s son to answer. Certainly, the questions of loyalty to the Army they are serving and the desire for freedom to their motherland come in conflict with each other.

I was happy that Air Marshal  point-blank refused to take the question and went after the youngster, Raghu Karnad, head-on reminding him that they were discussing the book, not his father.

These days, I notice a number of young authors, who have published just one book, speaking English with an accent, being projected by the publishers and organisers of literary fests as celebrity authors. Their second book may come after 10 years or not at all. But then, they will be talked about as authors and celebrities of sorts. Well sir, one sparrow does not make a summer.