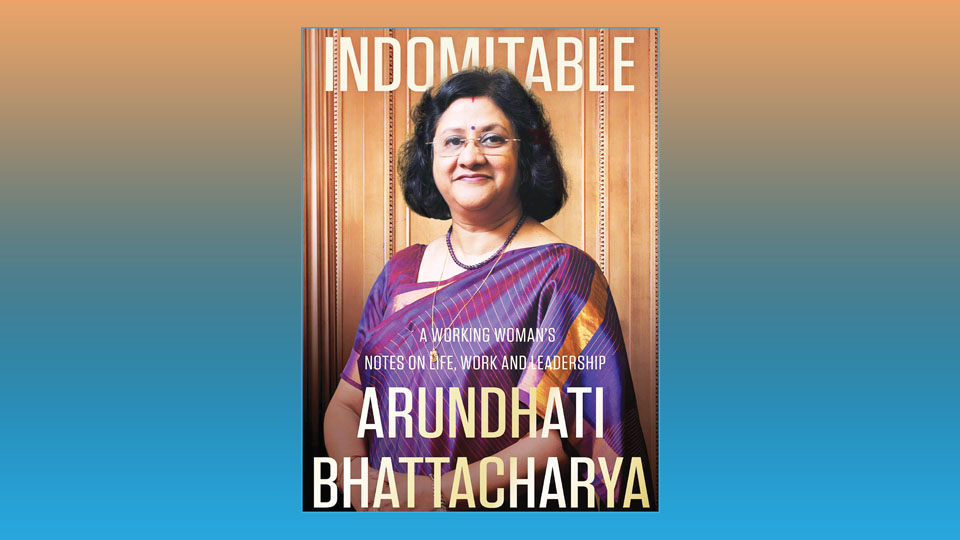 Arundhati completes her four-year assignment in New York and changes in the family affairs take place with her husband joining her, taking a job in US etc. Anyway she was still an Assistant General Manager (AGM), posted to Kolkata at Bank’s Foreign Department, which handled the Treasury Operations. A big responsibility indeed. Her leadership qualities were displayed every time there was a problem relating to employees or modernisation. For example, there was protest for computerisation — loss of job, lack of skills etc. She fixes it. Her promotion to Deputy General Manager (DGM) came about; that was the first step for going up for the senior management position. The die was cast for her ultimate position as Chairman, one would guess.

However, her domestic problems, with daughter Sukrita to be looked after all the time, was haunting her so much she was almost at her wits’ end about how to manage the situation and the possibility of leaving the job loomed large.

“And then, my prayers were suddenly answered,” she writes. She found one Sulekha to look after her domestic affair, including Sukrita. Now she was able to give time to her work and career. And her promotion as GM came in August 2005. She was transferred to head the Bengaluru Circle. She gives a detailed description of the 10-acre area of the Bengaluru Circle with her residence that was originally occupied by Mark Cubbon, Commissioner of Mysore Kingdom (page 197). Name of the Bungalow — ‘Hopeville.’ To deviate, while in Bengaluru, I had a SB account in this Branch of SBI.

Arundhati is an example of an officer who is pro-active. It appears the huge campus had 6 gates, all open, ill-maintained and the public would park their cars for free all the time. She put an end to all this, kept only two gates open and maintained the area properly. Wonder why her predecessor in office never thought of taking care of the property belonging to the organisation that gave him his bread and butter. They are parasites. Perish the thought. Not patriots. Now she gets a promotion as Deputy Managing Director and sent to Bombay. Again interview with Promotion Board and more, she becomes MD and finally she took over as the Chairman on 7th October. A journey that had started 36 years ago had now entered its final lap.

READ ALSO  Judge’s Day of Judgement: A scandalous Saturday for our Supreme Court

Rest is history and this Autobiography!

Now let me add this bottomline to Arundhati the woman’s story. Her interview for the Chairman’s post was done (page 214).

“Pratip Chaudhuri was to retire in September and there were rumblings that a new policy was being framed. Under the existing policy, I was the only eligible candidate. This was soon revised, stating that all four MDs in position at the time of the Chairman’s retirement would be eligible, regardless of residual service and would be given a fixed tenure of three years.”

Apparently the new policy was framed by the male chauvinists. So be it.

But, fortunately when the incumbent Chairman retired there was no news from the Ministry about who would take over. Yes, news came. It was Arundhati Bhattacharya. However, I guess there was some gender prejudice when a new policy was planned, to be framed. It is not mentioned whatever happened to that ‘rumblings’ about the ‘new policy’.

This autobiography is no doubt descriptive in narrating the places and events but there was no need to bring in many frivolous incidents that happened in her rather long journey, personally and professionally. Of course, it is her preference. Interestingly, she touches on a number of Bank-related issues like NPA in agriculture, one-time settlement of huge loans, bankruptcy law which is a “game changer in the Indian landscape” (I think Modi brought this law) and not forgetting merger of its 7 associate Banks and acquisitions. She admires Pradhan Mantri Jan Dhan Yojana (PMJDY) as the most successful ‘financial inclusion programme.’

She writes about the Demonetisation introduced by Modi Government in November 2016 and she was the Chairman of SBI (page 273). Arundhati says, the bigger challenge for the Banks was looming as a result. The new notes were smaller and thinner in dimension, meaning that all ATMs would have to be recalibrated manually to dispense these new notes. There were many other challenges as a result, like logistics of getting the new notes out to the branches and more. It was a mess for the common man and a web for the Banks. But, time took care of the mess and in time all was okay as is now.

October 6, 2017 was her last day in office after four years as SBI’s Chairman. Indeed she has acquitted herself creditably and beyond any ‘man’ would have done during those days of Modi-kind of radical changes in SBI’s banking system. The book will be a very good master-guide to all those who look for a career in banking. Therefore, this is more than a mere autobiography, it is a road-map for both the employees and the management.

And what about erasing gender discrimination? Arundhati somehow managed to escape from that snare set up by the authorities calling it as ‘new policy’. Luck? Destiny? Ask Arundhati’s mother who asked her husband to turn the rickshaw back home from the abortion clinic!