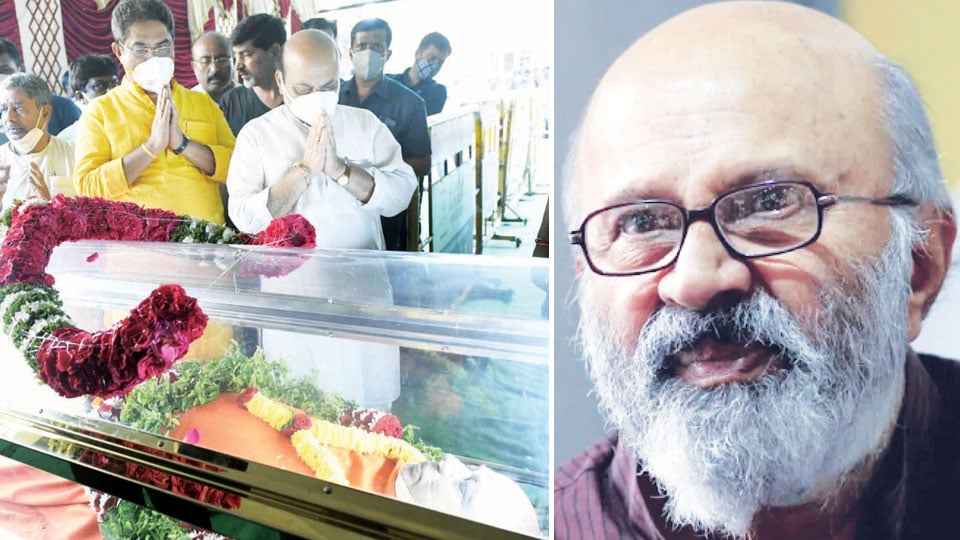 Bengaluru: The last rites of veteran Kannada film actor S. Shivaram (83),who passed away at a hospital here yesterday, was held this afternoon at Banashankari Crematorium here with State Honours.

Veteran actor Shivaram, who was undergoing treatment for brain haemorrhage at a private hospital, passed away on Saturday afternoon. His body was shifted from the hospital to his residence here.

Shivaram was admitted to the hospital on Tuesday (Nov. 30)night after he reportedly collapsed while performing puja at his residence ahead of his departure on a pilgrimage to Sabarimala.

He leaves behind two sons and two daughters.

Shivaram’s mortal remains  was kept at Ravindra Kalakshetra for a couple of hours this morning for public viewing, before  it was taken for cremation.

Shivaram was  a versatile  and gifted actor and had worked with most of the biggest film makers and actors in his six-decade journey in the film industry.

Shivaram, who was fondly called as Shivaramanna in film circles,  was associated with the film industry since the late 1950s, first as an associate director and later as a character and comedy actor. He later turned producer with his brother S. Ramanathan and launched ‘Rashi                               Brothers’ banner.

Shivaram, who made his debut as an actor in the 1965 film ‘Beretha Jeeva,’ played memorable roles in the films of renowned  Director Puttanna Kanagal, including Upasane (which he also co-produced), Sharapanjara, Shubhamangala and Naagarahaavu. He acted with late Dr. Rajkumar in several films , including Bangarada Panjara, Sipayi Ramu, Chalisuva Modagalu and Halu Jenu.

Shivaram was  a regular in Dr. Rajukumar’s films and had a long standing friendship with top actors such as Vishnuvardhan and Ambareesh. A well-read man, Shivaram had a library at home and loved collecting books. He was active on the small screen till his last  and was the backbone of Karnataka Artists Association.

Shivaram was a recipient of many prestigious awards including Dr. Rajkumar Lifetime Achievement Award (2010-11) and Padmabhushan Dr. B. Saroja Devi National Award (2013), in recognition of his contribution to the Kannada filmdom.

Several lead actors and others in the film industry and outside paid their last respects to the departed actor.

Chief Minister Basavaraj Bommai, Revenue Minister R. Ashoka  and several other political and film personalities  have condoled the death of the veteran actor.

Chief Minister Basavaraj Bommai who paid his last respects to the versatile actor yesterday, said that Shivaram’s death has come as another jolt to the Kannada film industry, which is yet to recover from the passing away of Puneeth Rajkumar. Former Chief Ministers Siddharamaiah and H.D. Kumaraswamy were among those who paid tributes to the departed actor.