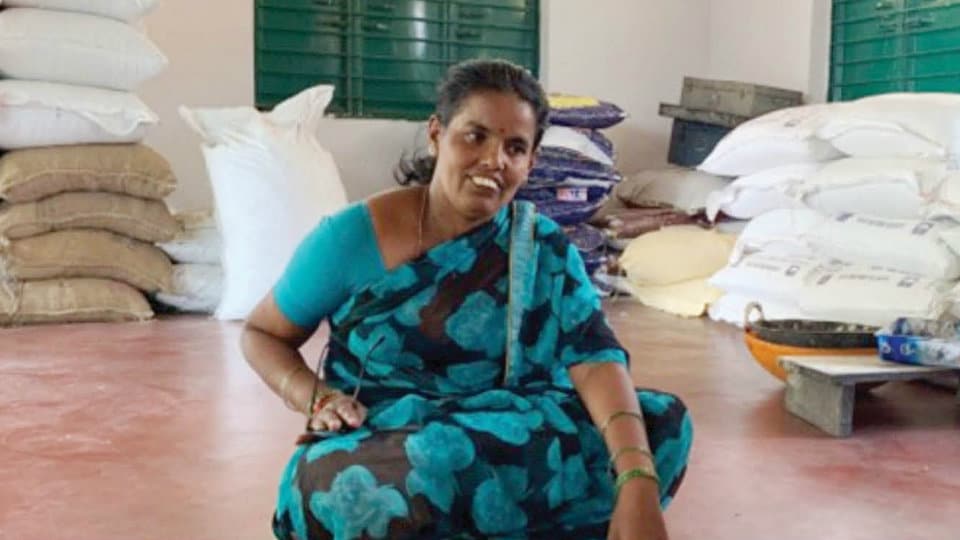 Kamakshi and her life is an inspiration not just to women, but to all people engaged in the endeavour of human development. I got to know of her through one of my colleagues who interacts with her on a regular basis. Kamakshi and her family reside in Shanbhoganahalli in Hunsur taluk on the outskirts of Mysuru. I met her a few days ago and she came across as any other typical rural woman. But once she started talking about her life and work, I realised that she was no ordinary person. Being born in a poor household with two other sisters meant a life growing up in poverty. Despite the socio-economic challenges, her father insisted that all the three daughters go to school and she managed to get herself a high school education. It was around the late nineties, that her sister got to join a Self-Help Group (SHG) promoted by an NGO in her village. Kamakshi too wanted to participate in it but was denied membership. Not the kind of person to give up, Kamakshi decided that she would start her own SHG instead. That is how the Yashaswini SHG began 20 years ago in April 1999.

From a small 10-member group then to being one of Karnataka’s most successful woman group, the Yashaswini SHG has come a long way under her stewardship. She not only mobilised the women to come together and save regularly, but also ensured that each one of them was trained in organising themselves, in basic book-keeping and in enterprise development. Over time, Kamakshi built the group to run its own co-operative selling fertilisers and other agri inputs to local farmers and getting women to make incense sticks in their spare time. These agarbathies are being marketed under the brand name of ‘Vandana.’ Kamakshi has inspired hundreds of women not just in her village but also in the surrounding ones to come together and collectivise themselves into Self Help Groups.

Another humiliating incident in the early days led her to start another successful enterprise. The women had gotten together to celebrate International Women’s Day and had invited local bigwigs to attend the same. As they had no money for an elaborate function, they had organised the event under a tree. The dignitaries found it disgraceful to sit in the open under the hot sun and created a scene and shamed the women by asking them not to conduct events if they did not have the ability to have a proper shamiyana and stage. While this left the women saddened, Kamakshi saw an opportunity here. She decided that they would use their savings to buy the required tent material and run a shamiyana rental agency. Today they are one of the largest suppliers of such material and rent it out to all local events and marriages. And Kamakshi proudly mentioned that they employ men to do the work of erecting them.

In the course of the conversation, Kamakshi mentioned about the several challenges that she had faced these last twenty years. From her family, including her husband taunting her, to the men in the village constantly creating barriers for her, she has seen it all. From being beaten to the several false cases filed against her, she seems to have had her share of issues. Beneath the soft-spoken exterior, her strength and courage of conviction seems to flow gently. She is more than ever convinced that women are extremely capable but need to negotiate several challenges in a male-dominated system.

From finding resources to building relationships with the Government agencies

to convincing bankers to lend their groups’ money, nothing has come easy. She quietly mentions that it is these challenges that has made her into what she is today and people from across the State and country come to visit her and learn from her success. And amidst all the limelight and fanfare, Kamakshi has remained grounded and clear in her purpose. She knows that women empowerment is not a mere slogan or a 1-day celebration but needs to be a journey with the destination constantly moving ahead. And that she cannot do this alone. Despite all the adulation and fame, she has managed to keep her team members inspired and together. Like a true leader, she is not hesitant to share the credit with everyone around her. She insisted that I meet with Veena and Pavithra and made them share their journey with me.

The one question that I am asked in the several leadership workshops that I run is whether ‘Leaders are born’ or ‘Are they made?’ And my conviction is that leaders are made and that each one of us has the potential to exercise leadership. Many of us have ‘crucible’ experiences and some of us decide to do something about it. Kamakshi was one such who refused to accept the denial of membership into a SHG. Founding organisations is only the beginning but to have a vision, to share this vision with others and to inspire them to realise this vision takes a special kind of person. And it is such people who exercise leadership in the true sense. Kamakshi today earns more than Rs. 1,000 a day, but then she mentions that she is not happy about this. For her happiness is to see every woman in the several SHGs that she has promoted earning this kind of money. And more than money, she says that true happiness for her is having her dignity and self-respect intact. And it is this sense of independence and self-respect makes her reject the freebies that local politicians’ have tried to tempt her and her group members during the election season.

From a rustic rural woman with basic education, Kamakshi reflects the confidence of a self-made CEO today. She talks of how they have diversified and built a catering business driven by the strengths of women; her recognition of the need for men to work for their shamiyana business and how she wants to continue the agri-business more for the social considerations than economic ones. Her clarity of thought, her perseverance and focus on the work at the centre is reflective of a true leader.

And, amidst all the pressures of being a community leader, Kamakshi has also learnt to balance her personal family life with her community role. Her older son has a M.Com degree and helps her out in managing their farm and in her work. Her younger son is a lawyer and practices corporate law. And she oozes maternal pride when she talks about them.

Leadership is not just about a position or using authority, it is about carrying the burden of responsibility amidst enormous adversities and Kamakshi has learnt all this by hard experience. But the leader in her has only made her learn lessons of humility and increased her convictions in the strength of ‘collectives’. For Kamakshi, leadership is all about building the community of women around her, not just socially but economically too. And she wants to continue to do it in her own quiet way.

[Dr. R. Balasubramaniam, the founder of Swami Vivekananda Youth Movement & GRAAM, teaches leadership at Cornell University and IIT-Delhi.  He can be reached at: [email protected]]