Home » Feature Articles » A citizen’s letter to the Chief Minister… 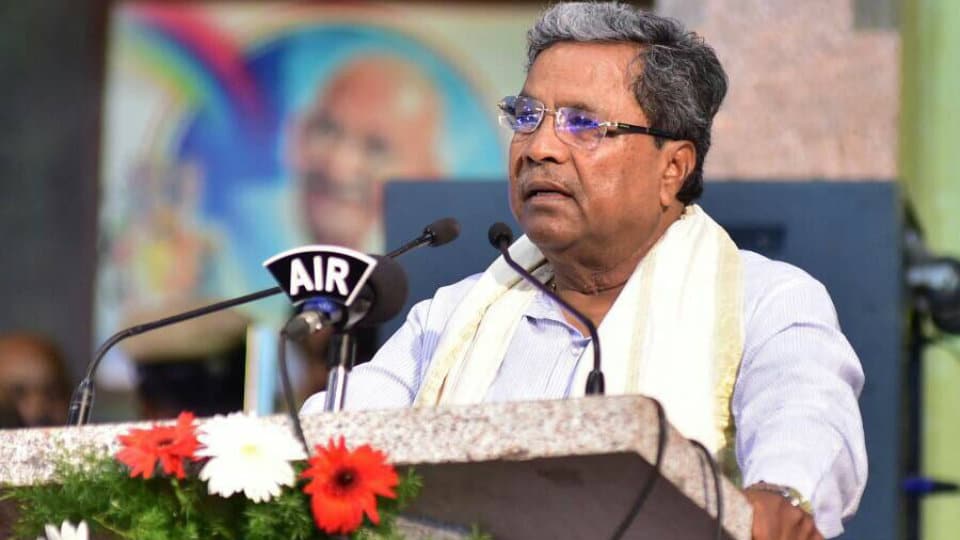 A citizen’s letter to the Chief Minister…

Last week saw a mega ‘tamasha’ unfold in our city of Mysuru by your Government… I am sure your officers would not have told you that the main arterial thoroughfares of Mysuru were blocked with buses coming in from all directions putting the city into disarray.

Each of your departments and their officials were vying with each other to bring in thousands of people from our areas in hundreds of buses. Everyone seemed to be heading towards the Maharaja’s College Grounds in anticipation of the mega event that was unfolding. And all this was being done in the name of development of Karnataka.

While everyone would agree that this event has actually kicked off your electoral battle for next year’s assembly elections, no onein your Government or in the Opposition seemed to ask the question ‘whose development was all this aimed at?’ More than 25,000 families in Mysore district were the recipients of your Government’s largesse when you and yourcolleagues handed out various benefits of different schemes to them.

This event labelled ‘Sarakari Soulabya Vitharana Samarambha’ was like arural ‘jathre’, wherein different products were being made available to people. The only difference is that the citizens could not get what they really wanted and needed, but had to take what your patronizing Government gave them.You and your cabinet colleagues in all your finery also promised more such mega events to ‘develop’ the people of Karnataka. I beseech you to let us common people know how much the tab was for this event, which some estimated to be around Rs. 25 crore.

I am not trying to make the point that many of the people receiving these much-needed benefits are undeserving of getting them. I am only trying to argue the case that your Government may not have truly understood the difference between political doles and true development.

While you may argue that every other party and political leader of the recent past has been guilty of indulging in such theatrics where thousands of crores of rupees worth of goods and services are distributed to ‘beneficiaries’. We have seen many such mega-events take place in different district headquarters, with either yourself or the district minister in-charge personally ‘gifting’ away these Government benefits.

One can understand that it is your Government’s responsibility to ensure that the poorest of the poor do not lose out on the benefits of development. But I would like to have your assurance that it is the poorest and the most deserving that are actually getting these benefits. You may be aware that Karnataka State even today does not have a scientifically validated method of measuring poverty or of identifying people who truly deserve support.

There is no clear policy that you have outlined on what is the development approach the State should take nor a strategic vision of where Karnataka and its citizens should be, say by the end of your term. The State Planning Board is more of a notional body with no technical expertise and I am afraid that it has been reduced to a rehabilitation agency housing semi-retired people.

When your Government had the last 4 years to initiate development processes, why is it that you are now doling out freebies? Why could you not have had mechanisms to implement well-thought-through development interventions that focussed on building the human and social capital of the poor and the marginalized?

If money spent on such ‘tamashas’ could truly benefit the poor, one wonders why we still have so much poverty around us. A common man like me has begun to feel that most of the decision-making is done based on political realities rather than on the development consequences that you want to achieve.

Apart from treating our own citizens as mere recipients of your Government’s patronage, I am afraid that these events snatch away people’s dignity and self-respect. How will the MLAs feel if they are made to stand in line and receive their I-pads and Laptops from a more than generous Government under full public and media glare? Our deserving poor cannot be made to feel like mere beneficiaries and be given doles under such visibility and public gaze. They need the help of your Government machinery that understands their poverty and gently facilitates their social and economic mobility upwards towards self-reliance.

I am sure that you will remember how Mahatma Gandhi always said that our poor had to be treated with the greatest respect and the State should never make a mockery of their poverty. What events like these do is exactly the opposite. In order to achieve narrow political gains, it makes the poor vulnerable and robs them of their dignity and self-respect. It also dis-empowers them and takes away the human spirit of enterprise. I am hopeful that you having been groomed in the philosophy of Lohia’s socialism surely will understand my pain and agony.

What I would like to request you and your cabinet colleagues to do is to ask yourselves, ‘Whether the numerous schemes that you have launched till date are truly initiating and promoting the much-needed development?’ Is the return on investment proportional to the thousands of crores of rupees spent till now? Who is to ensure accountability in the system? Will the political or the bureaucratic executive take the responsibility of ensuring that this money will be well spent and every person receiving the benefits is truly deserving of the same and will join the economic mainstream?

We have had numerous such events happen in the past and we as citizens of this State would like to know how much of poverty have they helped in alleviating. Instead of mere doles, shouldn’t the Government take a fresh look at its own budgetary allocations to the poor, the development of the scheduled castes & tribes and the marginalized?

Isn’t it yourGovernment’s responsibility to inform the citizenry who is paying for these mega events? Is it coming out of the public exchequer and if yes, under which head of account is it accounted for? If not, are the myriad contractors involved in the scheme paying for the same? We do have the right to know.

Unless your Government decides that the concern for development goes beyond petty politics and revolves around genuine social concern for the poor, and is willing to subject itself to measurement and accountability, the good governance that you promised when you came to power will continue to be a casualty.

Your schemes will only be helping the citizenry to merely cope with poverty instead of permanently climbing out of it. My fond hope is that a man of your administrative experience and understanding of the problems of the poor will go beyond the politics of poverty and use the next one year to usher in the much-needed development that we had hoped you would give the State.

With regards and hopes for a bright future for the State,

A concerned citizen’s agonising cry for human development in Karnataka.

[Dr. R. Balasubramaniam is a development activist and Founder of Swami Vivekananda Youth Movement. He can be reached at [email protected]]