Home » News » Left to Dry: Lingambudhi Lake dries up after many years 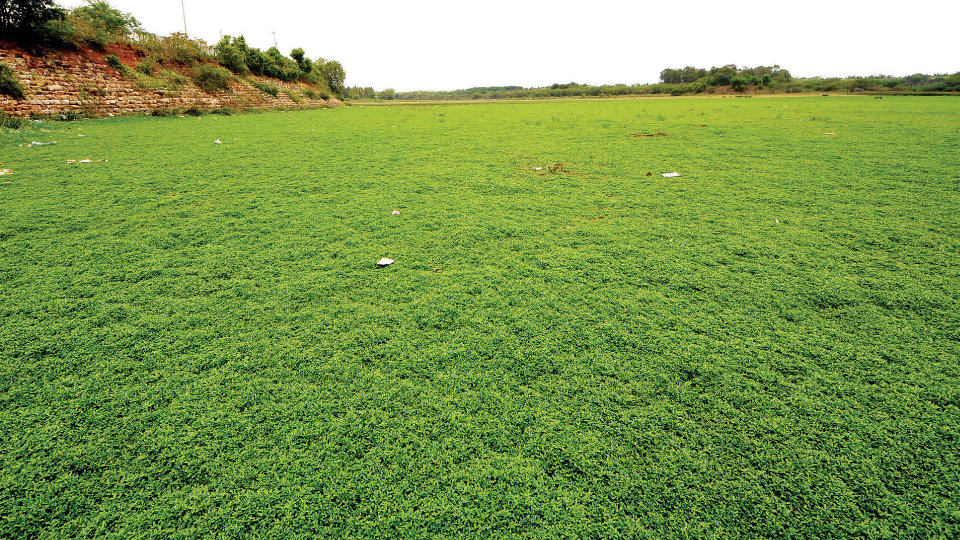 Left to Dry: Lingambudhi Lake dries up after many years

Mysore: Even as the members of the Lingambudhi Lake Welfare Association have demanded the Mysuru District Minister’s intervention for rejuvenation of Lingambudhi Lake, the picturesque Lake has gone dry.

Some of the factors that have contributed for the drying up of the Lake are soaring temperatures, fast depleting groundwater levels, damage to lake bunds, water hyacinth growth and rampant encroachment of storm water drains that feed the Lake with water.

290-acre Lake: The Lingambudhi Lake is nestled at a distance of about 7 kms from Mysuru, beyond the south of Ramakrishnanagar and the Lake stretches across an area of about 290 acres. It is one  of the biggest and oldest Lakes in Mysuru.

History says that the Lingambudhi Lake was constructed by Krishnaraja Wadiyar III as part of building the Mahalingeshwara Temple and as an act of thanksgiving to Goddess Chamundeshwari. It was named after his wife Lingajammanni. Built in 1828, the Lake houses a wide variety of species of birds and bio-diversity.

Parched water body: Sadly, the Lake has gone dry after several years of sustaining bird, insect and animal species. The Lake comes under Forest Department and the Department has fenced the Lake surroundings preventing further encroachments.

The present sight of the parched water body is a far cry from its halcyon days, when the Lake would be full of water, with migratory and local birds chirping. Officials of the Forest Department led by Deputy Conservator of Forests, K.C. Prashanth Kumar and RFO Govindaraju, visited Lingambudhi Lake recently.

Designated as an ‘Important Bird Area’ (IBA) by the Bombay National History Society, the Lingambudhi Lake is an avian biodiversity hotspot.

Interestingly, about a decade ago, the Lake was revived using funds from the Asian Development Bank (ADB), but encroachment of its feeder canals and storm water drains later on has choked the Lake, turning it into bone dry. Besides, the encroachment of canals in the water body’s catchment areas, mushrooming of residential layouts has resulted in a marked decline in inflow to the Lake and seepage from the bunds accelerated the depletion of water.

While Kukkarahalli Lake gets backwash water from Vani Vilas Water Works, Lingambudhi Lake does not have that facility and apart from feeder canals and storm water drains, there are no other water sources for the Lake to sustain.  Further, underground drain water from Vivekanandanagar, Bogadi, Ramakrishnanagar and surrounding areas flows into the lake, polluting it. And added to the mess is voluminous hyacinth deposits, making it poisonous for even aquatic beings.

Speaking to Star of Mysore, DCF Prashanth Kumar said that a delegation of Dattagalli residents came to the Forest Department last week seeking desilting and rejuvenation of the Lake. Later on, the Department took the locals to the Lake to discuss its development.

“The public suggested desilting and filling it up drawing water from Kabini Canal. We will consult experts in various Government agencies including those in the Revenue Department, Mysuru Urban Development Authority (MUDA) and draw up a comprehensive plan to rejuvenate the Lake,” he said.