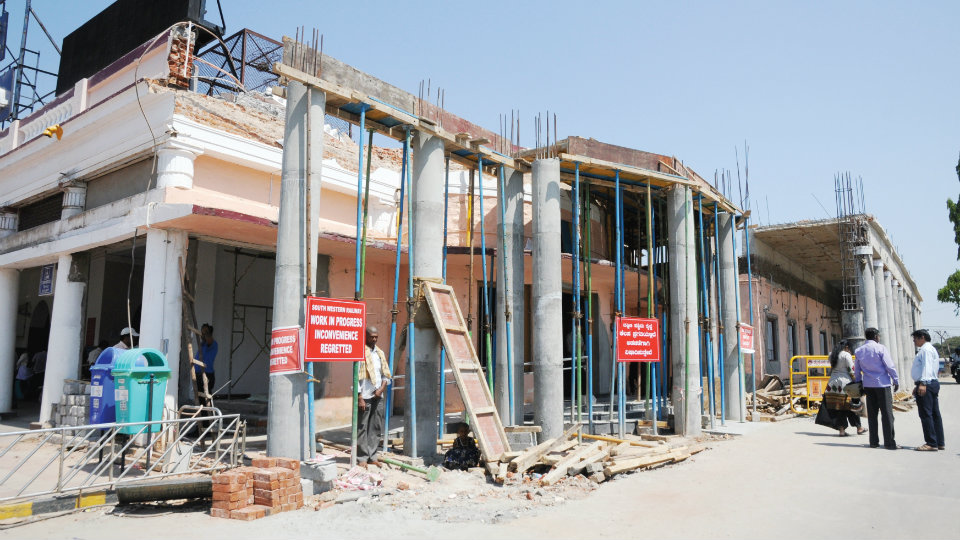 Mysuru: The controversy surrounding the refurbishment of the historical Mysuru City Railway Station received a twist this morning with the Mysuru Deputy Commissioner Abhiram G. Sankar issuing orders to immediately stop all kinds of renovation, repair and restoration works at the Railway Station, a heritage structure.

The DC’s order came at a meeting of District Heritage Committee that was held at his office this morning. Abhiram Sankar is the Chairman of the Committee and at the meeting, members raised serious objection over the move of Railways to renovate the building throwing all heritage rules into thin air.

South Western Railway’s (SWR) Mysuru Division officials have locked horns for the past few months regarding the renovation works. Despite the Heritage Committee making it clear that renovation of the heritage structure was to be undertaken only after its (Committee’s) approval, SWR authorities went ahead with the project disregarding the set norms.

Heritage Committee members told the meeting that by undertaking repair works without the Committee approval, the Railways have marred the beauty of the heritage structure that had, over the years, become a symbol of past glory. “The SWR authorities are citing some Central Act that overrides State Act and are going ahead with the works which is ultimately spoiling the beauty of the structure,” the meeting was told.

Though media was not allowed inside the meeting, sources told Star of Mysore that the Railways had cited the delay by Heritage Committee members visiting the Railway Station to approve the project as the reason for them to go ahead with the construction.

The members took serious objection to the attitude of the Railway authorities who they (Heritage Committee) said have grossly violated heritage norms. They demanded immediate stoppage of all works at the Railway Station. Taking the issue into cognisance, DC Abhiram Sankar issued orders to SWR to stop the construction works immediately.

Apart from the Railway Station works, the cracks on the historical Silver Jubilee Clock Tower or Dodda Gadiyara at Gandhi Square came up for discussion at the meeting.

Making a Power Point Presentation, officials from the Department of Archaeology and Museums said that there were certain cement patches that have fallen off from the tower’s Gopura.

Officials told the meeting that the 75-foot tall structure is safe and cracks have developed in the area where the bell is situated at the top portion. They said that as it was not possible to climb the Gopura, drones were used to circumambulate the structure and closely photograph the structure.

Listening to the presentation, the DC asked for an estimate to restore the cracks and also the technology to be used for the purpose. The Heritage Committee also decided to renovate the Jayalakshmi Vilas Palace inside the University of Mysore (UoM) campus. The Committee members told the meeting that the Palace requires urgent attention as damages and corrosion have been caused to the structure due to various factors.