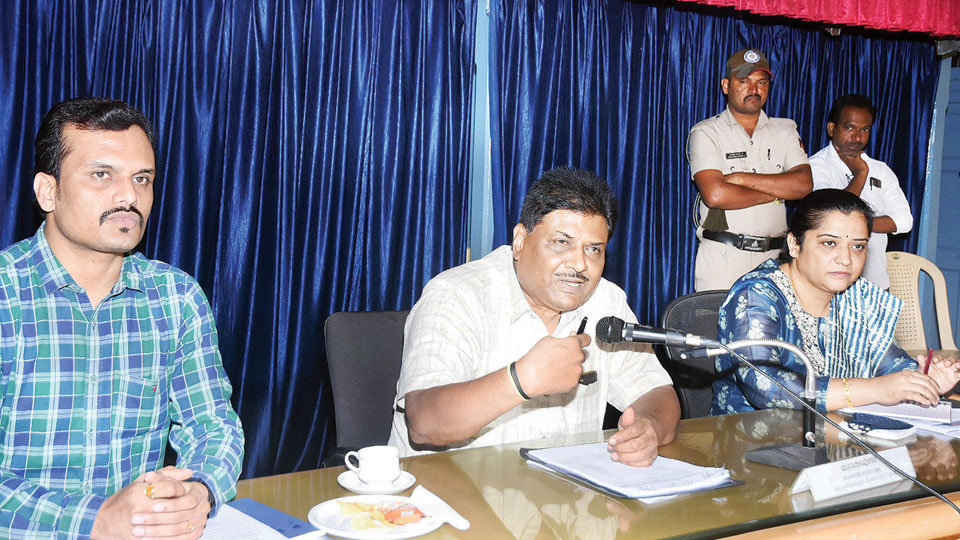 Mysore/Mysuru: Regional Commissioner (RC) Dr. G.C. Prakash, who is also the Electoral Officer, said that the filing of nomination papers for the Legislative Council elections from South Graduates Constituency will commence from tomorrow (May 19).

Addressing a press meet at his Office on Hunsur Road here yesterday, Dr. Prakash said that the polls will take place on June 13 (8 am to 4 pm) and the counting of votes will be taken up on June 15, following which the result will be announced the same day.

The filing of nomination papers will be held from May 19 to 26, he said adding that there are a total of 1,33,073  voters (Graduates)  in the Constituency which comprises the districts of Mysuru, Mandya, Hassan and Chamarajanagar.

Noting that the model code of conduct has come into effect from the date of announcement of poll schedule (May 12), Electoral Officer Dr. Prakash said there is no bar on carrying out relief works during natural disasters.

Clarifying that announcement of programmes  that may influence the voters  will not be allowed, he sought the co-operation of everyone for the conduct of a free and fair elections.

Stressing on the need for the candidates to follow the model code of conduct, he said that action will be taken against those violating the poll code and as well as other regulations in place.

READ ALSO  I lost because I failed in formulating the right poll strategy : BJP candidate Ravishankar

Also, the voter registration went on till May 16, during which more than  10,000  fresh applications were received. These applications will be considered for inclusion in the electoral rolls are per norms and hence the number of voters may ultimately increase, he said.

Stating that the voting on June 13 will take place at 130 centres across the four districts of the Constituency, he said that the age of the contestants should not be less than 30 and must be a voter of any Assembly segment of the State.

Each candidate can file four sets of nomination papers, which should have  the names and signatures  of at least 10 voters  of the South Graduates Constituency as approvers. The deposit for General category candidates is Rs.10,000 and that for SC/ST candidates is Rs.5,000.

The nomination papers can be submitted on all days from May 19 to 26 (barring May 22, being a Sunday) at the RC’s Office on Hunsur road from 11 am to 3 pm.

Scrutiny of nomination papers will take place on May 27 and the last date for withdrawal of nomination is May 30, Dr. Prakash said adding that the nomination forms can be obtained from the RC Office.

BJP leaders complained of lapses and errors in the electoral rolls that are already published. Arguing that the address of many voters are found to be either incomplete or incorrect, they said that the pamphlets sent by the party to the voters are getting returned for want of correct address. The authorities should ensure error-free electoral rolls, they said. They also  submitted a memorandum to the RC seeking to make the electoral rolls free of  errors.

The BJP leaders also complained about an independent aspirant alluring the voters with distribution of  Health Insurance and General Insurance.

The RC assured that he would look into the complaints and take appropriate action.

BSP (Bahujan Samaj Party)  aspirant  Dr. B.H. Channakeshavamurthy  contended that the voter inclusion has not been completed due to the rains that has been lashing Mysuru and other districts for the past several days.  He wanted the voter registration drive to be extended by a few more days, which was however, rejected by the RC. All the parties sought extension of closing hours of voting (4 pm) to 6 pm, so as to facilitate a higher percentage of voting.