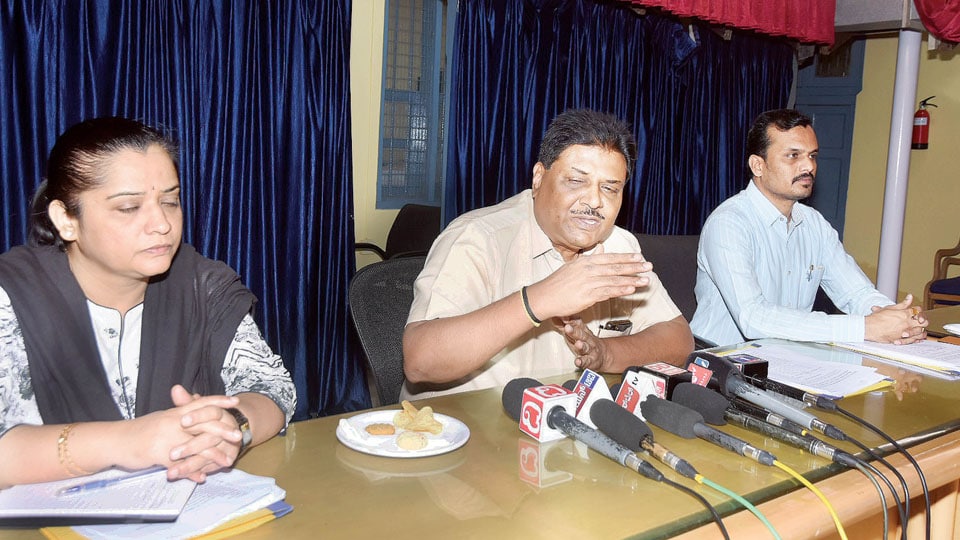 Mysore/Mysuru: Following demands from political parties, candidates and the voters alike, the Election Commission has extended the poll duration by an hour for the Legislative Council Polls from South Graduates Constituency to take place on June 13.

Addressing a press meet at his office on Hunsur road here this morning, Regional Commissioner Dr. G.C. Prakash, who is also the Electoral Officer for the polls, said that following the extension, the voting will take place from 8 am till 5 pm on June 13 (instead of 8 am to 4 pm). The Constituency which covers four Districts — Mysuru, Mandya, Hassan and Chamarajanagar — has a total of 1,41,961 voters (82,505 men, 59,432 women and 24 others).

Stating that a total of 17 hyper sensitive booths (13 in Mandya and two each in Hassan and Mysuru) have been identified in the Constituency, he said that preparations are made for webcasting of voting process in these booths.

Announcing that a total of 516 cases in connection with  poll code violations  have been registered so far, with Mysuru recording the highest number of cases (178) and Hassan the least (63), he said that the State Government has announced a special casual leave holiday on June 13 for enabling the voters to exercise their franchise. Also, 600 postal ballot papers have been dispatched to various parts of the Constituency for designated voters to cast their votes.

Stating that the public campaigning for the polls ends today (5 pm), he said that barring the candidates and voters, all outsiders are mandatorily required to leave the Constituency before the deadline for public campaigning ends.

The Electoral Officer asked the public to complain to the election authorities in case they notice any poll code violations.

The mustering for Mysuru City and Taluk will take place at the MCC Office tomorrow morning (June 12) and the same will also take place at all Taluk Headquarters of the four districts. The de-mustering will take place after polling concludes at 5 pm on June 13 at Maharani’s Women’s Commerce and Management College on Valmiki Road in city, Dr. Prakash added.

The Regional Commissioner said that counting of votes will be taken up at Maharani’s Women’s Commerce and Management College at 8 am on June 15 under tight Police security. A total of 28 tables have been arranged, he said adding that the results will be announced the same day after all rounds of counting along with preferential votes.

Dr. Prakash further said that the Election Commission has appointed senior IAS Officer Ponnuraj as the Poll Observer. Also, Micro-Observers have been appointed for every polling booth and CCTV cameras have been installed in all the 150 polling booths, he said.

Additional Regional Commissioners Roopashri and Shivaraj were present at the press meet.