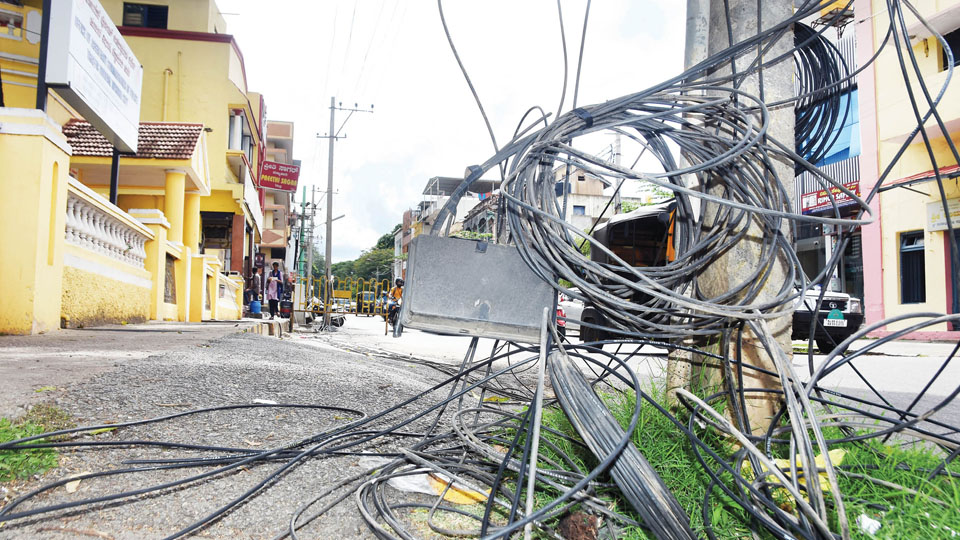 Mysore/Mysuru: In the aftermath of many accidents owing to cases of electrocution, the Chamundeshwari Electricity Supply Corporation (CESC) has speeded up the process of removal of unauthorised OFC cables and coaxial cables laid at the transformer units and electricity poles.

Officials said the removal of unauthorised cables is a continuous process but during monsoon, cases of accidents are common. In the past too, CESC has set many deadlines for cable television operators and internet service providers to pay the stipulated fee for regularisation of the unauthorised cables tied to electricity poles.

Yesterday, the operation was held in the Central Business District like D. Devaraj Urs Road, Shivarampet, Vinoba Road, Narayana Shastri Road, D. Subbaiah Road and surrounding areas. CESC officials said that notices had been issued to 49 cable operators in the city who had not paid the fee to tie cables on electricity poles. Such cables are cut as guidelines have been violated, they said.

Officials said they have received several complaints against unauthorised cables lying near electric poles which are not only dangerous but also impede the movement of pedestrians since they are found lying unattended on footpaths.

“Those working with cable TV and telecom companies have little knowledge about electricity. They tie the cables to poles improperly, not only violating rules but also compromising on safety,” CESC MD Jayavibhavaswamy told Star of Mysore.

“When they use electricity poles, they have no idea about the need to maintain a minimum distance between two live wires. If the necessary precautions are not taken while dealing with live wires, it will result in electricity accidents. If the cable operators pay the prescribed fee, our staff will not only guide them when they use the poles but will also keep a watch on their cables,” he added.

Officers said that almost every electricity pole and transformer pole in Mysuru city has cables running through. “For many years, we have been waiting for private service providers to upgrade the system and take their cables underground. They refuse to do so as they will have to seek permission from the MCC. The easy way is to tie the cables to poles,” an officer said.

CESC officers said 70 teams have been formed to disconnect unauthorised cables. With a fee of Rs. 150 per pole in urban areas and Rs. 100 in rural areas, CESC is hoping to rake in at least Rs. 50 crore as revenue.

Cable operators, taking objections to the CESC move said that they pay Rs. 150 for every pole but CESC does not have a proper mechanism to monitor the usage of its poles by cable TV operators. As their cables were being cut yesterday, several operators requested CESC for more time to pay the fee. But their appeals fell on deaf ears.