Home » Columns » Let there be grass under our tired feet ! 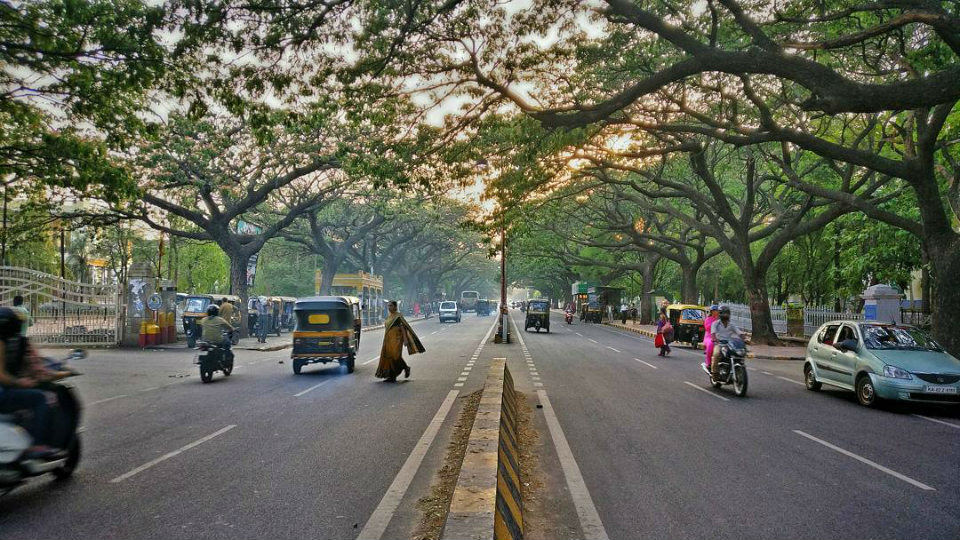 Let there be grass under our tired feet !

With our annual Dasara round the corner, our city is waking up to its usual makeover. Most noticeably, all the traffic signal lights which had either gone to sleep or even off on a trip to some unknown and far off land have started coming back to life and to their usual places. While I can understand installed signal lights ceasing to work, thanks to the lack of maintenance for which we are famous, I cannot understand why whole sets of lights at some intersections had gone missing for more than two years.

Speculations, which are always interesting and sometimes right too, are rife that they had been taken away by the agencies which were engaged to install and maintain them because of the failure of our authorities to clear their long outstanding bills! This is very likely to be true considering the fact that we regularly get to read reports of the property of many government offices being seized under court orders for non-payment of bills to contractors or the compensation that is due to citizens for various reasons.

Along with bad roads, non-functioning traffic lights are a real disgrace to the image of our city because they are the most noticeable inconveniences to many tourists who flock to our city. While roads are being patched up in a hurry as usual many footpaths are being laid with interlocking cement blocks. While this is a good thing to have in places where pedestrian movement is heavy it is completely unnecessary in most other areas where this work is now being done. In addition to being a needless drain on taxpayers’ money, this obliterates the wide grassy sidewalks which were the hallmarks of aesthetic planning in the past and are still necessary to preserve the beauty of our city which boasts of a royal heritage.

A quaint road which is fast losing its original old-time charm both due to the apathy of citizens and the unnecessary interference of our civic authorities is the almost mile-long Krishnaraja Boulevard that passes in front of some of our most historic buildings like the Oriental Institute, Mysore University along with its two constituent colleges and the Law Courts. Its wide grassy median which hitherto resembled many similar road medians in cities like Paris and Vienna is now being dug up to be armoured with cement blocks. Many readers have pointed out this outrage in their letters to the editor of SOM but there is no sign whatsoever of the authorities waking up from their slumber of insensitivity despite this road being armed with a heritage tag that is supposed to protect its beauty from any kind of disfigurement. We have only one such road in our city and we are all set to lose it very soon if we do not protect it now.

Two other places where hard, grey, cement is replacing soft, green, grass unnecessarily is the stretch of the KRS road that passes in front of the Railway Officers’ Quarters and its parallel that passes between the CFTRI and the Cheluvamba Park. These two stretches which hardly have any pedestrian movement and which were in every way the best stretches to have a wide grassy knoll in a very beautiful portion of the city are actually being vandalised in the name of beautification. The madness of replacing grass with cement is becoming so rampant that in most of our parks earthen walkways are being paved with cement blocks. Perhaps unknown to their insensitive perpetrators it is a real pain for people to walk on their hard surface as compared to the joy of walking on good old soil.

Thankfully, bowing to public protest, cement block laying was stopped midway in the Cheluvamba Park which is frequented by many regular morning and evening walkers who come there from far and near. Because they know the difference between walking on a hard surface and a soft surface they all avoid the paved inner track and stick to the unpaved outer track there. It is a well-known fact that all our cities are being deprived of groundwater, thanks to its over-exploitation mingled with a sharp decline in rainfall.

Almost all the open wells which used to have water in them all through the year, come rain or shine, are now completely dry. The ground water has receded so much that even the deepest of the deep bore-wells in most parts of the city are unable to withstand prolonged pumping and are able to cough up water only intermittently. Very strangely our authorities on one hand urge citizens, who build houses and commercial complexes, to incorporate rain-water harvesting to save water and also leave open spaces for percolation of rainwater to recharge our groundwater, on the other hand they are themselves hell-bent on sealing all our sidewalks which are the most important and undisputedly the largest spaces that are capable of soaking up rainwater which makes a mockery of their common sense!

Instead of trying to do good by doing everything that is bad, it is better if they clear all our sidewalks and footpaths of all hazardous impediments and provide proper lighting to make all our roads safe. Right now the stretch of Bengaluru road that passes in front of the Bannimantap Grounds and also the Old Bangalore road running behind the St. Philomena’s College are being widened and also paved with cement blocks at great expense. But no one seems to have noticed that both these roads right from their origin at the Columbia Asia Hospital right up to their confluence at the Tipu Circle are pitch dark and are therefore very dangerous zones at night simply because the street lighting all along is completely non-functional due to poor upkeep. Because these two roads are the ones taken by a majority of visitors and tourists who come to our city should it not be our priority to see that they give a very cheerful and happy picture of our civic sense?

It has been announced yesterday that Infosys is being roped in as a partner to develop and maintain the Millennium Circle near Bannimantap. This seems like a good idea considering the fact that this techno-giant has demonstrated a good sense of eco-friendly aesthetics in all its facilities across the country. I hope someone at the helm of this project decides to develop this triangular island of open space as a living example of how nature should be preserved and nurtured in the midst of a bustling city!