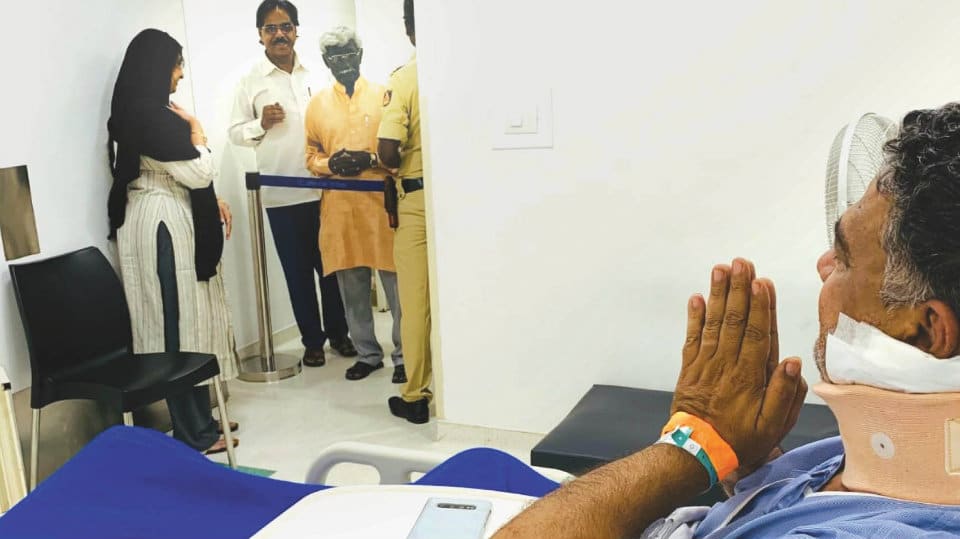 Mysuru: MLA Tanveer Sait, who was undergoing treatment at Columbia Asia Hospital since Nov.17 following the murderous attack on him, has been discharged from the Hospital last night.

The severely injured Sait had undergone surgeries in the hospital and was being treated in an Intensive Care Unit (ICU) before being shifted to a ward following improvement in his heath condition.

As the MLA had recovered, he was discharged from the Hospital yesterday (Monday) night, said Dr. Upendra Shenoy, Chief of Columbia Asia Hospital, Mysuru.

Tanveer Sait, after being discharged from the hospital, has left for his house in Bengaluru for rest, according to sources.

Police have taken three more suspects into custody for questioning yesterday morning, it  is learnt.

The Police have already arrested six persons including the prime accused Farhan Pasha out of which five have been remanded to judicial custody and Farhan is in Police custody where he is being interrogated.

Meanwhile, the Special Investigation Team (SIT), which was formed to probe the incident, has formed two sub teams led by two Inspectors. While one team has gone to Kottayam in Kerala, the other team has gone to Coimbatore in Tamil Nadu, where they have stayed put for investigation, according to sources.

Accused Farhan Pasha of Ghousianagar, who attacked Sait with a cleaver, was arrested on the same day and the Police based on the call records of Farhan’s mobile number came to know that Farhan was in constant touch with six persons who are absconding. Based on the tower locations, the two SIT sub teams are investigating in the neighbouring States, sources added.

READ ALSO  Police have failed to unearth plot behind brutal assault on me: MLA Tanveer Sait

The Police, who intensively grilled accused Farhan, have traced five persons including Abid Pasha and Munawar and arrested them. During interrogation, the Police came to know that there was a gang behind the attack on Sait besides recording their statements pertaining to the reason behind the attack, the plan and who were all involved in it.

The Police, who managed to get the mobile phone numbers from those arrested, have begun their investigations based on the tower location and have launched a hunt to nab them.

City Crime Branch (CCB) Assistant Commissioner of Police (ACP) Mariyappa, Inspector Raju and SIT Police, with the help of Tamil Nadu and Kerala local Police, have begun a search operation to trace and nab the suspects with whom Farhan was in touch, it is learnt.

Farhan, who is in Police custody, will be produced before the Magistrate on Nov.30 and the Police will seek his custody for six more days, sources said and added that Police security to Sait’s house in Udayagiri and at vantage points in Mandi, Narasimharaja, Udayagiri and Nazarbad Police limits has been continued.