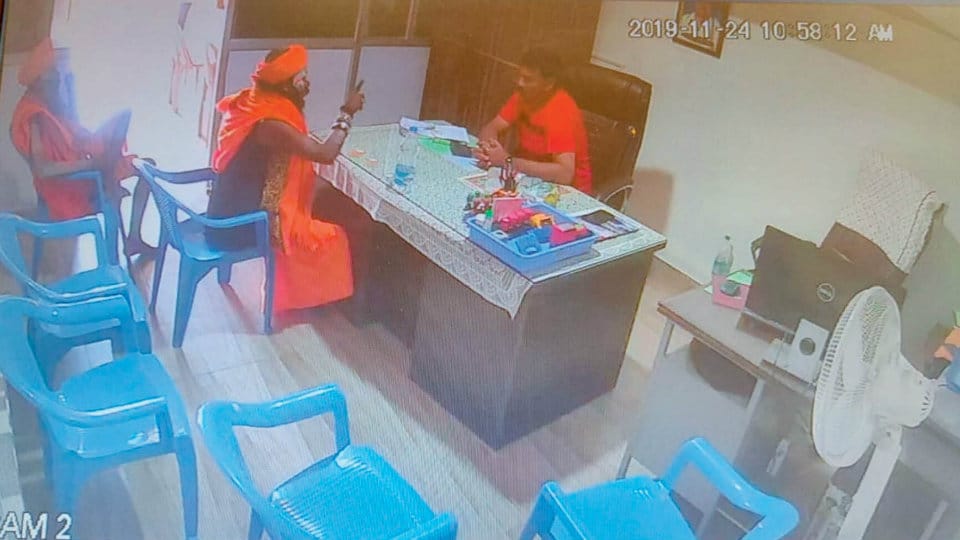 Kushalnagar: Two persons dressed in saffron robes and claiming to be Naga Sadhus from the Himalayas, have allegedly duped a private finance company Manager and have made away with Rs.1,000 cash and a mobile phone worth about Rs.20,000 on Sunday morning.

The person who was duped is Nagegowda, Manager of Janashree Finance on IB Road in Kushalnagar.

Though it was a Sunday, Nagegowda had come to the office as he had some work. At about 10.50 am, two persons in saffron robes came inside the office and introduced themselves as Naga Sadhus from the Himalayas and told Nagegowda that they were staying near Chamundi Hill in Mysuru and gave him (Nagegowda) saffron colour vibhuti and asked Nagegowda to smell it.

When Nagegowda smelled the vibhuti, he seemed to be hypnotised and began to listen whatever the Sadhus told him. The Sadhus then asked Nagegowda to give them money for food following which Nagegowda opens the drawer and the Sadhus take out a bundle of currency notes in Rs.10 and Rs.20 denomination totalling Rs.1,000.

One of the Sadhus, then puts his hand to remove the gold chain which Nagegowda was wearing during which Nagegowda’s friend Nagesh comes to the office. The Sadhu then takes back his hand and opposes the presence of Nagesh. But Nagesh comes inside the office and after sitting on the chair for about 10 minutes goes away.

The Sadhus then ask Nagegowda to hand over his mobile phone and he (Nagegowda) hands over his Samsung mobile phone worth about Rs.20,000 to the Sadhus after removing the SIM card. The Sadhus then take out a 2 ft. long dagger and gave it to Nagegowda asking him to take it around the office saying that he would become the owner of the company if he does it.

Nagegowda, after taking the dagger around the office, hands it over to one of the Sadhus, who then inserted the dagger in his throat and blesses Nagegowda. The Sadhus then leave the office and Nagegowda too goes back.

Nagegowda, who claims that he became normal yesterday morning, said that he does not know what happened after smelling the vibhuti. As his phone was not with him, Nagegowda, thinking that he had left the phone in the office, goes to the office and searched for his mobile phone and did not find it. He then checked the CCTV footage and claimed that it was only after checking the footage, he came to know what had happened. Nagegowda said that he would lodge a complaint with the Police.

Meanwhile, it has come to light that the Sadhus had come in a white colour Mahindra Bolero vehicle which was seen in Kushalnagar surroundings since two days.