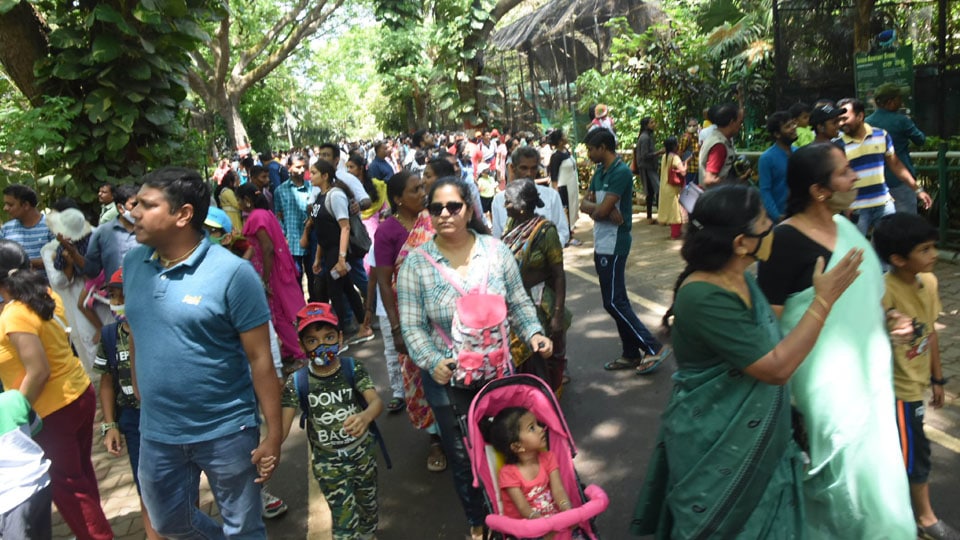 Very recently our State Health Minister and the Deputy Commissioner of Mysuru District have called upon citizens to continue to use masks, despite the Government withdrawing the official order that made their use mandatory in all public places. This tiny bit of advice should be followed with a little seriousness which most citizens do not seem to be doing now.

Although they have only spoken of face masks, their advice should also be interpreted as an appeal to continue to observe all other Covid precautions too, for some more time, which I feel would be a most sensible approach, if we have to remain safe till the pandemic is completely wiped out from every nook and corner of the country and even the world.

It was only the early abandonment of these precautions with a sense of elation, after the first wave just seemed to be abating, which certainly caused the lethal second wave to wreak havoc across the world. And, like the utterly helpless spectators or sufferers that we were, we saw and experienced the horrors of the most devastating pestilence that three generations of humanity saw for the first time              in their lives.

It left no corner of the world untouched, and unaffected, except perhaps for the most isolated, island-dwelling inhabitants who were completely isolated from civilisation and the rest of humanity. The mutation of the virus into its more lethal Delta variant was actually one of the lesser reasons for its spread. It was our complacence and carelessness that played the bigger role.

And, sadly, it was only after we gave it a chance to spread and take hold, that we realised how lethal it was and started lamenting and grieving over our sufferings and losses. Even as the first wave was still waning, people started celebrating not only its departure but also all their weddings, conventions, social, political and religious gatherings which they had been forced to put on hold, in what seemed like wanton acts of vengeance, at having been denied their freedom to do so over just half a year!

We clearly saw instances where there were angry and even violent protests demanding that Governments withdraw all their Covid restrictions. And, we also clearly saw many instances where Governments did yield to these demands rather prematurely, with disastrous outcomes. This was the case not just in our country but all over the world, wherever democracy gave people the freedom to take to the streets and protest. It has been rightly said long ago, that though democracy is the best form of Government, it is still not the most ideal one!

Now, before someone can point it out, let me admit that to suit my need here, I have no doubt twisted this quote just a little bit but I have done that without taking away its essence. And, now that I have confessed to my tampering with it, I am very sure that most of you will Google to check what its original form is and who first said it!

Coming back to the present, with the perceptible drop in Covid cases, we can clearly see that already there is hectic activity all around us, with people poised to head to every place of tourist importance, big or small. This has very aptly been called ‘Revenge Tourism’ by some clever person.

With the holiday season all set to begin immediately after the examinations are over, hotels and resorts are all over booked and we are very likely to see a heavy rush of people everywhere. And, because all is fair in love and war and in a crowd too, people are most certainly going to throw all caution to the winds in a bid to have a good time, after what seems like a very long time!

But becoming a part of all this frenzied enthusiasm is not a very good or safe idea. It pays to tread a little more cautiously. Although Omicron did not do all that we feared that it would do, it was just plain good luck that it had a genetic make up that did not make it as lethal as its two forerunners. It is good to keep in mind that the lethality of viruses can head either way and there is just no way of forecasting the direction it can take with every new strain and every new wave.

READ ALSO  Save Kodagu from over-tourism

So, it makes perfect sense if we all expect the worst and continue to remain extremely cautious for a couple of years more, till the pandemic merges into history. And, thankfully, from what we have been observing, that stage is not likely to be very far, which should be a reason for us to feel happy but without yet congregating to celebrate! There is some strong scientific evidence that indicates that the vaccination that was undertaken all over the world helped to a great extent in containing both the march and the severity of the pandemic.

In addition, the booster doses that our elderly people took, also seemed to have done much good to them. Some of the slightly more wary ones amongst us may continue to be ridiculed for not shaking hands or honouring every invitation and showing up at every social event. But please take my word, it is good to be careful for some more time. Such people are the ones who are actually doing a service to society and humanity by being the broken links in the chain of the spread of the pandemic and I’m glad that I’m with them!

5 COMMENTS ON THIS POST To “Let’s not re-invite covid with ‘Revenge’ Tourism!”