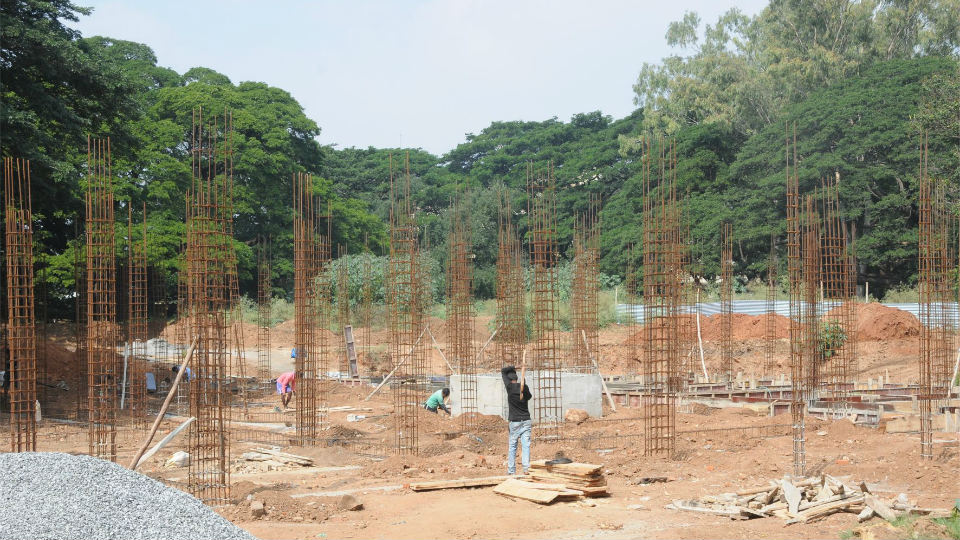 Mysuru: Even as the NGO Mysore Grahakara Parishat (MGP) is struggling to find a public spirited lawyer to file a Public Interest Litigation (PIL) in the High Court to stop the construction of Public Library in park, the works on the Rs. 4.99 crore worth library building has already begun at the People’s Park in Nazarbad.

The Mysuru City Central Library opposite the K.R. Hospital is very small and more than 100 years old. In this background, the Karnataka State Library Authority had drawn a plan in 2011-12 itself for a new library building.

Earlier to that in 1979 itself, the Mysore City Corporation (MCC) had decided to hand-over a 400X340 feet site in People’s Park for the construction of a library.

The order was passed in 1980 in this regard and in 1984 through a gift deed the site was handed over to the Public Libraries Department.

However, due to a few technical glitches and the opposition from the environmentalists and MGP the construction work was delayed.

The works on the ground and first floor on a 115X121 feet floor area at a cost of Rs.4.99 crore has begun. Another revised plan has been given. Karnataka Rural Infrastructure Development Corporation (KRDIC) has been entrusted with the construction works. The government has already released Rs. 4.25 crore and the MCC will pay the remaining amount.

Lack of space: In the present Central Library building there is lack of space and the number of readers growing by the day. One more problem is that the building is very old and weak and parking and toilet problems have cropped up. It is hoped that the new building in People’s Park will ease all these problems.

A blue print of the library building.

Shankarlingegowda’s voice: Former MLA late H.S. Shankarlingegowda had raised his voice for the construction of the new library building at the Park. He had waged a single-handed battle in the Assembly before the Assurance Committee demanding for the library.

All clearances taken: Deputy Director of City Central Library, Dr. B. Manjunath speaking to Star of Mysore said that all precautions and permissions had been taken from the departments concerned like the MCC and MUDA for construction of the library building at People’s Park. Even the Heritage Committee headed by the Deputy Commissioner (DC) had given its nod.

The construction work on the new library building as part of the centenary celebration of City Central Library has begun. We will try to complete the work in one year. It will be very useful to the readers.

A caveat has already been filed in the Court to see that the construction work is not stopped. “The government has already released Rs. 4.25 crore and the work will be completed in one-and-a-half years. It will have a heritage look and the project has been handed over to KRIDC. No one can bring a stay as we have already filed a caveat,” he said.

Meanwhile, Founder-President of MGP Bhamy V. Shenoy who is spearheading the agitation against the construction of the library in the People’s Park speaking to SOM said, “Unfortunately right now we are not able to find a public spirited lawyer to fight for the cause. Once we find a lawyer, we are going to file a PIL in the High Court. The Government is violating all the laws by beginning the construction. We will see that it is demolished even if the building is constructed or will not allow it to function.”

Shenoy expressed his anguish about the way the local MLA backed out after promising support for the cause.

He said that it was a clear violation of Karnataka Parks, Playgrounds, Open Spaces (Conservation and Regulation) Act, 1985.