Home » Columns » Listen to your heart and decide 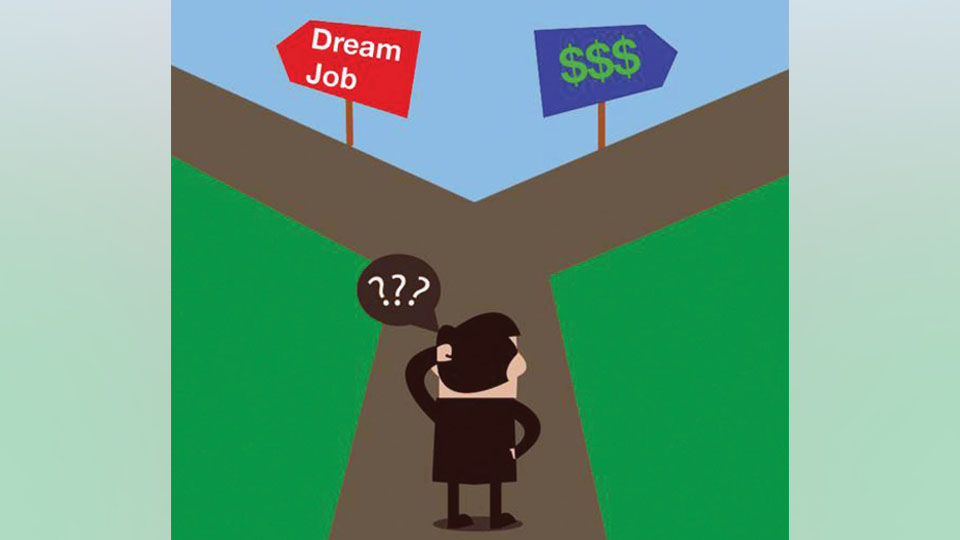 Listen to your heart and decide

A simple story narrated by Gopal Das: A vegetable vendor put up a board near his cart, “Fresh vegetables sold here” to attract new customers to his cart.

A man came up to him and said, we have seen you sell vegetables and most of the times it is fresh; so why have you put up a board saying “fresh”? Why do you require this advertisement? Rub off the word, “fresh” from the board. The vendor did so leaving the words “vegetables sold here” on the board.

After some time another man came up and said, arre bhai, we know you are selling vegetables and not fruits; so why have the word “vegetables” in your board? Please wipe off the word vegetable. The vendor complied.

Left on the board now were two words “sold here.”

After some time an elderly lady approached him and said, if your are sitting in the market, are you giving vegetables for free?  Take off that word “sold” from the board. The vendor did so.

The white board now had only one word left “here.”

A school boy passing by teased the vendor saying “everyone in the world knows you are sitting here. And not there, why have the word “here” put up in the board ?”  The vegetable vendor erased the last word from the board. The board was now clean and empty.

Another person then came up and said, “only a stupid man would keep such a nice board empty. Why don’t you write something on that to advertise your vegetables or a special deal of the day ?”

READ ALSO  How did Bjp manage to lose Karnataka?

In the noise of others suggestions and opinions, do not lose your voice. Take good advice, but learn the art of sifting the chaff from the grain to ensure that you ultimately follow your own heart.

A simple story, but the real truth. In India, at least every one is an expert in everything. In the eighties I was posted at Calcutta and in the evening sometimes I used to drop in at a small eatery nearby the hotel to take some samosas or singhadas as called in Calcutta homes.  The shop had put up some benches in the front for people to sit and have their tea. One day I watched with amazement a man talking animatedly on the foreign policy of the Prime Minister. Curious, I also sat down and heard him out. Later I asked another man sitting next to me as to who was the gentleman giving the discourse.  He laughed and told me, “Sir, he is a peon working in a small company nearby. A peon giving  lecture on the foreign policy of our Prime Minister!”

One of the prime reasons the work gets stuck in the government offices is the notings on each files. Pages and pages of notings are put up on the files by all and sundry starting from the lowest to the highest. Every body has an opinion and tries to justify that his opinion is right. With such varied opinions, it becomes tough for the top executive to take a decision.  So what do they do? He in turn forms a committee to give a recommendation. When the committee gives a recommendation, the top executive approves the file  writing “approved as recommended.” Collective responsibility.  The smallest of a file going to a Minister for approval will have at least 25 signatures.

That is the reason most of the Ministers always keep an osd Rank  Officer [an IAS  Officer from their home State] exclusively to check all the files and put up a small hand written note on the file giving the brief.

Indians by nature are very curious. You are standing inside a temple. Someone will come and ask, “temple ge bandidira ?”  How to react to such a comment.  A smile and nothing more. A relative of mine from abroad had come to India for holiday. She had a hearing problem and so had put up a small hearing aid. She got sick of every Tom, Dick and Harry including shop-keepers asking as to how she got the problem and some even asking her how much this hearing aid cost? You walk into a party with a  sling. You may have to repeat your story of the accident to at least a dozen guests in the party. Advices then follow. It is worse for a young girl who becomes pregnant. What to eat, what to wear, the advice list is endless. In India, everyone is an expert doctor and very liberal in advice too.

In my neighbourhood, we have a chemist shop where large number of patients come without any prescription from doctors but straight away ask the chemist about their ailment and she happily dispenses medicines.  Win-win situation.  The patient has saved on the doctors fee and the chemist her extra sale.

On a lighter note, I used to wonder, as to why youngsters used to vanish or quietly slip away, when approached by me. I asked my wife about this and she laughed and told me: “They are all scared of your advices. I have no choice but to bear it day in and day out but they do not.” Then I realised that I too have become a typical Indian senior citizen,  free advice-giver!

So to summarise, one cannot avoid getting sermons and advices.  Listen to all but do what your own heart asks you to do. Take your own decisions so that you alone are responsible for the decisions and not somebody else.