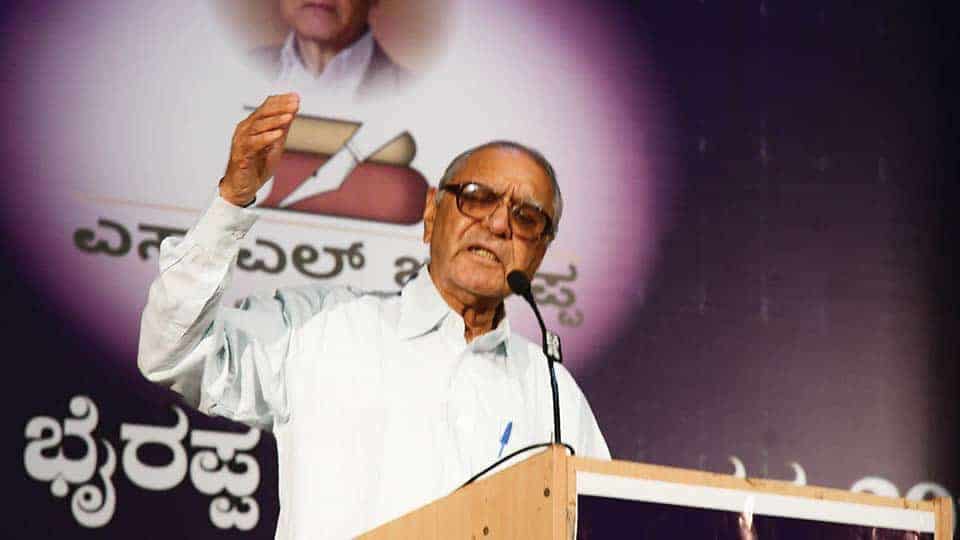 Mysuru: Saraswati Samman Awardee Dr. S.L. Bhyrappa said that if beef is banned, then the consumption of other meats must also be prohibited. “No animal must be treated in a cruel manner,” he added.

At the valedictory of S.L. Bhyrappa Sahityotsava, Dr. Bhyrappa said that concepts of vegetarianism and non-vegetarianism were derived from Jainism through which these ideas entered our society.

“In the West, the existence of animals is presumed to exist for the consumption of human beings. But in India, we look at animals as having souls and prana (life). All animals feel pain. They feel joy, as much as they feel pain. That is why I advocate the rejection of non-vegetarianism,” he said.

Dr. Bhyrappa said that literary works cannot provide solutions to society’s problems. “People do not read literature to find answers to problems nor should they expect them. I confronted these ideological challenges when I began writing ‘Tabbaliyu Neenade Magane’ and I was aware of the conflict between vegetarianism and non-vegetarianism. Since all Indian religions believe in reincarnation and we believe that souls of our ancestors could manifest in different forms, including animals. Hence, they should not be consumed,” he said.

Talking at length on the criticism of his writings, the Saraswathi Samman winner said it was his strong foundation in philosophy, arts and aesthetics that helped him stand his ground against the onslaught of such criticism. Taking a dig at those describing themselves as Communist writers, Bhyrappa said, “I have seen many of them perform homas and yagnas at home.” Calling on writers to stay away from political and social movements, he added, “In a way, even my critics are responsible for my growth.”

Playwright and critic Nand Kishore Acharya from Rajasthan termed the literature as the process to digest wisdom. “It is the way to explore the freedom,” he said. “Novels should touch empathy. Bhyrappa’s ‘Sakshi’ and ‘Parva’ touch readers’ empathy. Description of even minor aspects in his novel is so complete in nature that the narration of rural life of any village in Karnataka becomes the narration of rural India,” he added.

“Through his creative writing, Bhyrappa has secured a special place for himself in modern Indian literature,” Acharya said. “There is massive crowd in this hall due to affection and respect for Bhyrappa. I haven’t seen these many people even for celebrated Hindi writers,” he said.

Lamenting the lack of works in Hindi that reflect the socio-political problems plaguing society, Acharya said, “Bhyrappa has discussed these issues in depth in his novels. Writers who acquire knowledge through reading must share it with their readers through their books,” he added.