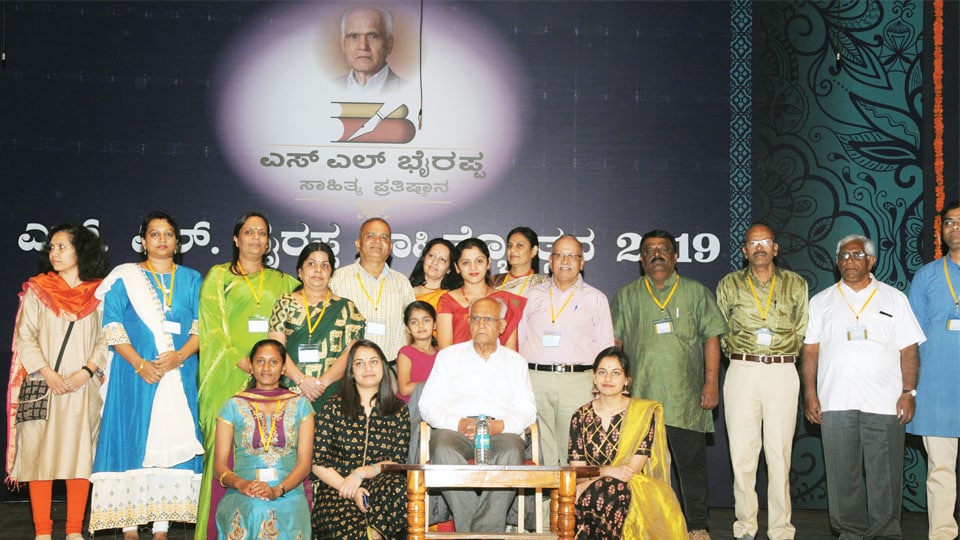 Sahityotsava has inspired me to indulge in further creations: Says Dr. S.L. Bhyrappa

Mysuru: “I don’t think protest literature or literature of protest (refers to works that address to real socio-political issues and express objection against them) can usher in a change in the society and I don’t have faith in that sort of literature,” said Saraswati Samman Awardee Dr. Santeshivara Lingannaiah (S.L.) Bhyrappa. He added that protest literature acts as a supplement for political intentions.

“The concept of protest literature has dominated the literary scene these days. I only have faith in purest forms of literature that is beyond any forms of influence. It is unfortunate that many people are not aware of real literature amidst the clamour of slogan literature,” he said.

“Pure literature cannot be influenced and it has its own place. Protest literature is created based on the social and political milieu of a particular region or country. When I started writing, Navya movement began and for Navya writers, a littérateur must also be a critic. Before they publish a book, they used to write reviews in newspapers and magazines and they knew well how to suppress other writers by projecting their own works. In this scenario, how can real literature thrive,” Dr. Bhyrappa asked.

After Navya movement, progressive literature, rebel literature, Dalit literature and feminist writings took birth and they began to dictate terms and conditions to writers as they wanted literature to be in accordance to their directives, he said. Many promising writers could not withstand the onslaught of these movements, he opined.

Beyond any sort of influence

“A littérateur must be beyond any sort of influence and he must stay away from social and political activities and he must focus on his writings. It was possible for me to write so many books as I stayed away from such movements,” Dr. Bhyrappa revealed.

“In Kannada, literary writers are divided on the basis of ideologies like Marxism, existentialism, feminism, the Dalit movement, the OBC movement, etc. Also, there are readers who follow these ideologies, which are not exclusive to each other, depending upon the political exigencies. Two or more ideologies make temporary alliances as it happens today in Indian politics. There are a few writers like me who strictly believe in pure literary goals. They transcend contemporary ideologies,” he explained.

“Selection of the subject is important for the writer. A writer should choose roots of the subject which is universal in nature. Weaving literature around the subject ensures longevity. I realised this during early years of my career as a writer. This understanding has given the touch of longevity to my creations. This is why readers throng for my novels,” he said.

“Writers who were active in social and political movements formed groups. Many budding writers lacked courage to face those groups. I started writing during those days of turmoil,” he said. “In 1973, my book ‘Daatu’ was released and till date, no literary work has been able to match my work. The two-day event has provoked me. Any artist will be provoked to indulge in further creations if he realises that people have liked his works of art,” he added.

Dwelling further on his books, Bhyrappa mentioned about his work ‘Sakshi’ where one modern poet had commented why Bhyrappa writes about sex though he (Bhyrappa) is old. “It is unfortunate that the poet has spoken against a fellow littérateur without understanding the context and the thoughts behind the writings,” Bhyrappa remarked. “My two works ‘Mandra’ and ‘Parva’ have brought me immense satisfaction. A writer must not boast about his own writings and his literary works must display his writing skills,” he opined.

Volunteers: The volunteers for this mega event, who were in the age group of 20 to 70 years, came from a diverse group of academicians, software professionals, agriculturists, Indologists, retired professionals, businessmen, students, Doctors, budding Architects, editors and journalists. They were all bound by the common thread of love for pure Kannada literature and especially Dr. S.L. Bhyrappa’s literature.