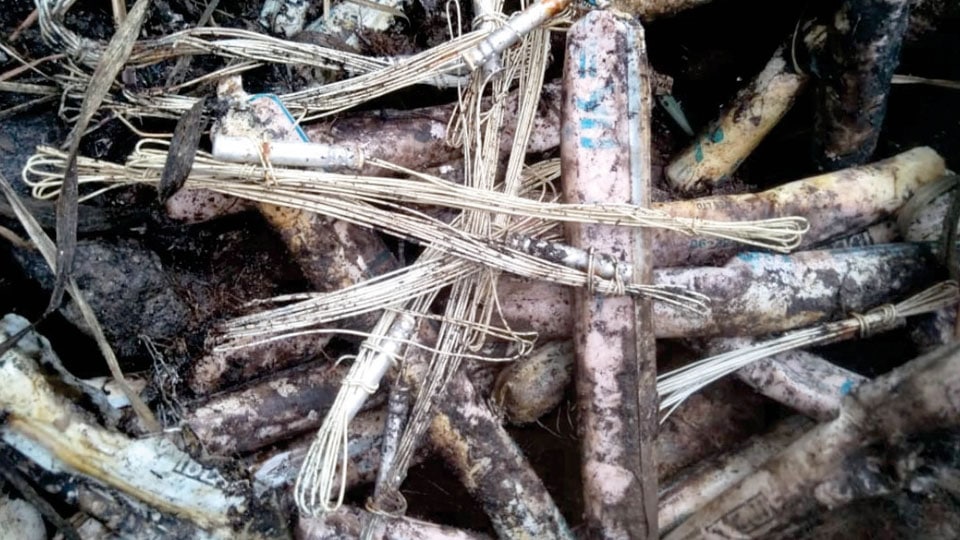 Srirangapatna: Memories of a deadly dynamite blast, claiming at least six lives of those trying to dispose of gelatin sticks fearing Police search at a quarry site in Herenagaveli village of Chikkaballapura taluk in February this year, returned to haunt on Thursday at Bebi Betta in Pandavapura when a huge cache of live gelatin sticks were found carelessly disposed off.

Over 40 gelatin sticks (gelignite, also known as blasting gelatin), detonators and wires were found on Thursday near a quarry on Bebi Betta that was in the news three days back after Mandya MP Sumalatha Ambarish visited certain quarries to inspect any illegal mining activity in the area. She has claimed that illegal stone mining is causing damage to the structure of Krishna Raja Sagar (KRS) Dam.

Local shepherds and villagers, who discovered the abandoned explosives, shot the videos and photos and circulated in social media and also to newspaper offices. The gelatin sticks and wires are covered in mud due to rain. They said that the explosives were found discarded next to a quarry hours before the MP visited the quarries. However, it is yet to be ascertained under whose ownership the quarry operates and as to why the  gelatin sticks were dumped.

Following a threat to the safety of the KRS Dam, the Mandya District Administration has banned mining in Survey Number 1 of Bebi Betta. Locals allege that the gelatin sticks were hidden near the bovine grazing land to carry out blasting during the night. They said that despite the ban they often hear loud blasting sound from some of the quarry sites.

Gelatin sticks are cheap explosive materials used by industries for the purpose of mining and construction related work, like building structures, roads, rails and tunnels etc. They cannot be used without a detonator. If the blast must be carried out, timers are used and a power source of a 9-watt battery is given and link it to the timer to remote-control the blast.

Though gelatin sticks are strictly monitored at all quarry sites to check any illegal stocks, there have been many cases where blasts have occurred while transporting them for disposal. As per rules of Petroleum and Explosives Safety Organisation (PESO), all gelatin sticks will have a barcode on the packet with which it can be traced or the place where it was bought from. However, loose cartridges are not yet barcoded.