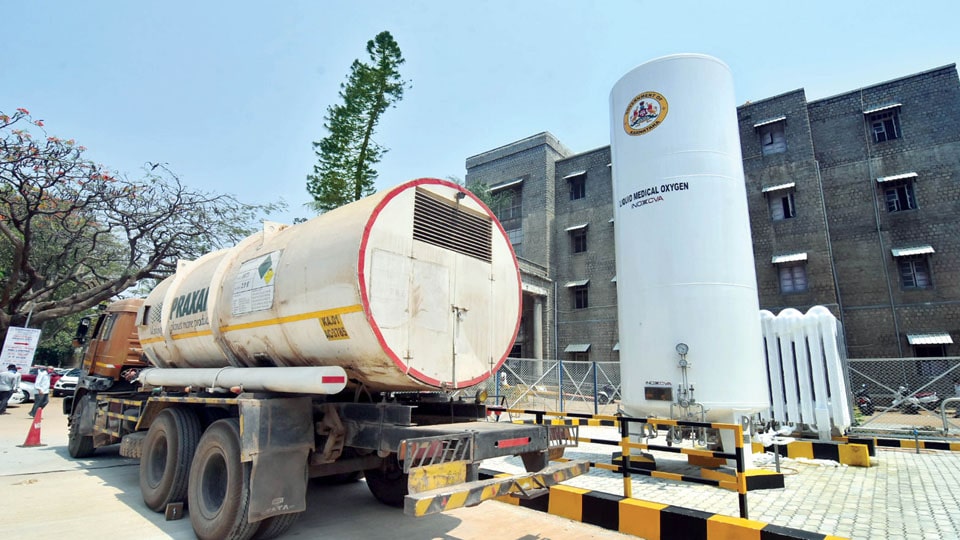 Bengaluru: Having understood the importance of oxygen during the second wave of COVID-19 pandemic, the State Government has announced a scheme that will provide special incentives for medical oxygen manufacturing units in the State.

Briefing reporters after the Cabinet meeting held at Vidhana Soudha here on Thursday, Law and Parliamentary Affairs Minister Basavaraj Bommai said that the scheme which will give a 25 percent capital subsidy on the value of fixed assets, subject to Rs. 10 crore minimum investment to set up medical oxygen plants. There will be a 100 percent exemption from electricity duty for three years after commencement of commercial production, additional power tariff subsidy of Rs. 1,000 per metric tonne on supply to the Government.

The Minister said that at present, the State has only nine oxygen plants with a manufacturing capacity of 815 MT and a storage capacity of 5,780 MT. To increase the capacity, if entrepreneurs come forward, the Government will give them incentives.

During the second wave of the COVID-19 pandemic in April-May, the State needed 830 MT of oxygen per day of which Bengaluru city alone required 285 MT. When cases had peaked, Karnataka was allocated 1,200 MT of oxygen supply, following the intervention of the High Court.

However, it managed to get only around 850 MT on a daily basis from suppliers within the State. Before the intervention of the High Court, 765 MT of oxygen was allotted to hospitals by the State Government, with 252 MT reserved for Bengaluru.

Bommai said that the State Cabinet also decided to hold a ‘Global Investors’ Meet’ at the Palace Grounds in Bengaluru from Feb. 9 to 11 next year.

He said that the Cabinet approved setting up of goshalas or cow shelters in all districts as part of the Anti-Cattle Slaughter Law. In the first phase, an amount of Rs. 15 crore will be earmarked for the project which will be increased in subsequent phases.

In February, when the Karnataka Prevention of Slaughter and Preservation of Cattle Bill-2020 was passed amid huge commotion and opposition in the Upper House of the State Legislature, Bommai had stated that the Government will increase capacity of its existing 184 cattle shelters from around 50,000 currently to 2,00,000.

More such schemes will be announced in the upcoming Budget that takes away the burden of maintaining non-milching and other cattle.

The Cabinet also approved releasing 139 convicts for their good conduct from various prisons in the State.