Home » Feature Articles » Living for and through Lavani 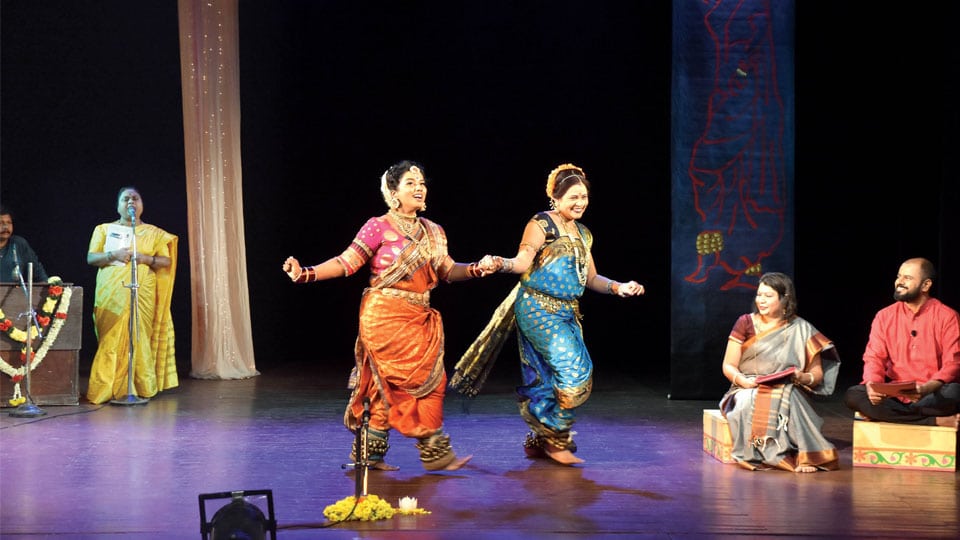 Living for and through Lavani

For the men seated in the Bhoomigeeta theatre at Rangayana on Sunday evening, at the ‘Sangeet Bari’ show, held as part of Bahuroopi-2020 National Theatre Festival, it was a delectable evening indeed!

While the young whistled and hooted, the old twitched, turned, blushed, smiled and gasped as the warm memories of their youthful days gushed by.

The impish flicker of the eyes, the flirtatious crooning, the subtle and not so subtle gestures, the graceful hatkas, the sweet blown kisses and the tempting invites had the ecstatic audience, both men and women, eating out of the hands of the performers! The men these women chose to lavish their attention upon became instant paramours, with spontaneous lovable gestures that added to the show’s ephemeral quality.

No! This isn’t yet another of those item numbers or sleazy shows! Welcome to the world of  the ‘Sangeet Bari,’ a unique show conceptualised to enthral the viewers with an unexplored faction of the Maharashtrian folk dance — ‘Lavani,’ the widely prevalent, sub-culture of traditional singers and dancers in Maharashtra, who perform only at private gatherings.

As the ever so graceful, Akanksha Kadam, Pushpa Satarkar and Shakuntalabai Nagarkar, gliding and moving around the stage with a pair of ghungroos weighing four kg, cast a spell in their colourful, bejewelled attires with their come hither signals, the sootradhars introduced the audience to the real Lavani, which was unlike some glimpses seen in Bollywood movies or a few reality shows. It wouldn’t be wrong to say these shows crackle with raw sensuous energy and excitement, yet graceful. From the traditional veil lifting to raunchy moves, to enactment of songs with a message, the artistes had the audience ready to flirt along, asking for more.

Lavani as they say is about how your eyes speak. The dancer  can make you feel very special by singling you out with that just one flirty look.

Sangeet Bari is a theatre production which combines multiple narratives such as the Lavani woman, the musicians, the customer and the researcher / narrator. It also includes live Lavani performance of old traditional Lavani which are either unknown or forgotten.

The show staged at Bhoomigeeta here on Sunday is a result of many years of research put in by Savitri Medhatul and Bhushan Korgaonkar on this traditional dance form, the roots of which can be traced back to as early as the 12th century. In 2009, they did a documentary titled ‘Natale Tumchya Saathi — Behind the Adorned Veil,’  on the lives of the practitioners of an art form which was originally written by men for men but performed by women, who through their rather bawdy but expressive selves speak a lot about the gender demarcation, exploitation and the travails women go through. Bhushan wrote a eponymous book of these amazing life stories, ‘Sangeet Bari’ in Marathi, published by Rajhans Prakashan in 2014. The book and the film focus on the lives of these women and attempts to portray them as artistes and human beings unlike the popular image of a seductress or victims, says Bhushan who along with Savitri has been staging Sangeet Bari shows since five years, with both of them as narrators, giving nuggets of information about the lives of the dancers, their struggle and also excerpts from interviews with the patrons.

The songs, thousands of them, are also as old as the art form is. There is no written record, but is passed on through generations orally. Those songs on social themes do have some additions based on current affairs. The songs cover a variety of subjects from relationships, rituals, cravings to even the travails faced by a woman during her periods!

For those who understand Marathi, the lyrics are as raunchy as the dance! The nuances and subtleness of the feelings expressed will be surely lost in translation.

Though a pure dance form, these dancers have since many years been left stigmatised and oppressed. As Devdutt Pattanaik in an article says, when these dancers say they have customers and not audience, they reveal one of the deepest secrets of Natya Shastra, the two way relationship between the performer and the audience, which is not just sensory, emotional or intellectual but also commercial.

The word customer lends itself to a complete different meaning which isn’t true. Yes, when they are dancing to entertain men in a closed environment, our society isn’t mature enough to understand that it is not flesh trade! Here it’s only about dancing and singing. They are clear that they get paid for the entertainment they provide.

There are around 40 Sangeet Bari kendras across Maharashtra, where the Lavani women sing and dance. Each group has to wait for its turn to perform, hence the name Sangeet Bari.  It is unique as it is interspersed with dramatic narratives, reflecting the lives and experiences of the dancers. What makes it so interactive, is the direct interaction with the audience. Most of the dancers who are also competent singers communicate through their singing, acting and dances displaying all the Navarasas, with the Shringar and Hasya rasas used more often than other rasas. These dances deal with a woman’s sexuality in a direct, unabashed but graceful way.

Even dance forms like Kathak, evolved in the mujras. But many such dance forms, were sort of classicalised, cleaned sanitised  by some, leaving the system behind and taking only the art form. The communities were left to fend for themselves and the dance forms were refined, polished and put in a upper caste frame work, which today, enjoys a very good reputation. In case of Lavani, this polishing, refining hasn’t happened yet and people have wrong perceptions, leaving them stigmatised and oppressed says Bhushan.

Most women who start dancing in the Sangeet Bari Kala Kendras belong to nomadic tribes such as Bhatu Kolhati, Dombari and Kalwaat. While Kolhati and Dombari are Hindus, the Kalwaat tribe consist mainly of Muslim women. The girls are initiated into the Lavani at a tender age by tying a ghungroo (anklets) after which they aren’t allowed to marry. They may, if they wish, be under the patronage of a man they like, whom they refer to as Malik. Though he is supposed to take care, most of the times the women are left to fend for themselves. The children take on the name of their mothers, who fends for the entire family in this matriarchal system.

Shankuntalabai Nagarkar, or Shakkubai as she’s lovingly called, now at 60, sets the stage on fire with her completely electrifying and flirtatious moves with such ease, which goes on to prove that she is a paragon of seduction when on stage.

Jab tak pav me jaan hain, tab tak nachoongi (Until I have strength in my feet, I will dance), says Shakkubai who tied the ghungroo at age 5 and is a Sangeet Natak Akademi winner. She has two daughters who are married and didn’t take up this profession. Her son works in Pune and the children have no qualms about her profession.

Quiz her about having to deal with a Malik and not a husband, she remains unruffled. “Yes, we would like to marry and get settled, But then its a profession I had to get into and there is nothing shameful about it. Its an art like any other. I need to follow rules here and can’t have a  husband. Yes I do have problems with the legally wedded wife of my patron, but life moves on. I have taken up this as a career and enjoy doing what I am doing,” says the affable Shakkubai.

There are several different genres from spiritual to social themes. Many a time, the men want us to sing bhajans!

How does she deal with vulgar comments? “Oh! I give them back in my own way and put them in their place,” Shakkubai says adding we aren’t women on the loose. We are artistes who provide entertainment. While many other dancers give 7-8 performances per day in a baithak, Shakkubai has since stopped dancing in the Kala Kendras and performs only in Bhushan and Savitri’s troupe.

Pushpa Satarkar, also from a family of Lavani artistes belongs to the Dombari community where they are allowed to marry, but amongst their own community.

She too has been dancing since more than three decades and feels that off late the form has been slowly gathering a new perspective and people aren’t as critical about is as before. “We don’t lead an extremely marginal lives like before”, she says with a sense of relief. Apart from Lavani, Pushpa has trained in other dance forms too.

Akanksha Kadam, who was the show stealer does not belong to a Lavani family. Active in theatre and stage shows from a young age, she was coaxed by a friend to start learning Lavani, as she was so expressive. Akanksha learnt the form and teaches others and has taken it up as a career. Many girls today are learning Lavani, like other forms of dance, not bothering about any kind of stigma. She has worked in a lot of shows with traditional Lavani artistes, who are so talented.

“Yes I do feel they need to get married and settle down and not be at the mercy of some Malik. But many a time, men can live off their earnings and dominate so much… It is better off staying unmarried and live happily,” she adds.

Lathabai Waikar, the singer in the group started singing after she dropped out of School. Her aunts, sisters are all Lavani dancers, but she preferred to sing for them. “After a point everything becomes a routine…nothing ruffles you or excites you. We learn to bear with them all,” she says with a straight face, when asked about the kind of people who are regulars at the baithaks.

In spite of all the stigmas attached, there have been many women who have risen above all the troubles and stigmas and dancers like Padma Shri Yamuna Waikar, Roshan Satarkar, Lakshmi Kohlapurkar and others have been recognised widely.