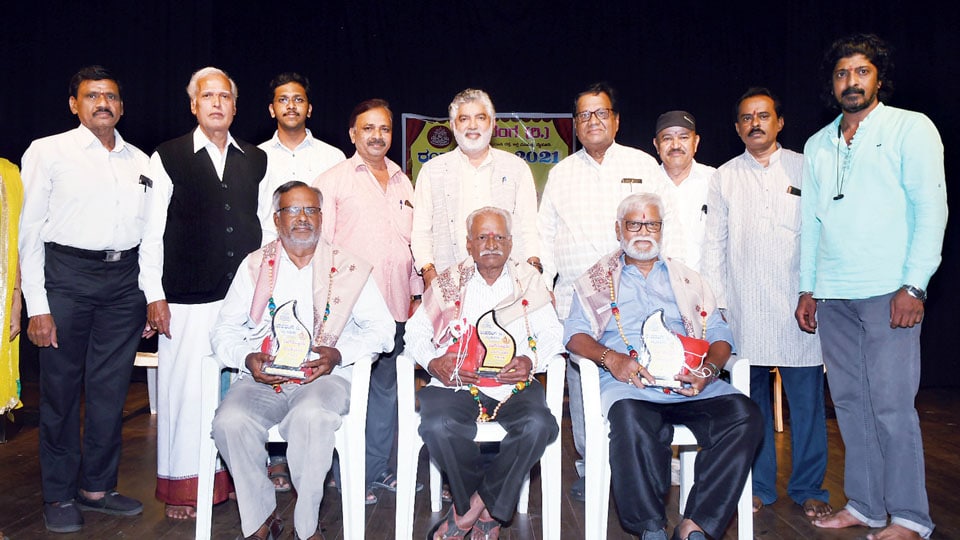 Mysore/Mysuru: Observing that people should stay away from the controversies created by political parties and the visual media, Rangayana Mysuru Director Addanda C. Cariappa said that the theatre helps people to get some sort of relief from tensions.

He was speaking after launching ‘Ranga Sambhrama-2021,’ a week-long Mythological, Social and Folk Theatre Festival, organised by Nadaranga in association with the Kannada and Culture Department at Kiru Rangamandira (Mini Theatre) in Kalamandira premises here on Monday.

Regretting that the trend of some to create controversies by taking up the names of dead personalities, Cariappa said it is not correct to hurt the sentiments of people by raising unwarranted controversies.

Maintaining that the theatre is one of the remedies for people to get relief from stress and strains of their daily life, he noted that keeping in touch with the theatre will help people in getting good sleep in the night.

Bemoaning the tendency of the visual media to keep controversies alive by repeatedly broadcasting them throughout day and night, he said that such sort of broadcasts will hurt the sound sleep of the common man.

Appealing the people to watch plays during the Theatre Fest, he took strong exception to the unnecessary controversies that are being created in the name of dead personalities.

Hitting out at the visual media for giving prominence to small controversies or misgivings and family disputes, Cariappa  wondered whether all these were needed for the society.

Pointing out that literary greats such as Shakespeare, Sarvajna and D.V. Gundappa (DVG) have termed the entire Earth as a theatre, he said that people should opt for watching plays in order to clear their minds of any bad thoughts.