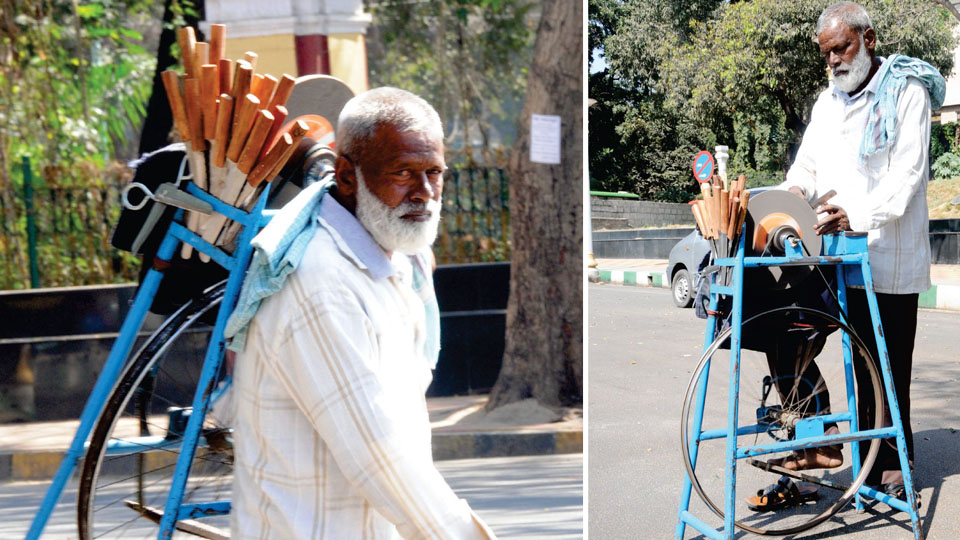 Living off a Sharp Edge

Circa 1985: A housewife desperately waits in front of her house for a knife sharpener who carries the cycle-wheel-powered machine that has a round and rotating stone slab. She is getting impatient as she has to finish her cooking and her iron knife is not sharp enough to cut vegetables and meat.

Circa 2018: A man who sharpens iron knives with his machine on his shoulders searches for customers. He goes door-to-door looking for potential customers and the reply he gets make him worried. Nobody uses iron knives now-a-days as all have switched over to sparkling and stainless steel knives.

Prominent among trades that are dying is the knife sharpening trade. About 20 years ago, one could often see these knife sharpeners, sharpening knives and scissors, for everyone, from the household women to butchers and fruit vendors. He does it all, with his strange, wooden machine that he peddles with his foot.

The round stone slab that is mounted on top of the machine rotates and is powered by a wheel of a cycle fixed to a wooden pedal. The moment he pushes the pedals with his legs, the wheels of the cycle rotates so does the round stone slab. He sharpens knives by touching the edges of the stone slab with the knife. His job is simple and works on the principles of friction.

Now-a-days in Mysuru it is very rare that we see such knife sharpeners. Most of the chakuwallahs or knife sharpeners have either found other occupations or have retired and the trade is now on the verge of extinction with only a handful of them left in city. Moreover, knife sharpeners are dissuading their children from joining the trade due to lack of business.

Says 65-year-old Mehmood Pasha, a knife sharpener and a resident of Ghousianagar in Mysuru: “My joints hurt from the pedalling and my shoulders pain as I carry the heavy equipment to earn a living. I have no other option as I have to feed my family.”

He recalls that about 12 to 15 years ago, people used to wait for him to get their iron knives sharpened but now, he has to depend only on tailors and hair cutting saloons as it is only they who get their scissors sharpened. He says with a wry smile: “Stainless steel has snatched away my livelihood.”

Stating that he earns Rs.200 to Rs.350 a day now, Pasha said: “I cannot increase the charges of knife sharpening now and then. There will be no customer in that case.” He said that he travels to Gonikoppal and Kushalnagar in Kodagu, Sullia, Puttur, Udupi, Mangaluru and other coastal places. When asked why he has to travel to coastal areas to earn money when he can do the same job in the surrounding places of Mysuru, Pasha explains that as large scale fishing happens in coastal places, fishermen there use iron knives which needs to be sharpened regularly.

Pasha, who is in this profession for the last 45 years, says that knife sharpening trade is no longer a profitable business because of the entry of stainless steel blades in market.

When told that he could take loans through the Minority Welfare Department and establish his own motorised sharpening unit in city, Pasha says: “Though the Minority Department sanctions the loan, it is the Banks which has to give the loan and they ask for surety. I being a poor person cannot give any surety. We are destined to remain the same.”

In a world where people are shifting jobs, running after ‘perfect’ careers, creative fields, tonnes of money and other pleasures, this man finds everything in the simple task of giving the right edge to cutting instruments.

“I am poor but I am satisfied and happy with whatever Allah has given me,” says Pasha as he takes leave to find new customers. It is an undying motivation to go on doing something so ordinary with extraordinary and rare happiness.