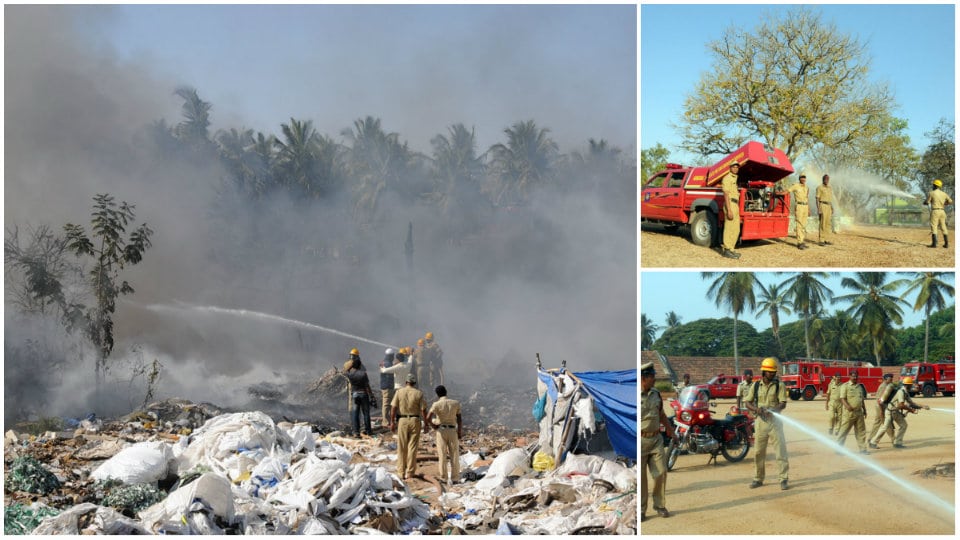 How you react in the event of fire depends on how well you have prepared for a fire emergency. It is summer now and this is the time when most fires are caused due to dry vegetation and careless human attitude. Whenever there is a fire, it is very simple for us to dial ‘101’ without even realising what happens after our call and how do firemen land at the place of fire to rescue lives and properties before they are reduced to ashes. This Weekend Star Supplement throws light on the functioning of the Mysuru Division Fire Department during an emergency.

Putting out a fire is a common phrase used by businesspeople and professionals every other day. But what if the fire is more than a metaphor? Do you know what to do to lessen the likelihood of a fire breaking out — and how to react if one does?

Better be prepared as summer is here and it is the season of fire, the one which burns, destroys and kills. The onset of summer has led to increase in fire incidents in the city, keeping fire force personnel on their toes – 24/7. And mind you, they have to rush whenever they are called. Otherwise they will have to take the blame of “arriving late” or “dereliction of duty”. Or worse they will have to face the public wrath for not coming on time.

Year after year, people are dying in fire incidents that are termed ‘accidents’ which are actually man-made disasters. According to National Crime Records Bureau, 17,700 Indians died – 48 people every day – due to fire accidents in 2015. 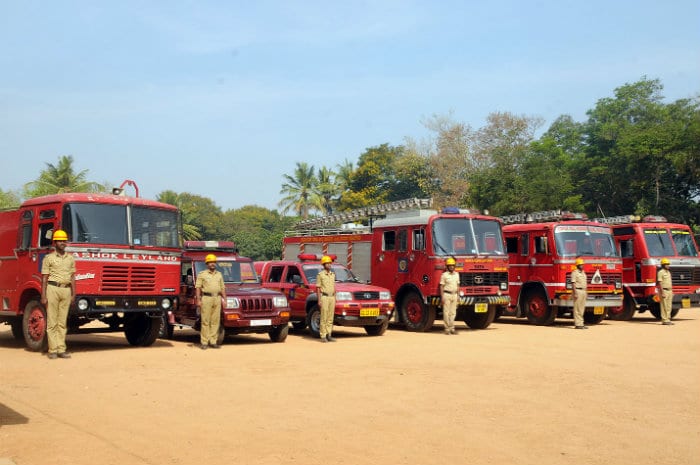 In a city like Mysuru too, most of the fires are man-made as a majority of fire incidents are reported from vacant plots overrun with weeds and dry vegetation where a tiny spark can set off a major fire. These vacant plots are used as dumping grounds and when the weeds dry, they become a perfect place for summer fire. If weeds and garbage at vacant plots are set on fire, there is a danger of the fire spreading to the neighbouring house.

So what happens when a fire breaks out? While the destruction part is taken care by the inferno, dousing it is a major challenge for Fire and Emergency Services personnel. There are many tricky and dangerous situations where firemen have to battle it out without even thinking about their own safety. But usually, these firemen take precautions and handle crisis situation deftly without harming themselves. And they usually keep their cool when the tempers of people flare high amidst burning fire.

“Decision-making is critical in fire emergencies and our Fire and Emergency Services staff are prepared to tackle any fire incidents with the co-operation of the public,” says District Fire Officer K.P. Gururaj.

Speaking to Star of Mysore, Gururaj said that the city has four fire stations and with the city growing fast in all directions adding new extensions, there is an urgent need for one more Fire Station. 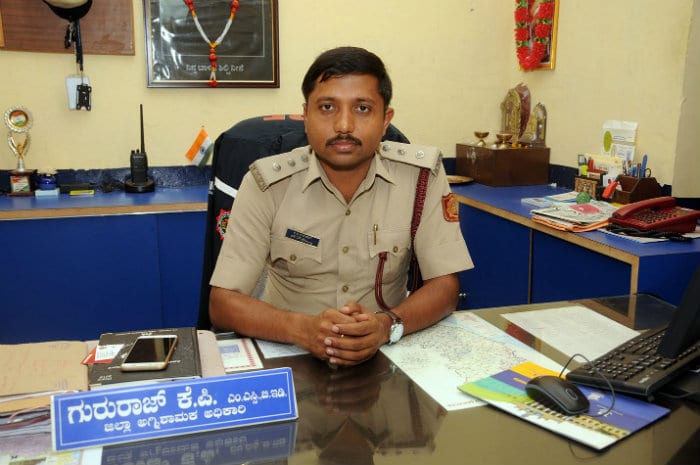 Sourcing water is a tough task during emergencies as fire tenders have to rush to Vani Vilas Water Works (VVWW) to refill the tankers whenever water gets exhausted. A lot of time is wasted here as the fire tenders will have to rush to VVWW from the place of emergency to refill water. “The Mysuru City Corporation (MCC) should provide us with Water Hydrant System (water filling points) at vantage points in city so that we can refill the tankers and rush back to douse the fire,” says Gururaj.

The effective response during emergencies depends on the amount of planning, training and drilling previously performed. Identifying key elements of a fire emergency preparation plan starts with the development of a written plan. The emergency preparedness plan should address all potential emergencies that can be anticipated, he said. A fireman checking the equipment arranged in a fire tender before proceeding for fire dousing operation.

“Grassfire is one of our biggest risks and challenges this season. There is huge grass growth across the city which is dry now and they stand in a ready-to-burn state. My message to the residents is not to set fire to grass and garbage as the chances of fire spreading is high. And once spread, it is difficult to control,” Gururaj said.

According to Saraswathipuram Fire Station Officer Nagaraj Urs, grassfire and garbage fire are major concerns during summer as they can be easily ignited by the carelessness of a smoker or by those who set fire to garbage piles without realising consequences. 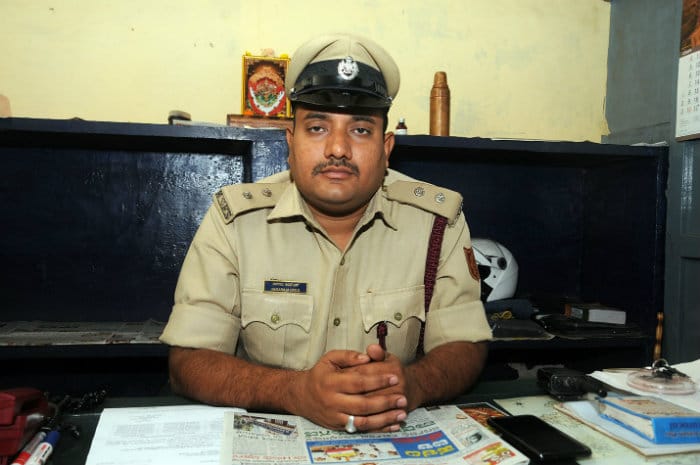 Grassfires can start quickly and spread rapidly catching people off-guard and grassfires are very hot and can produce huge amounts of heat that can kill anyone caught in the open. “The safest place to be during a grassfire is well away from the fire. When in the vicinity of a grassfire, keep in mind that the burnt ground is a safe refuge. If you are threatened by a grassfire, always protect yourself by covering up all exposed skin with protective clothing,” he said.

A No Objection Certificate (NOC) from the Department of Fire and Emergency Services is another key requirement for high-rise building projects. To get this, the National Building Code of India (fire and life safety) requires such buildings to be equipped with at least two staircases and two lifts. Besides, high-rises should give enough space/setbacks in front, sides and rear part.

Over 160 high-rise buildings in Mysuru including residential apartments, hotels, hospitals and industries have violated safety norms.

District Fire Officer Gururaj said that the MCC must seek the approval of the Fire Department and then issue the necessary documents the builder seeks, which is not happening.

“In most places, there is hardly space available for the fire tender to go inside in case of emergency, we have to station our vehicles outside to conduct rescue and extinguishing operations,” Gururaj said.

He further said that some builders have obtained all types of licenses but have failed to construct as per the norms. He said that there is a need for Aerial Ladder Platform (ALP) as there are high-rise buildings with more than 50 metres in height and the present ladder-fitted-fire-tender cannot reach the height to douse fire. 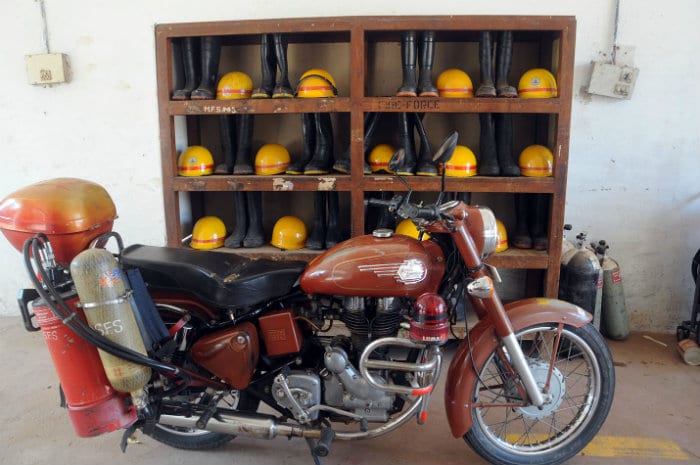 Forest fires were the major cause for devastation of the environment. Keeping this in mind, the Fire and Emergency Service Department has deployed 17 fire tenders at many forests including Bandipur Tiger Reserve and Nagarahole National Park.

Though forests don’t come under the purview of the Fire Department, fire tenders have been deployed in many forests as forest fires are dangerous. The Forest Department has been asked to purchase fire tenders for their own use and the machines will be maintained by the Fire Department.

District Fire Officer Gururaj said that there are 11 emergency lines for number ‘101’ at Saraswathipuram Fire Station. All the lines receive about 800 calls a day out of which nearly 400 calls are useless.

He said that majority of children make such calls to ‘101’ and just say ‘Hello’ and hold the receiver without bothering to disconnect the call. He urged parents not to give their mobile phones to children and also lock the dial pad of landline phones to prevent children from making such calls.

He said that a total of 210 actual fire calls were attended by all the three fire stations from Jan. 2018 till Mar. 8. He added that majority of fire calls were for grass fires, garbage fires, electricity-related fires and electric chimney fire in hotels.

The Fire Department provides emergency services 24×7 and fire personnel, who were earlier working in two shifts, were now working in three shifts of eight hours per shift.

Water extinguishers are one of the most cost-effective ways to fight ‘Class A’ fires those fuelled by solid materials such as paper, wood and textiles.

Powder extinguishers are good multi-purpose fire extinguishers because they can be used on ‘Class A’, ‘Class B’ and ‘Class C’ fires caused by electrical equipment. However, they do not completely extinguish and cool the fire and hence can re-ignite.

Carbon Dioxide fire extinguishers extinguish fire by taking away the oxygen element of the fire triangle and also by removing the heat with a very cold discharge. Carbon Dioxide can be used on ‘Class B’ and ‘Class C’ fires. They are usually ineffective on ‘Class A’ fires.

Fire blankets are made of fire-resistant materials. They are particularly useful for smothering fat pan fires or for wrapping around a person whose clothing is on fire. 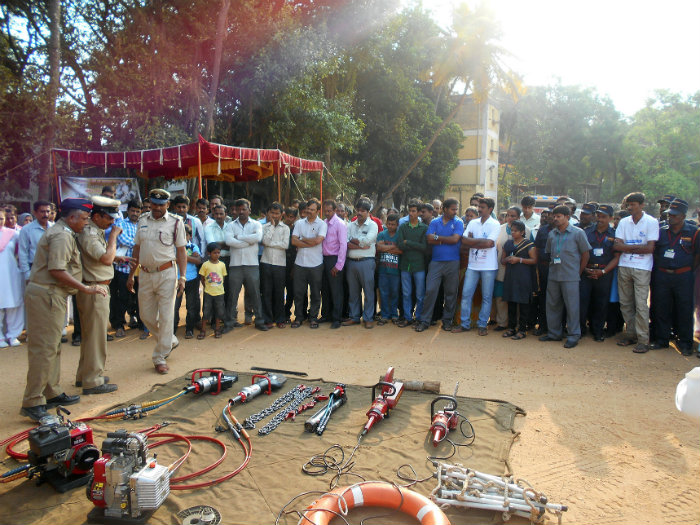 Every year, fire destroys thousands of acres and wildlife habitats. Some fires are started deliberately but most are due to carelessness. Some of the simple measures to avoid fire are: 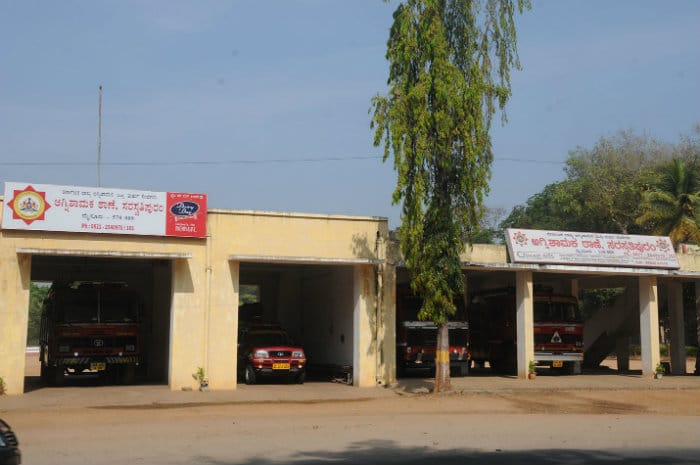